THINKING of getting away this Christmas? Whether you fancy going abroad or staying in this country, there is a great selection of holidays available for families and couples during the festive period. 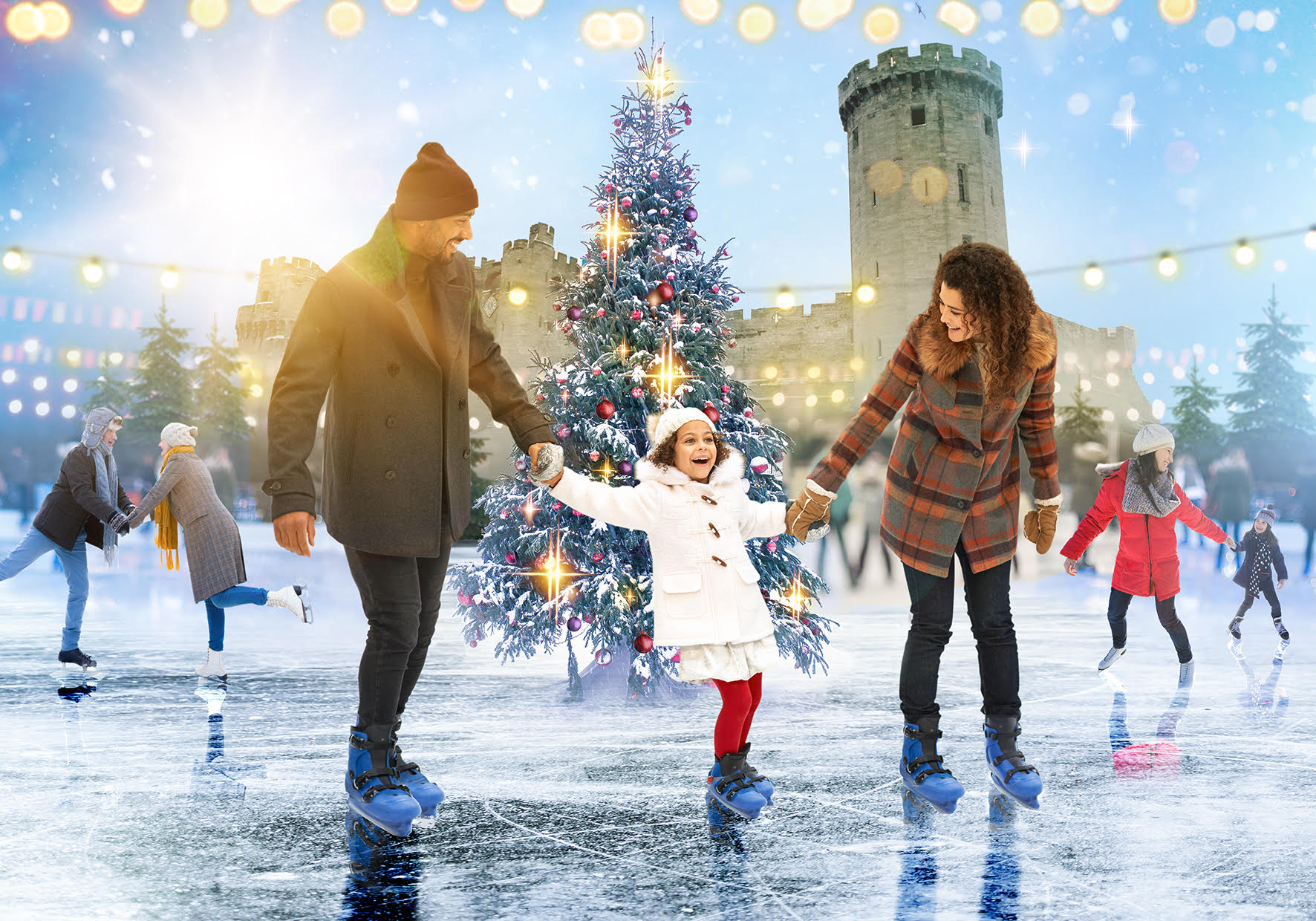 CHRISTMAS in the Canaries has a certain ring to it. With Tenerife’s temperatures in the 20s, you will have plenty of sunshine for leisurely walks on the beach – and no turkey to cook.

If you fancy going out on Christmas Day, head for the Loro Parque zoo and aquarium or the world’s No1 water park, Siam Park. 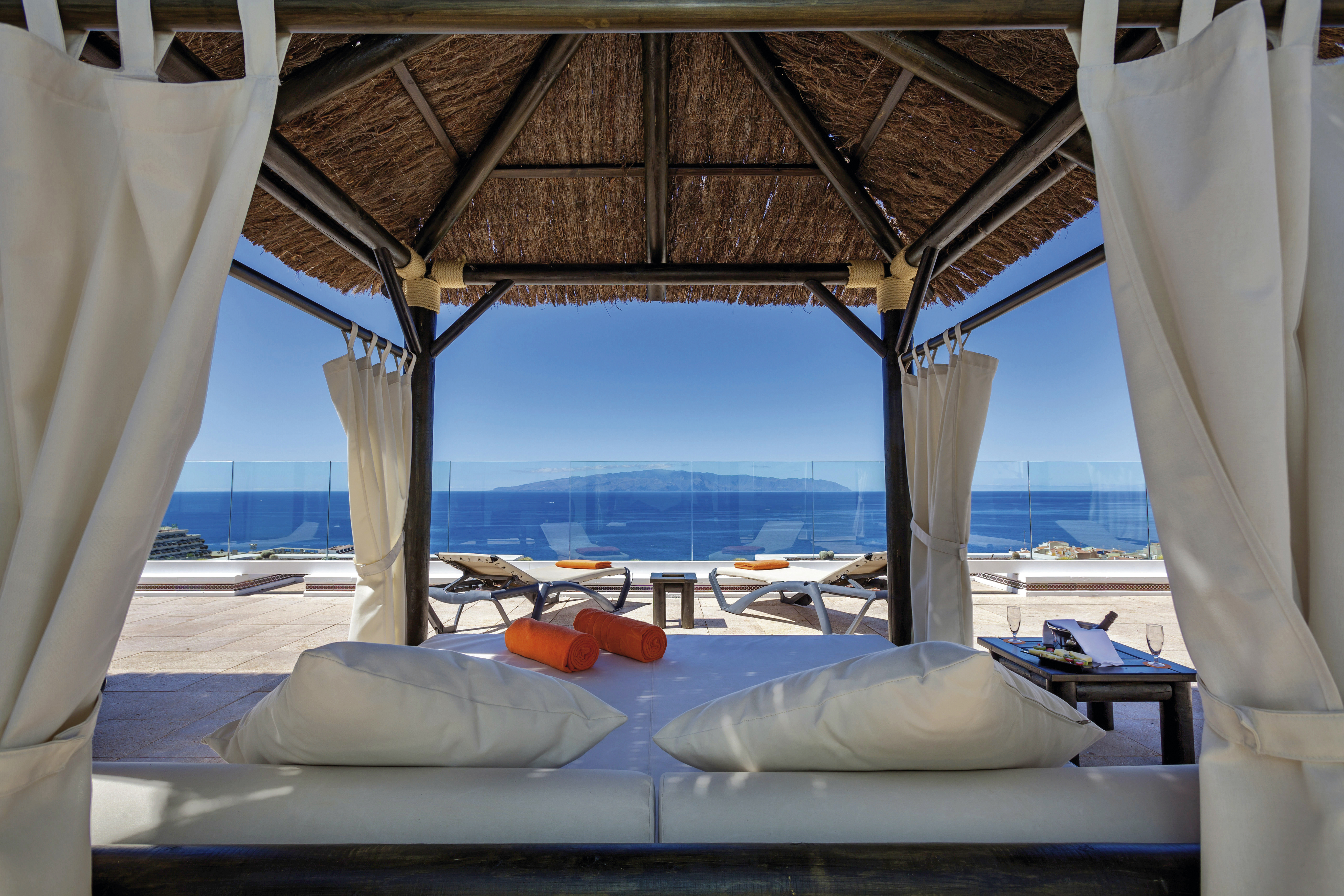 Or, if you like a white Christmas, take a Boxing Day guided tour of Mount Teide National Park, including a cable car to the snow-covered summit.

You will find that most excursions, including whale and dolphin watching boat trips, still run over Christmas, and bars and restaurants stay open.

There’s even more entertainment at the 4T+ Be Live Family Costa Los Gigantes.

GO: Seven nights’ all-inclusive at the 4T+ Be Live Family Costa Los Gigantes hotel, from Gatwick on December 22, is from £876 pp. See tui.co.uk.

CROSS the Channel to experience the festive season in France, visiting our closest neighbours’ Christmas markets by train.

The northern city of Lille has 90 wooden chalets teeming with decorations, gifts and local delicacies. You can tour Lille’s landmarks while sipping a glass of bubbly in a “traditional” Citroen 2CV. 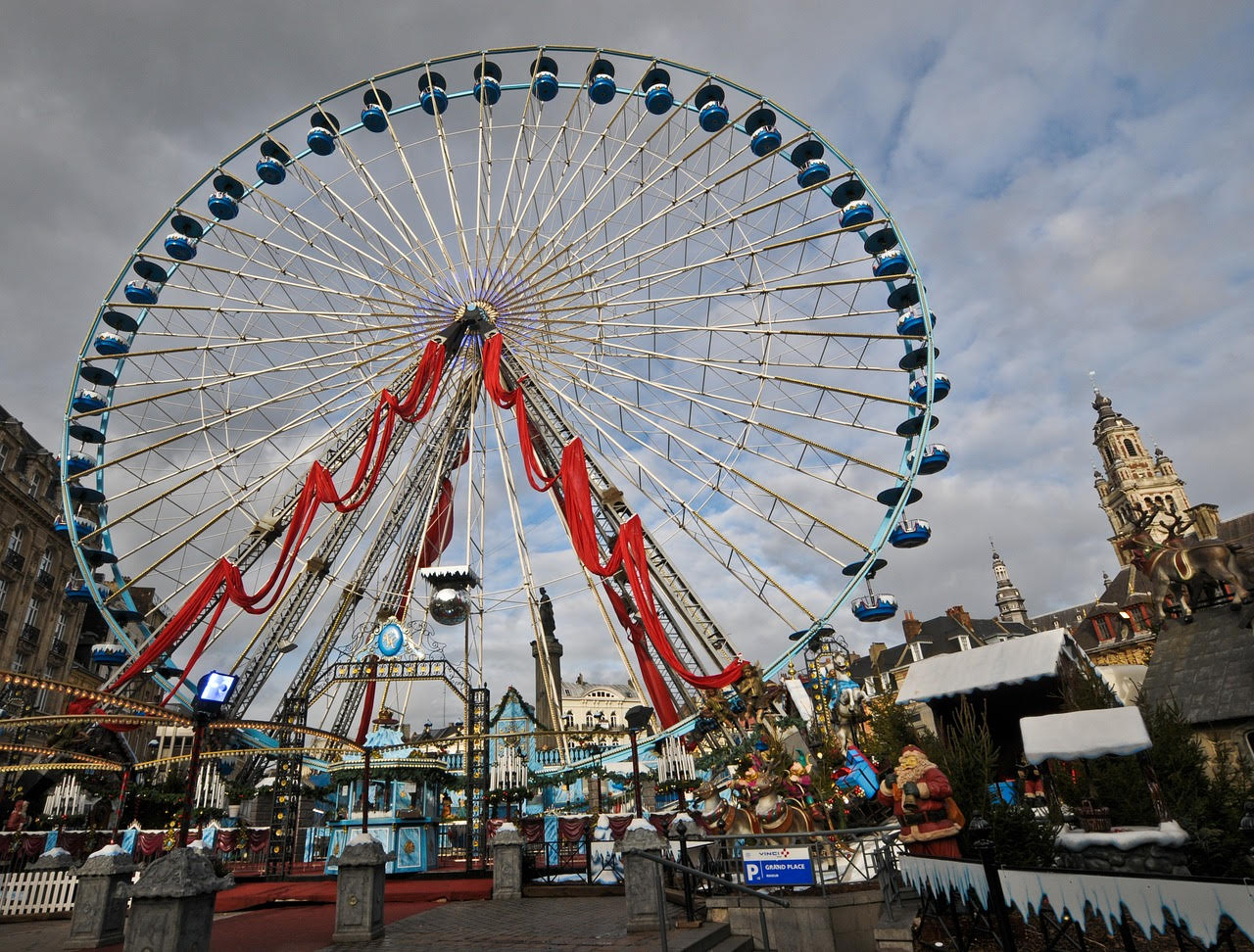 Catch a train to Dunkirk, where advent attractions include a Ferris wheel, a Christmas forest with elves and an ice rink.

Move on to Arras for crafts, jewellery and wooden toys before ending the tour in Amiens, where you will be treated to 130 chalets and a new sound-and-light show with beams illuminating the dizzying Gothis cathedral.

DECK the halls and decorate the, er, decks with fairy lights on a canal boat this Christmas.

There are loads of canals you can cruise on over the festive period, including the Grand Union, which connects London and Birmingham. 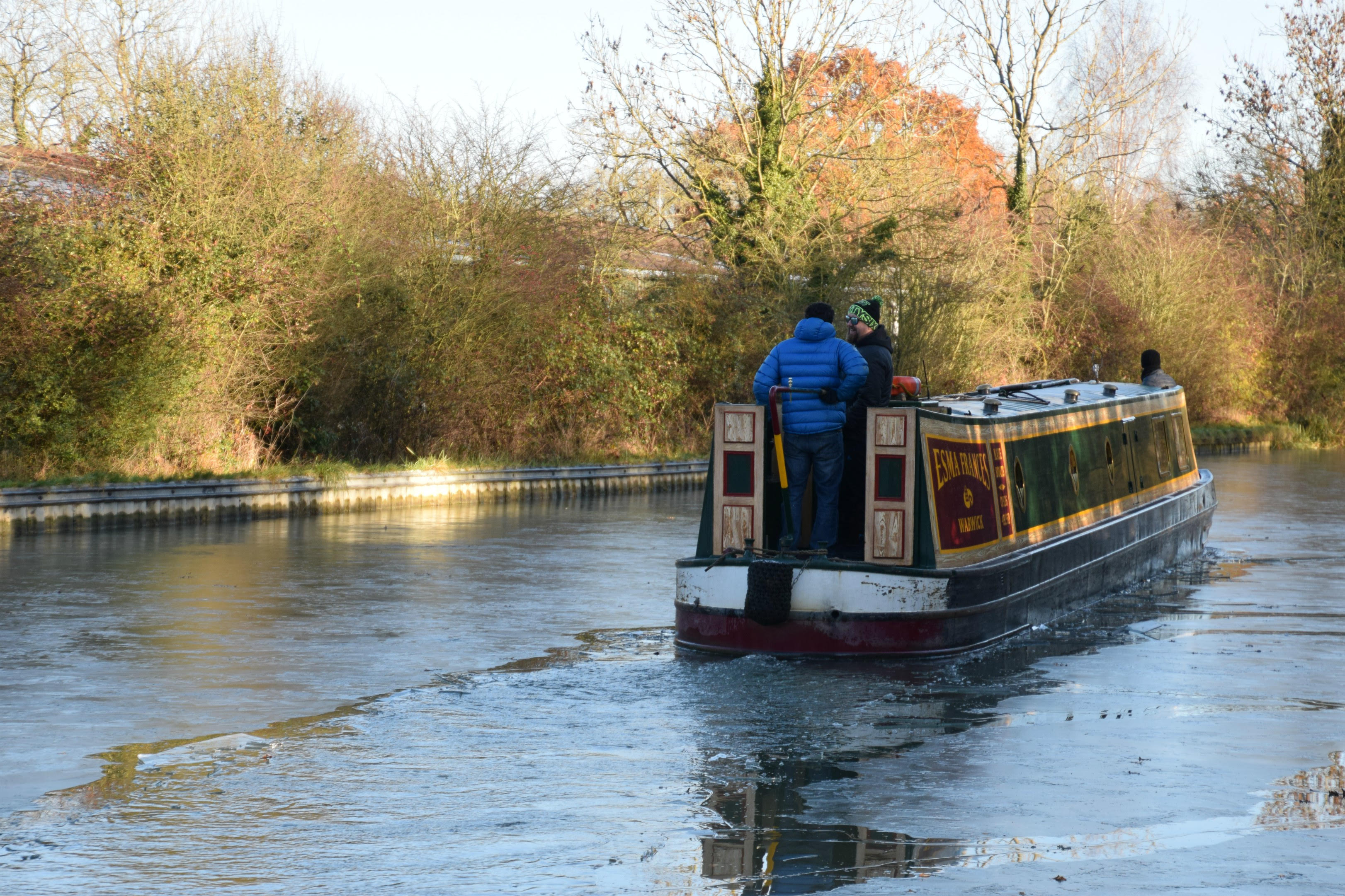 Boarding at the Drifters boat hire base in Stockton, Warks, chug to Warwick and back to explore its stunning castle on the banks of the River Avon.

Over Christmas, visitors to Warwick Castle will find a 20ft tree in the Great Hall, a winter wedding in the Princess Tower, a spectacular show featuring birds of prey and a new ice rink.

Canalside pubs along the way include the Blue Lias Inn at the bottom of the Stockton Flight and the Cuttle Inn at Long Itchington.

SPEND Christmas night under the stars near Bethlehem . . .  in Wales!

The hamlet in Carmarthenshire has a welcome in the hillside for guests, and their dogs, looking to get away from it all. 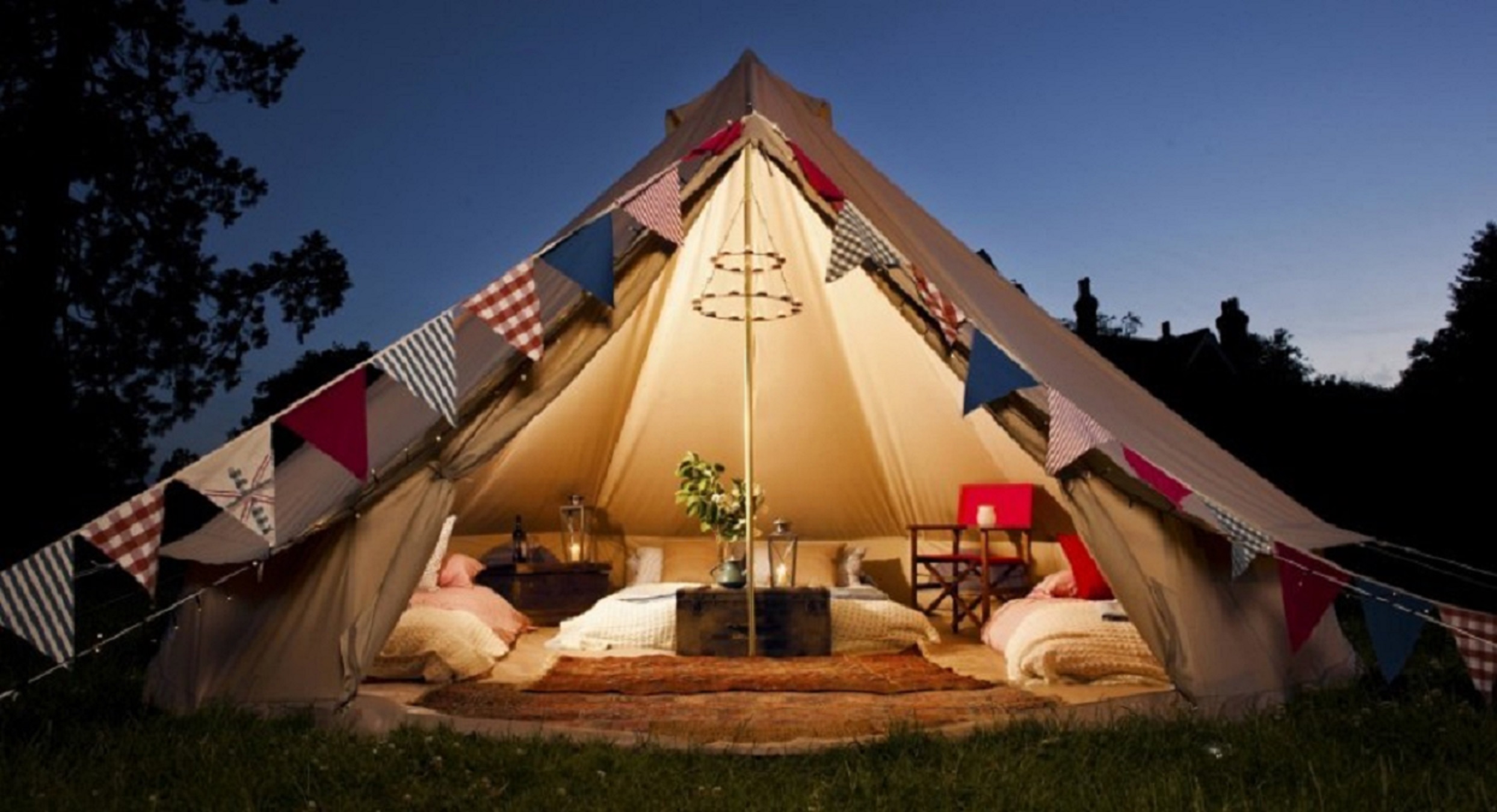 Base yourself at luxurious Oak Tree Farm Glamping in a fairy light-decorated bell tent with a cosy wood burner, a firepit for turkey spatchcock-style and local pubs open on Christmas Day.

Attractions within half an hour from the farm include the castle of Carreg Cennen and the vintage Gwili Steam Railway.

And if you prefer an active Christmas Day, go hiking or cycling in the Brecon Beacons or quad biking on the all-terrain course at Tycroes.

IMAGINE the kids’ faces when you tell them they are going to meet Santa – in Lapland.

The break starts with the youngsters writing a letter to the Big Man, who then opens their wish lists in front of them at a private audience. 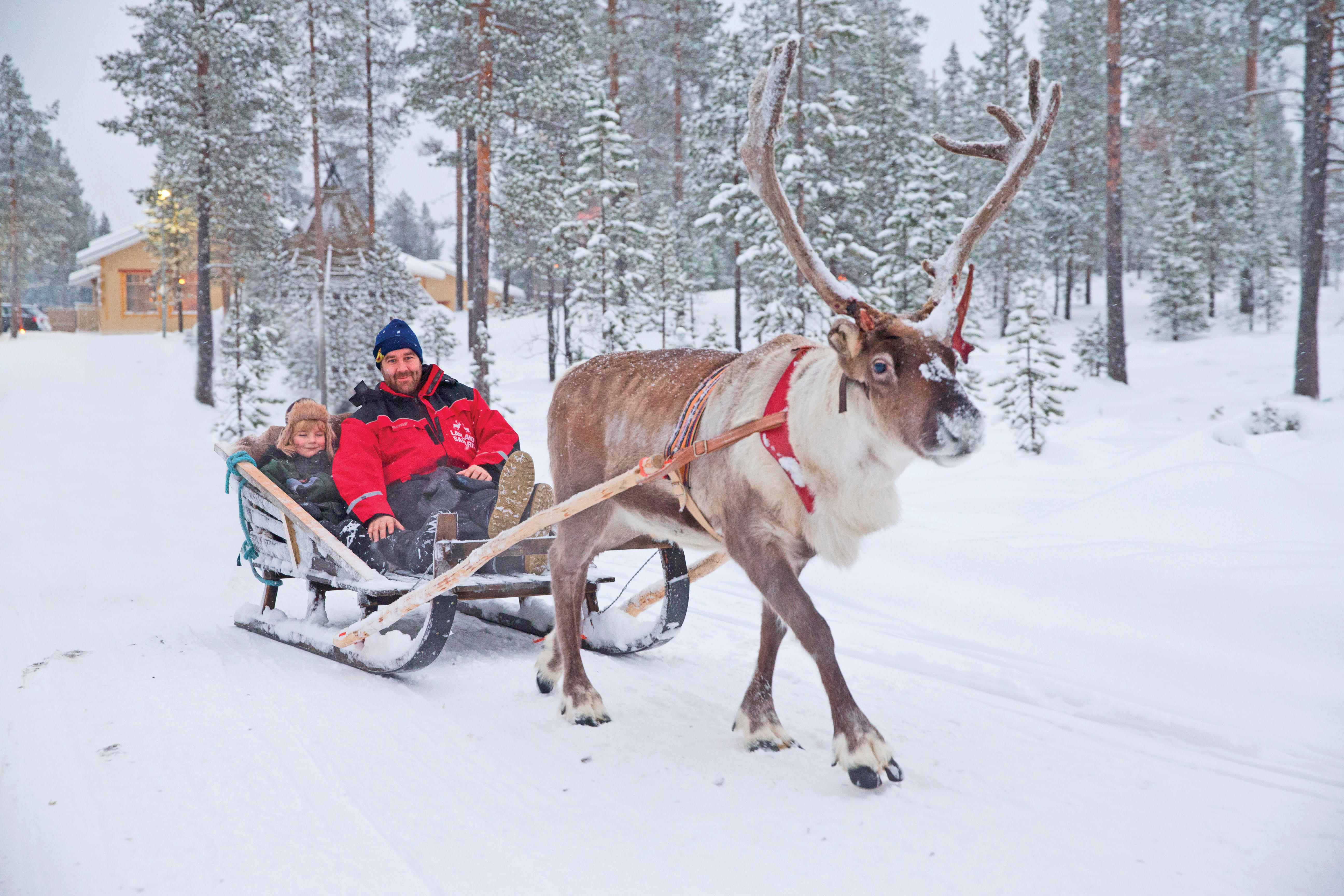 After flying over the Arctic Circle, families are met at Ivalo airport by reindeer and elves.

Wearing thermal suits, they try out snowy fun including husky sledding and reindeer sleigh rides through the Saariselka wood, tobogganing and hockey.

Families meet Santa in his log cabin and are given a special Lapland present.

GO: A three-day break including half-board at the 4H Hotel Tunturi, plus flights from Luton on December 2, is from £2,386 for two adults and two children. Or take a four-day break at Hotel Riekonlinna departing Birmingham on December 7 from £3,656. See santaslapland.com.

NEVER mind turkey and trimmings . . . The Commodore, a family-run pub in Grange-over-Sands, Cumbria, is serving a whopping TWO-POUND pig-in-a-blanket, entombed in a huge Yorkshire pudding, with the rest of a festive meal on top.

Charlotte Hargan, the pub’s boss, says: “Pigs-in-blankets are a festive treat to behold. It’s a Christmas lunch for those with the appetite of a lion.” 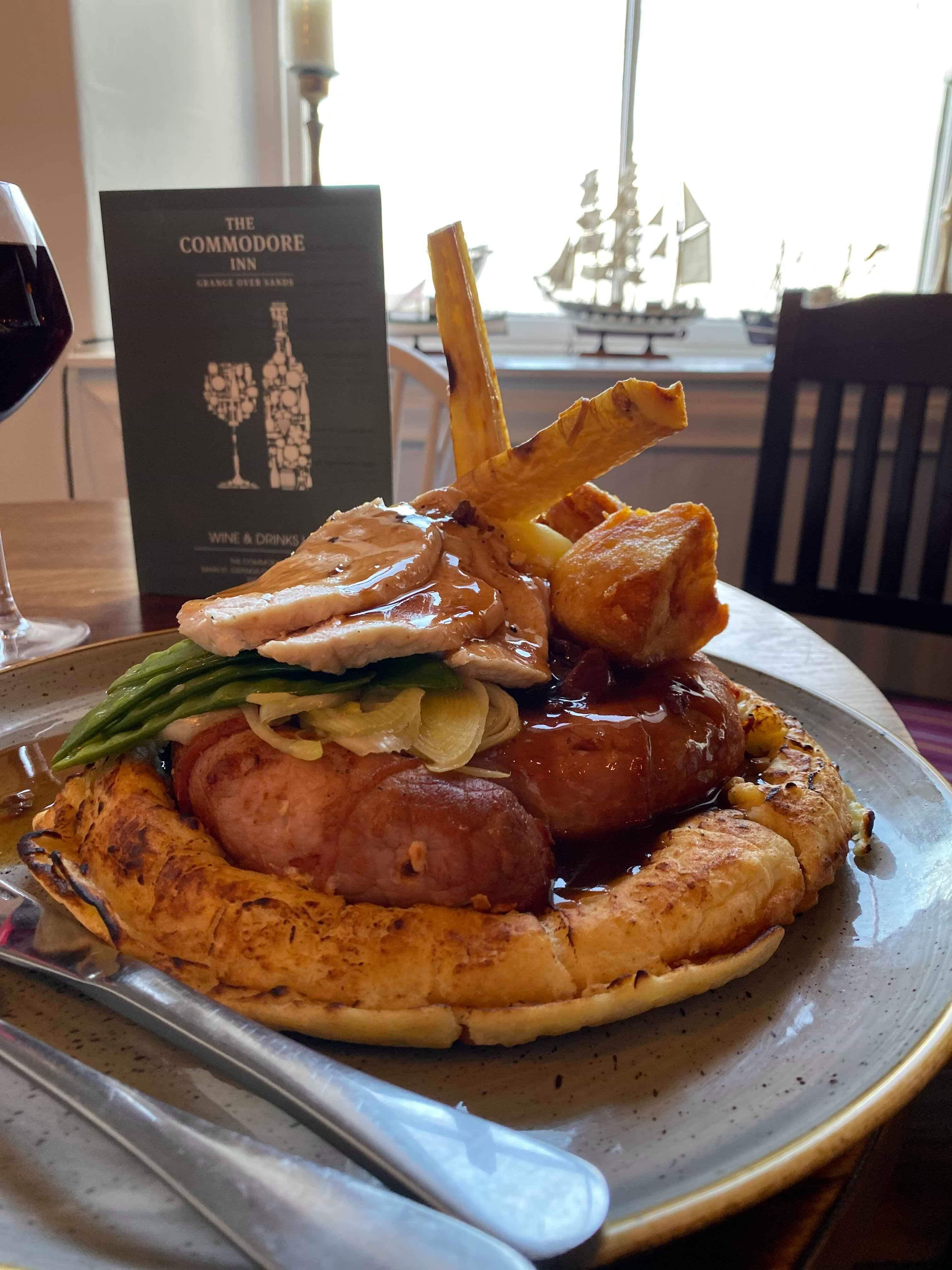 Wash down the feast with one of the ales from the pub’s sister brewery Stringers.

Enjoy a pre-Christmas break at the inn, situated on the edge of the Lake District, overlooking Morecambe Bay.

GO: Christmas lunch from December 6 is from £14.99, with the special from £29.99. A double room costs from £50 for the night. Find out more – and whet your appetite for dinner – at thecommodoreinn.co.uk.

TAKE the stress out of Christmas, with no shopping, cooking or decorating the house. Head for the high seas instead.

P&O Cruises will be roasting 1,100 turkeys on its ships on Christmas Day, popping 600 bottles of bubbly to wash it down. Its liners will be decorated, putting on pantomimes and screening festive films. Kids will enjoy the onboard grotto and parties – and, of course, Santa will be on board. 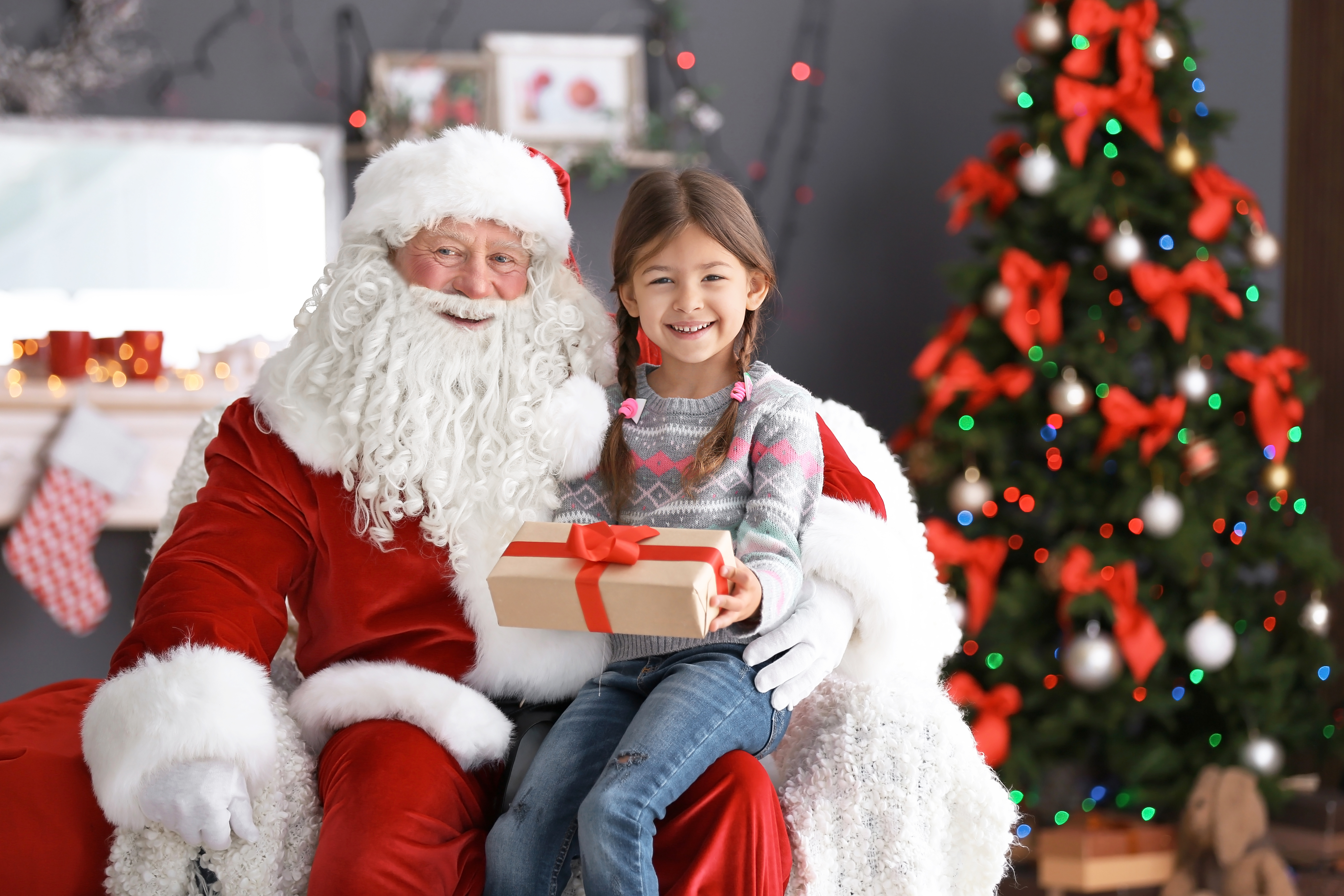 The cruise ship Ventura is a family favourite, offering non-stop entertainment including kids’ clubs (suitable from the age of five up) and teenage hang-outs.

There is a two-deck theatre, sports facilities, pools, casino, spa and a great selection of restaurants. After setting sail from Southampton, you will call at ports including Madeira and Lisbon.

There are discounts of up to 70 per cent on clothes, bags, electrical goods and bags as stores go discount wild on November 29. 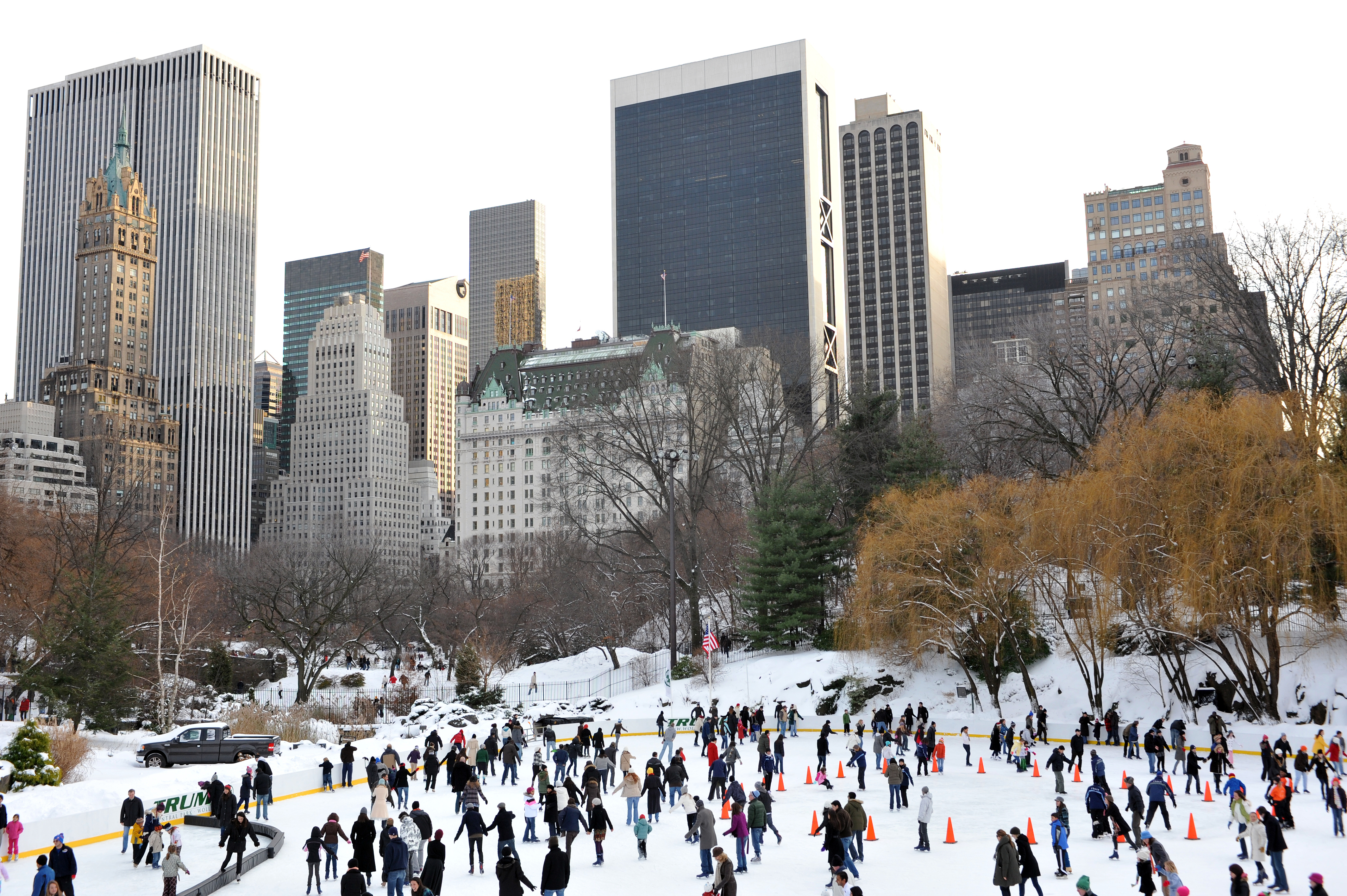 Macy’s also gives visitors a savings pass for an extra ten per cent off. Take a day trip to Woodbury Common Premium Outlets, which has 220 designer outlets with huge bargains.

Also, Empire Outlets has three round-trip shuttles a day from Westin Times Square to the free ferry to their Staten Island stores.

When all shopped out, enjoy Christmas in the Big Apple – the tree and ice rink at Rockefeller Center, the display in Central Park and events at Bronx Zoo. Or see the Christmas Spectacular starring the Radio City Rockettes.

IF YOUR dining table is just not big enough to seat the whole family for Christmas lunch, rent a house that has one.

Five-bedroom Skerries, sleeping ten people, in Strete, near Dartmouth in South Devon, has views over the fields to the sea. 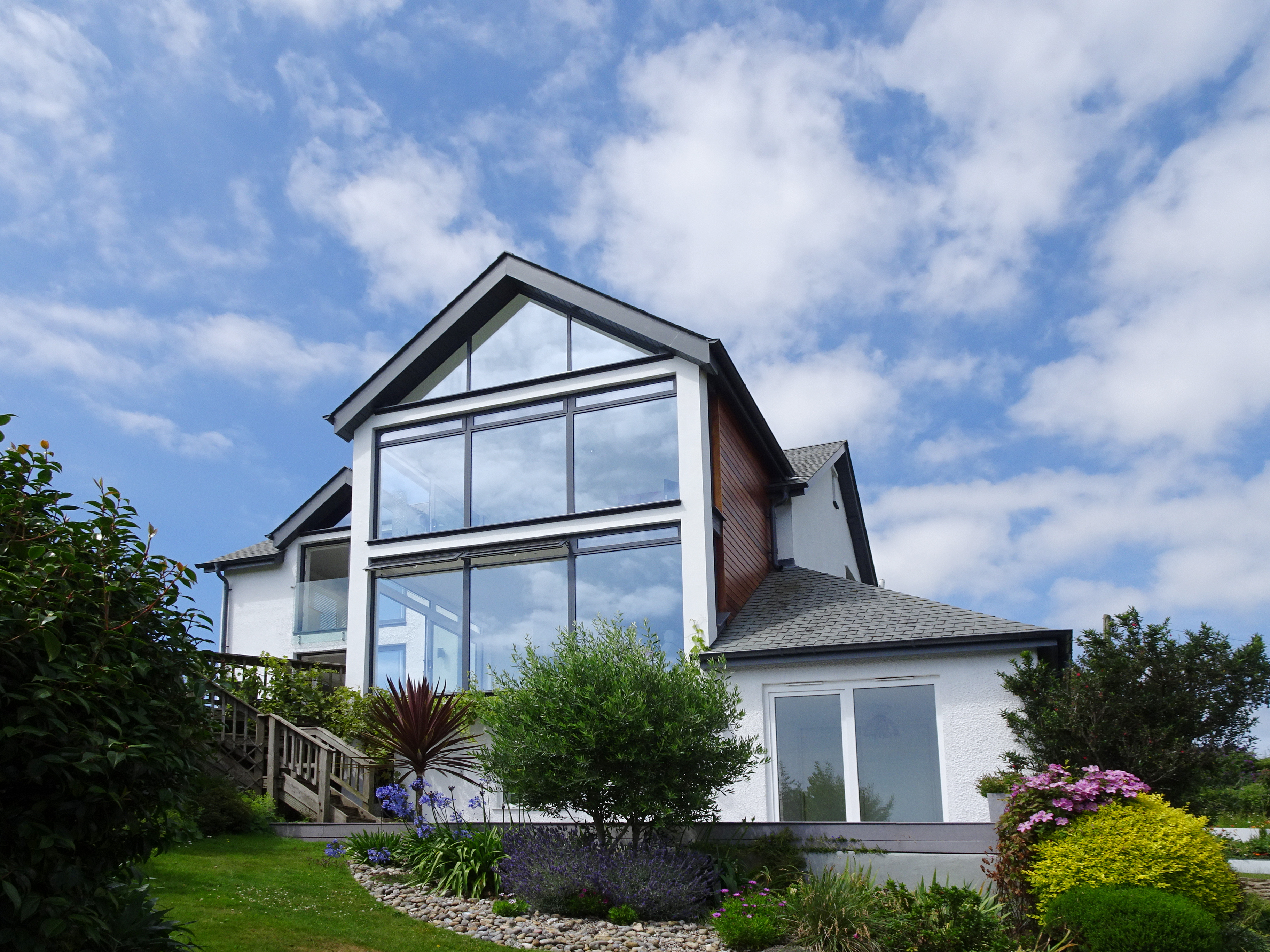 There is no shortage of Boxing Day walks to choose from in this Area of Outstanding Natural Beauty, around Dartmouth castle and along the River Dart.

And the beaches of Blackpool Sands and three-mile Slapton Sands are nearby.

Dartmouth offers great Christmas shopping from High Street names to antique and craft shops and galleries. There are also lots of bars and restaurants serving local food such as fresh seafood and Devonshire cream tea.

ONE of the best presents Santa could give anyone – Christmas in an award-winning luxury hotel.

Indulge yourself with a Christmas package at the Airds Hotel & Restaurant in Port Appin, overlooking Loch Linnhe and the Morvern Mountains on the west coast of Scotland. The break starts on Christmas Eve with home-made cakes and tea followed by a champagne five-course candlelit dinner. 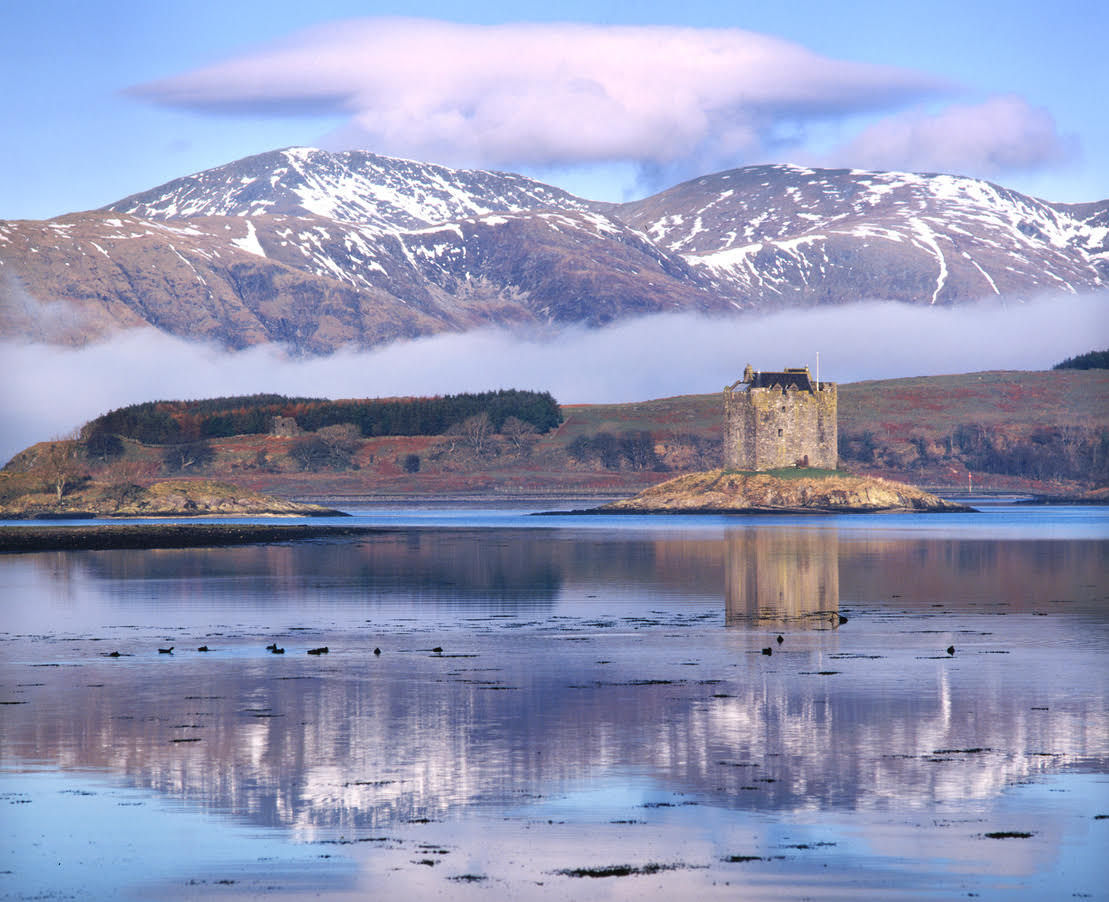 Wake up to Bucks Fizz and a Scottish breakfast with a late traditional lunch, a treasure hunt and the odd wee dram or two.

On Boxing Day, you can take it easy, eat when you like including tucking into mince pies washed down with mulled wine, and work off some of that Christmas fayre by exploring the spectacular Highlands on foot or bike.