On the map – generated using Google search data – country names have been supplemented by their residents’ most-searched-for cocktail. 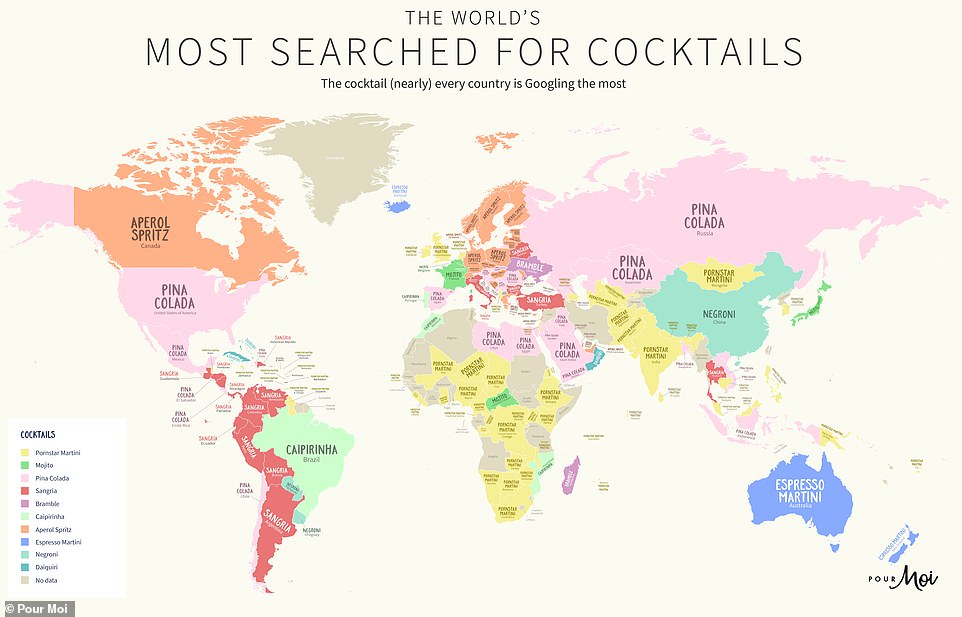 On this map, country names have been supplemented by their residents’ most-searched-for cocktail

The map has been drawn up by lingerie and swimwear brand Pour Moi, which used the Google data to establish the search volume in each country for terms associated with cocktails over one year.

Second-place Pina Colada, which originated in Puerto Rico, is a blend of coconut milk, pineapple juice and rum, and not only is it the firm favourite in the United States, but also in Russia and Mexico. 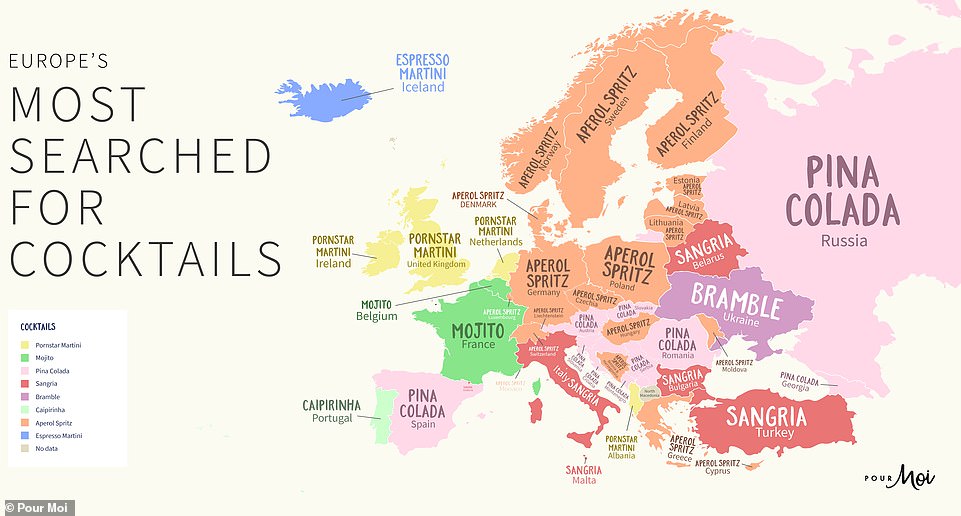 THE WORLD’S MOST POPULAR COCKTAIL CHOICES

Bronze medal winner Aperol Spritz, combining Aperol, prosecco and a dash of soda water, earned the number one spot in Germany and the United Arab Emirates.

Pour Moi said: ‘The distinctive orange cocktail of Aperol Spritz has taken the world by storm in recent years, but Italians have been loving this bubbly and bitter cocktail since 1919.’

Made with red wine and chopped fruit, Sangria (7.6million searches) is the fourth most popular cocktail, ranking in first place in Argentina and Thailand.

Fifth to the finish line is the Negroni (6.9million searches), a mixture of Campari, sweet red vermouth and gin that is favoured by Uruguay and Paraguay. 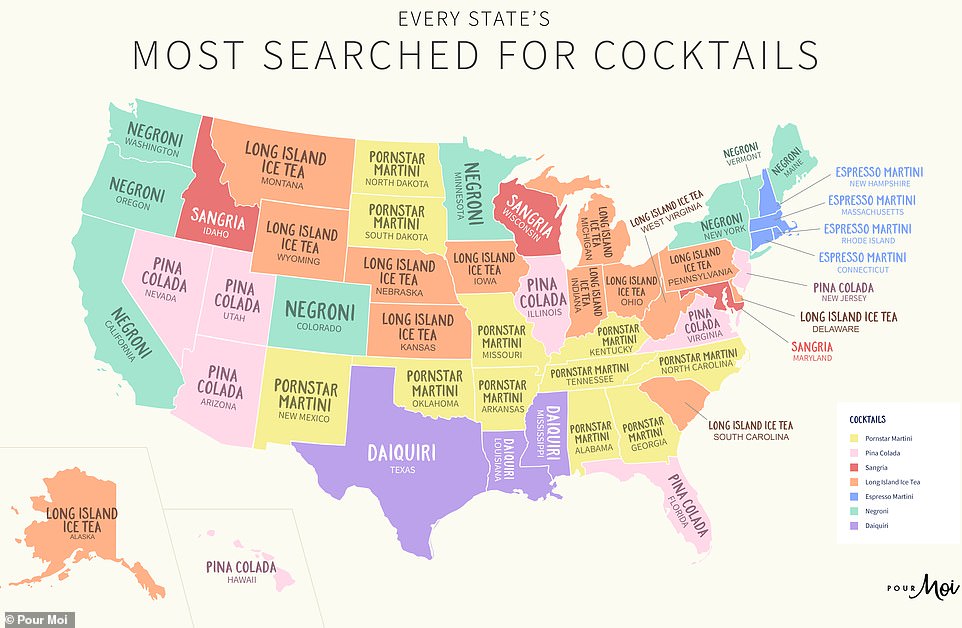 In the U.S, the preference for each state has been revealed – New Yorkers are keen on Negronis, while Texans drink Daiquiris

Top-rated in Brazil and Portugal and seventh overall, the Caipirinha (4.3million searches), is a refreshing combination of cachaca, sugar, and lime.

Next is the Daiquiri (3.8 million searches), beloved by Oman, Cuba and the Bahamas, and made with rum, citrus juice, and sugar.

As well as a world map, Pour Moi has also drawn up maps with regional breakdowns of the search data. 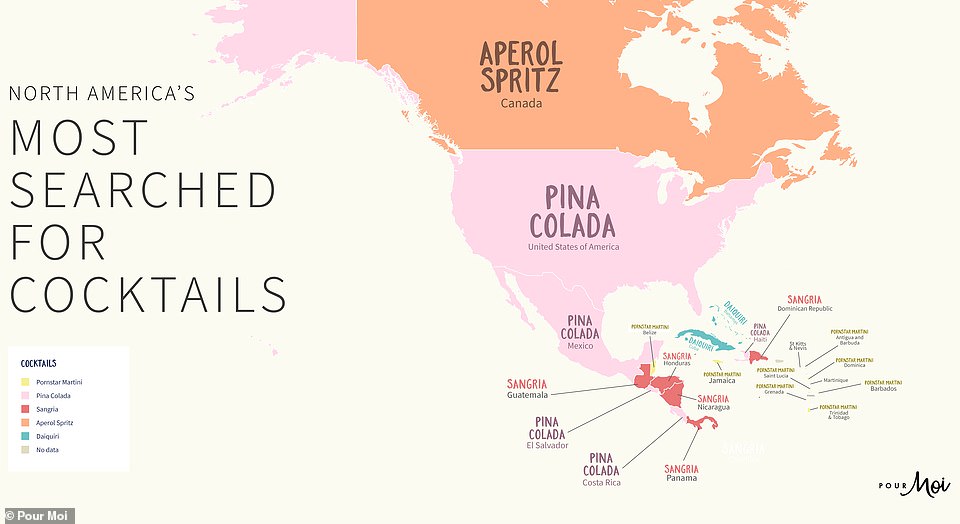 When it comes to Europe’s most-searched-for tipples, Aperol Spritz is the clear favourite in Scandinavia, while countries along the Mediterranean are more divided – Italy and Malta fancy a glass of Sangria, but the Spanish plump for a Pina Colada.

In the United States of America, the preference for each state has been revealed, with Californians and New Yorkers opting for Negronis, while the Southern states of Texas and Louisiana are searching for Daiquiris the most. 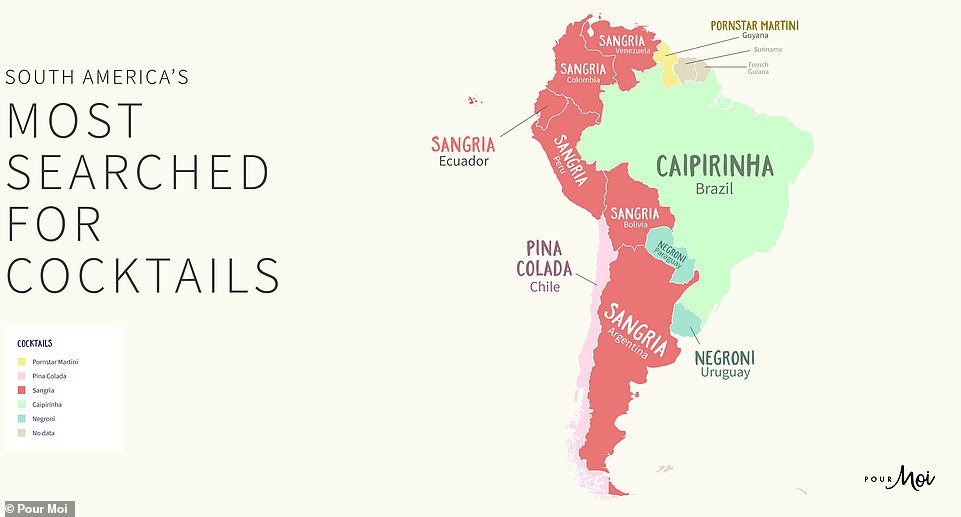 Sangria takes the lead in South America, claiming number one in the likes of Colombia and Peru 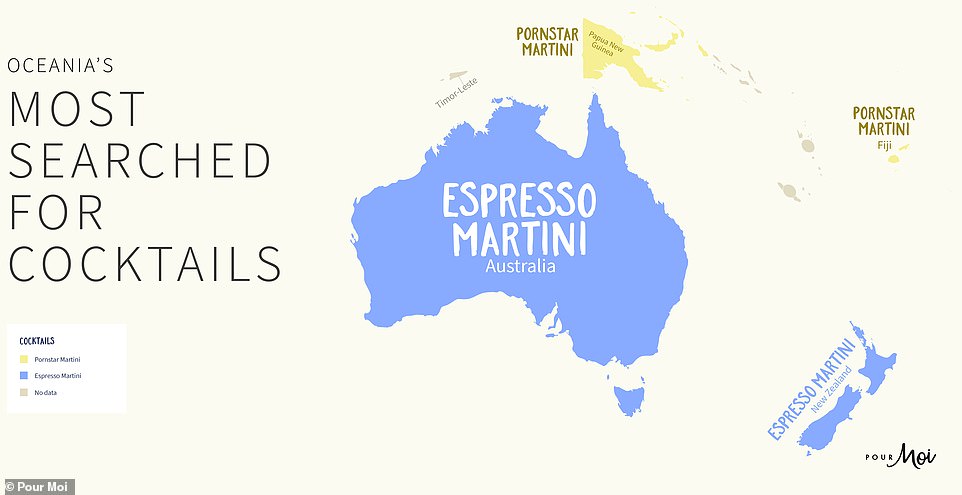 Travelling down the map to South America, Sangria takes the lead, bagging number one in the likes of Colombia and Peru, while Chileans crave a Pina Colada. 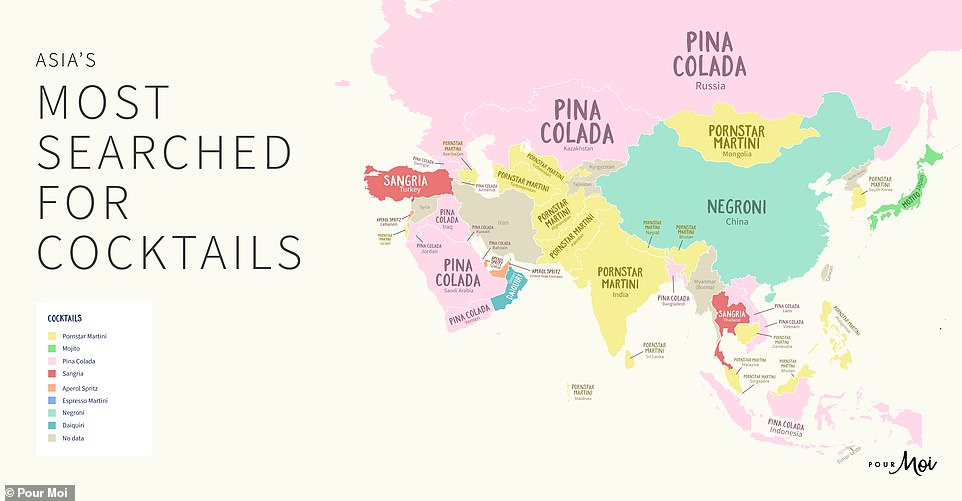 Pina Coladas are popular in Russia and Vietnam, whereas the Chinese favour Negronis 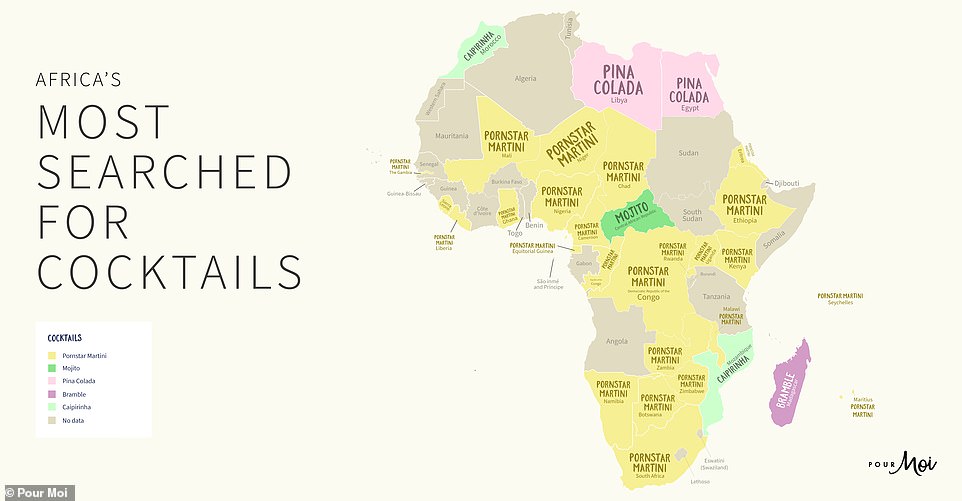 Reflecting on the data, Pour Moi founder Michael said: ‘For us Britons, this summer may be more about garden and park cocktails rather than poolside sips abroad – but that doesn’t make creating your favourite summer tipple any less enjoyable.

‘We were curious to discover the world’s most popular drinks – from mouth-watering martinis to scrummy spritzes – and turned to Google search data to find out what cocktails the world is most obsessed with.’