The AA reveals its 2022 restaurant rosette winners, from an eatery in a Scottish distillery to a fine-dining offering in a Devon Tudor mansion

If you’re in the market for a mouthwatering fine-dining experience then look no further.

The AA has released its 2022 Rosette Award winners, accolades that are handed out to restaurants that demonstrate culinary excellence. These are the restaurants that have been awarded rosettes for the first time, or have achieved a higher number than in previous years.

Simon Numphud, Managing Director at AA Media, said: ‘We are delighted to recognise those restaurants that are achieving the highest levels of gastronomic excellence in our country. Congratulations to all those working at these establishments, who continue to show the breadth and quality of the British culinary landscape.’ From a lochside spot that serves imaginative modern Scottish dishes to a thatched Oxfordshire pub that plates up fresh vegetables from its garden, scroll down for more on this year’s rosette-scooping eateries… Acleaf, pictured, is housed in a Tudor mansion that was once given to the Earl of Southampton by Henry VIII 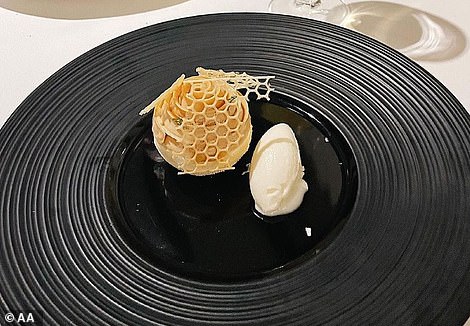 Leaping from three rosettes to four is Devon’s Acleaf at Boringdon Hall, housed in a Tudor mansion that was once given to the Earl of Southampton by Henry VIII.

According to the AA, it’s ‘the ultimate fine dining restaurant’ with aged beams, period features and tables that look out on the Great Hall.

‘The seasonally led menus showcase the stylishly inventive British cuisine,’ the judges reveal – diners can look forward to a starter of sole, veloute and fermented grape, or a main of ‘comfortable and moreish’ pheasant, bacon and truffle. 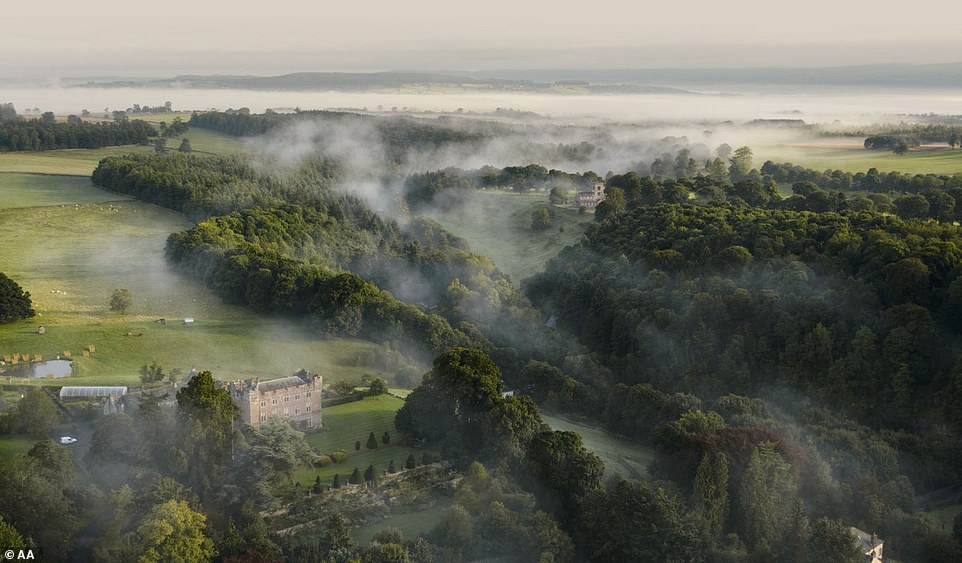 Askham Hall, pictured to the left in the foreground, ‘has a real feeling of authenticity and heritage’, the AA reveals 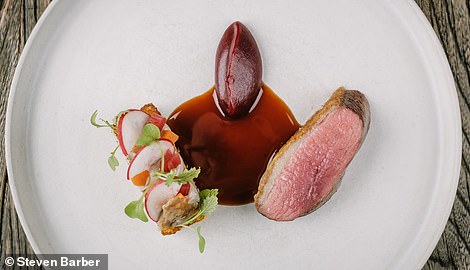 Allium at Askham Hall formerly had three rosettes, but now it’s been bestowed a coveted fourth.

Its setting, Askham Hall, has been owned by the same family since the 1830s and ‘has a real feeling of authenticity and heritage’, the AA reveals.

With the likes of Lincolnshire smoked eel, roasted Skrei cod and ‘intensely chocolatey ganache’ on offer, the modern British menu ‘changes daily, depending on what’s available from the kitchen garden and farms on the estate’. 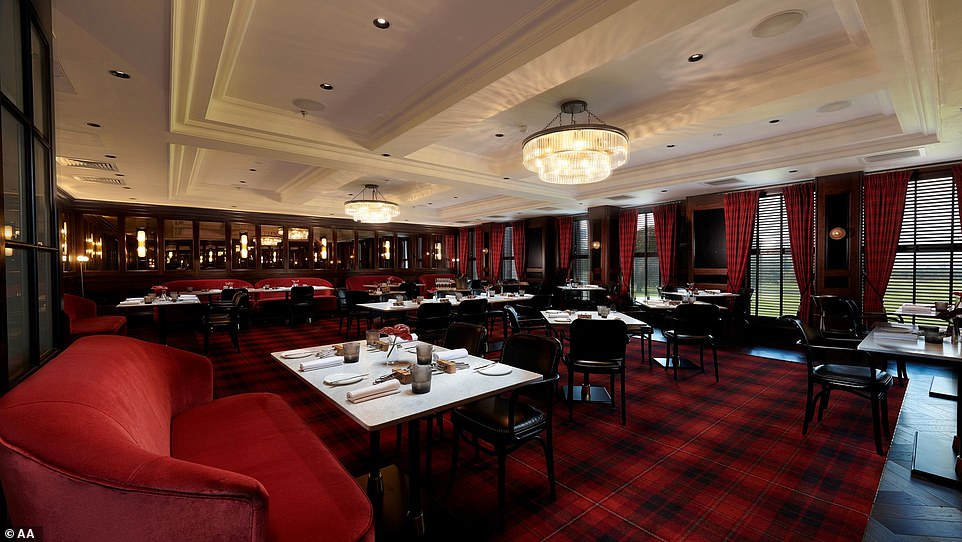 Tamburrini & Wishart, pictured, only opened to diners last September – and has already impressed the AA enough to earn an impressive three rosettes 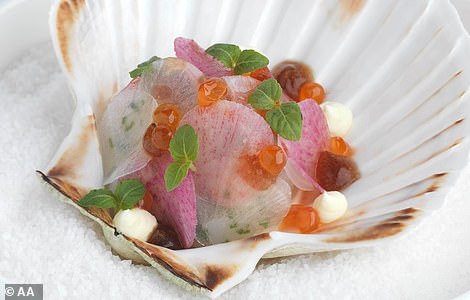 A brand-new addition to the list of rosette-winning eateries, Tamburrini & Wishart – which is on the banks of Loch Lomond inside luxury hotel Cameron House – only opened to diners last September.

The AA’s verdict? ‘Enter the elegant wood-panelled dining room at Cameron House and the expectation of what [chefs] Paul Tamburrini and Martin Wishart may bring is almost palpable.

‘The thought and imagination put into the food served here is first class as is the quality of the provenance.’

According to the judges, the dishes are modern Scottish with influences from Paul’s motherland of Italy, showcasing a wealth of flavours and technical skills.

Mains include a ‘perfectly timed’ Aberdeenshire lamb complemented with barbecued aubergine, black curry and yoghurt, while the wine list is ‘very detailed’. 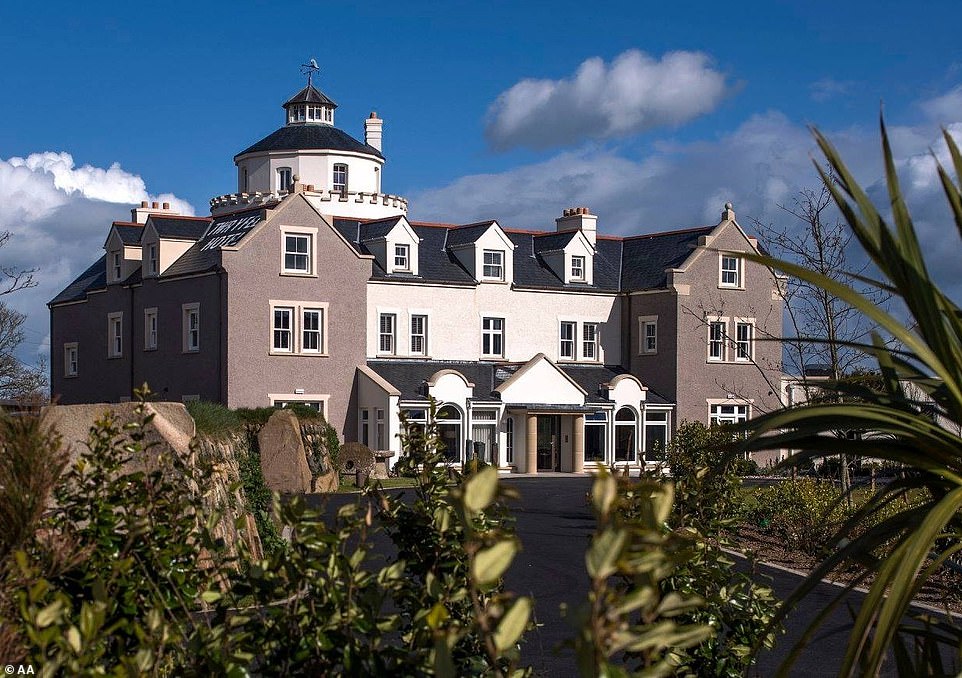 According to the judges, lovers of modern British cooking will swoon over Blas Restaurant (pictured) 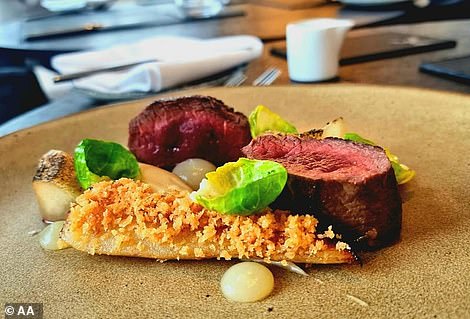 One of the meat dishes at Blas Restaurant, which serves up locally farmed beef, lamb and duck

Soaring from two rosettes to three is Blas Restaurant, which is part of Twr y Felin Hotel, occupying a converted windmill down a narrow lane close to the sea.

According to the judges, lovers of modern British cooking will swoon over the eatery.

‘Expect a wide choice of fish and seafood, while locally farmed beef, lamb and duck, as well as foraged samphire and monk’s beard often feature,’ says the AA. It adds that you should leave room for the baked custard tart dessert. 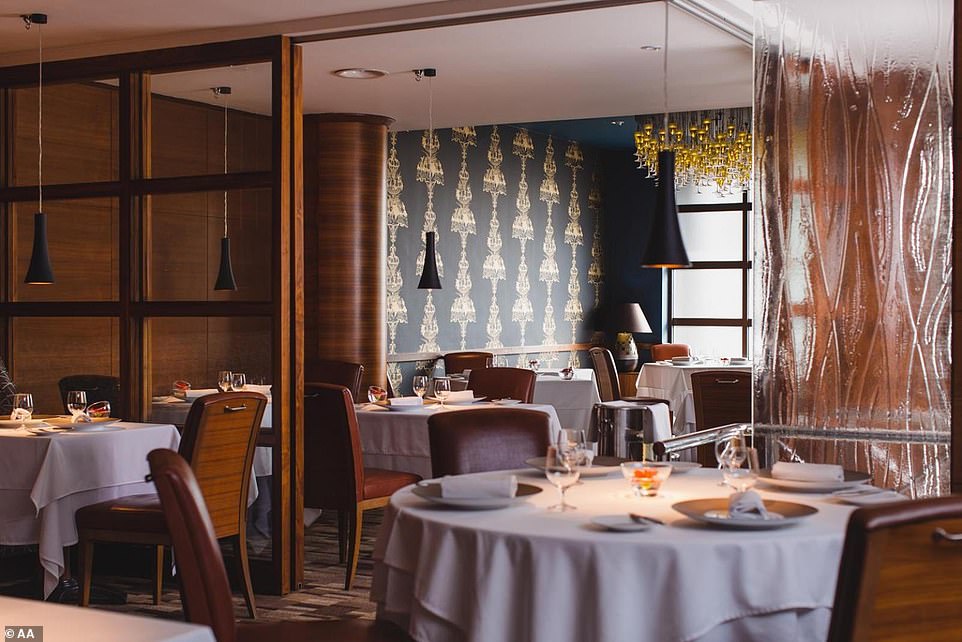 The ‘bistro-style decor’ at Bohemia, which has earned three rosettes with chef Callum Graham in the kitchen 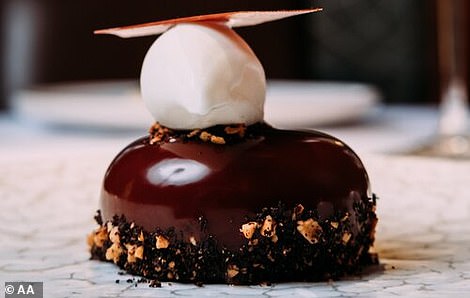 Bohemia’s AA Rosette award was previously suspended due to a change of chef – meaning it had none last year. Now, with chef Callum Graham at the helm, it has snapped up three rosettes.

Describing the restaurant, the judges say: ‘Bistro-style decor is the setting for precise and accurate cooking and presentation, using mostly French produce.’

What’s on the menu? Brittany line-caught sea bass with braised octopus and pearl barley and smoked eel risotto are among the dishes that diners can look forward to. 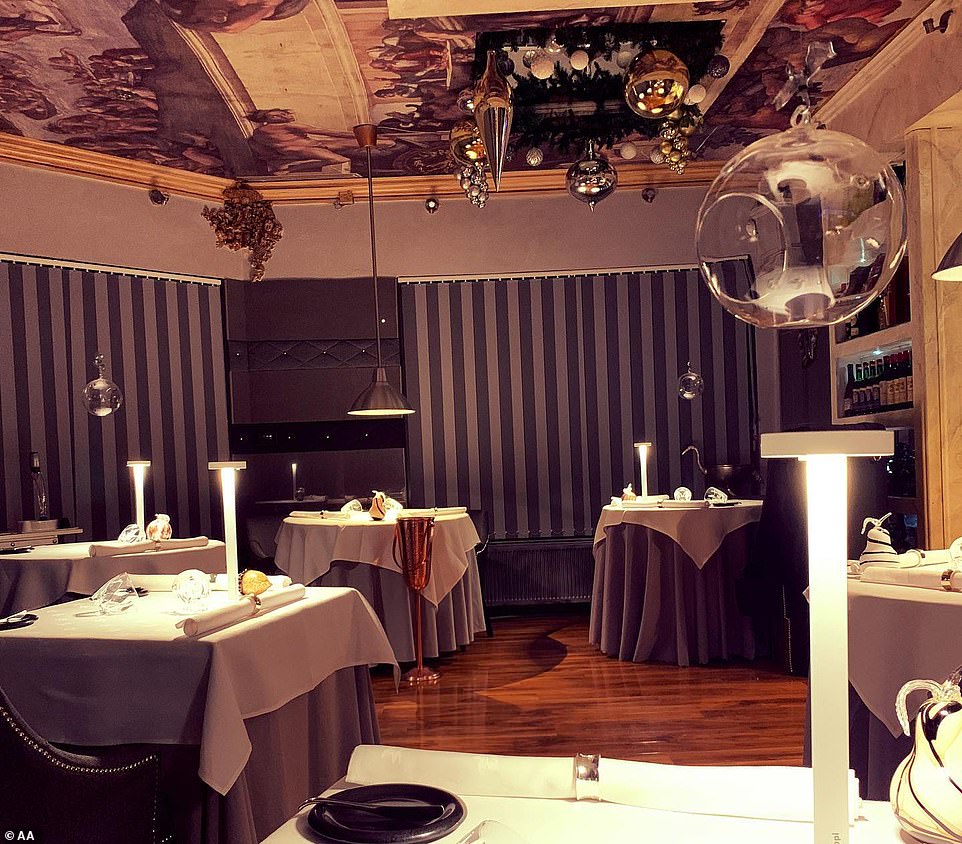 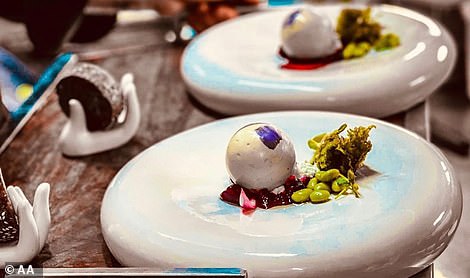 Bidding farewell to its two-rosette rating, Gem 42 impressed the judges with its ‘gleeful fusion of classical foundations and contemporary molecular techniques’.

Expect an ‘entertaining medley of textures and flavours in a number of tasting menus’ at the three-rosette eatery, with dishes such as duck and ethical foie gras parfait and dry-aged Welsh Wagyu beef sirloin.

As for the decor, the AA says that despite the building’s unassuming exterior, you ‘won’t forget the exuberant Botticelli-style ceilings and crisply dressed tables with Murano glass ornaments’. 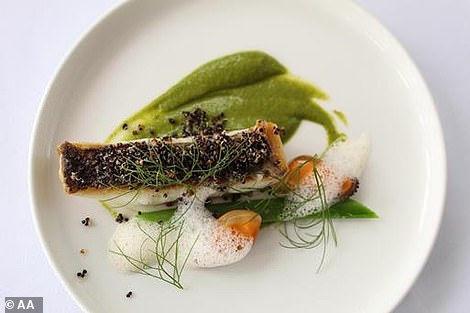 Back in 2020, Goldsborough Hall was awarded three rosettes, but the accolade was suspended last year due to a change in chef. Josh Barnes took over last September, and now it has yet again earned the prestigious three-rosette rating.

‘Canapes are served in the lounge before guests are shown through to an intimate dining space with linen-swathed tables, a baby grand, and a splendid marble fireplace,’ say the judges.

Once seated, diners can feast on modern British cooking that ‘raids the kitchen garden’, from Jerusalem artichoke tart to a ‘mosaic of foie gras and corn-fed chicken with trompette mushroom’.

The AA describes Henrock (pictured), which is set in Linthwaite House Hotel, as an ‘understated’ restaurant 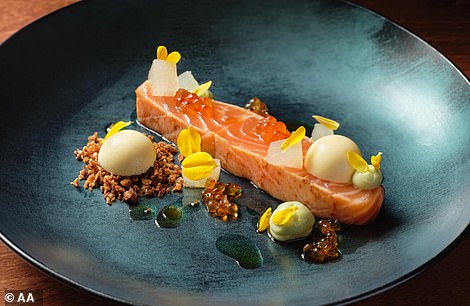 Making the ascent from two rosettes to three is Henrock, in the Lake District, which is set in the ‘stunning’ Linthwaite House Hotel and faces out on Windermere.

‘The restaurant is understated – three rooms in muted, natural tones with a few splashes of colour – very comfortable and thoroughly designed,’ says the AA.

The judges say that you can expect to sample lots of produce from chef Simon Rogan’s farm in Cartmel.

Dishes include beef tartare with light truffle and soy cream and chocolate raspberry and peanut tart with Dulcey ice cream – ‘the perfect finisher’. 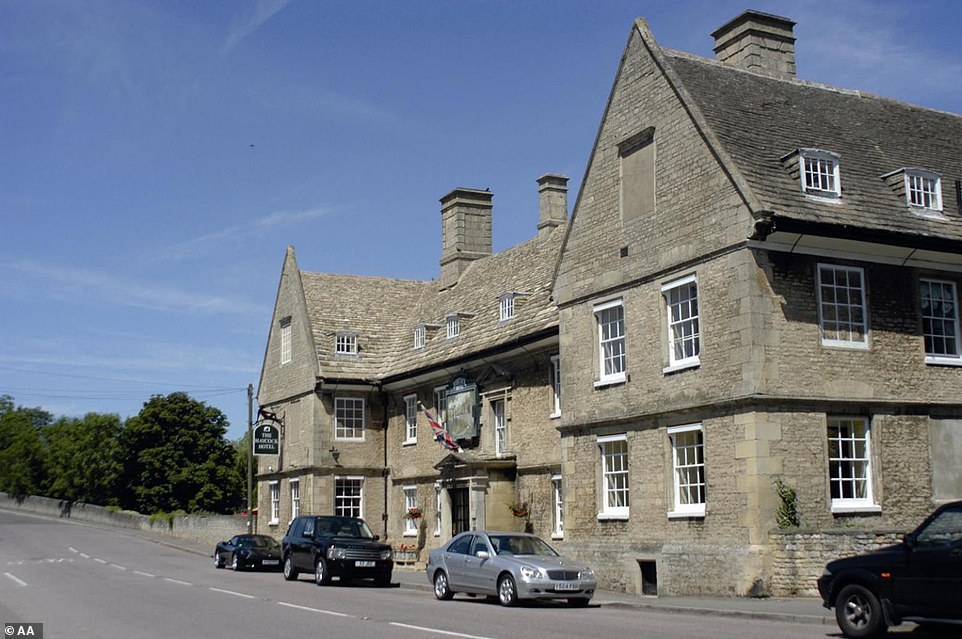 Service is ‘polished and attentive’ at Prevost at Haycock, which has moved from two rosettes to three 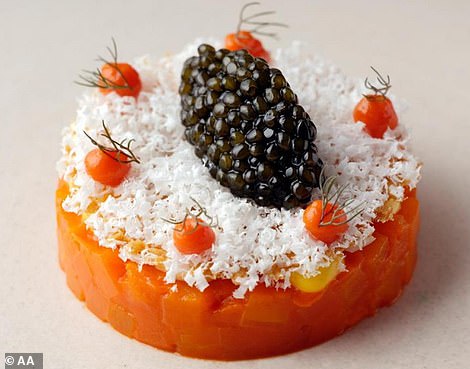 Similarly moving from two rosettes to three is Prevost at Haycock, a restaurant where ‘service is polished and attentive, and the chefs actually deliver the food to the table and explain each dish’.

The judges recommend starting with caramelised onion and croutons with a light whey topping, or tender scallop with deboned chicken wings and a cos lettuce puree, before moving on to duck with blackberries, baby turnip and steamed brioche.

As a fun quirk, the restaurant also has two massive standing birdcages that you can sit inside, according to the AA. 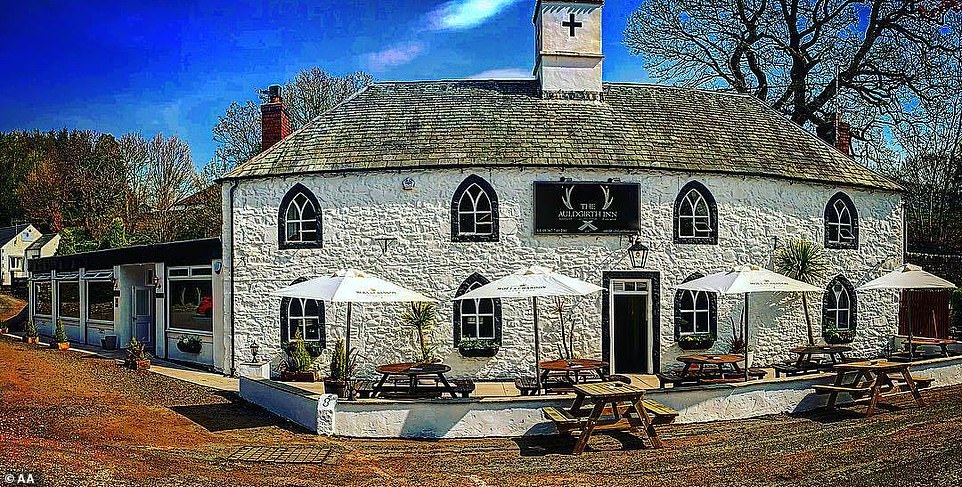 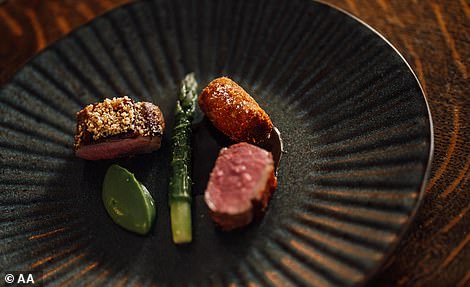 The Auldgirth Inn – trading in two rosettes for three – transforms locally sourced produce into contemporary cuisine with a classical basis, according to the AA.

It says: ‘The menu features a collection of bold and ambitious dishes, all with good balance of flavour and clarity, which is evident in the taste.’

The setting sounds just as lovely – according to the judges, the 500-year-old inn features an open plan kitchen, and large aspect windows flood the area with natural light. 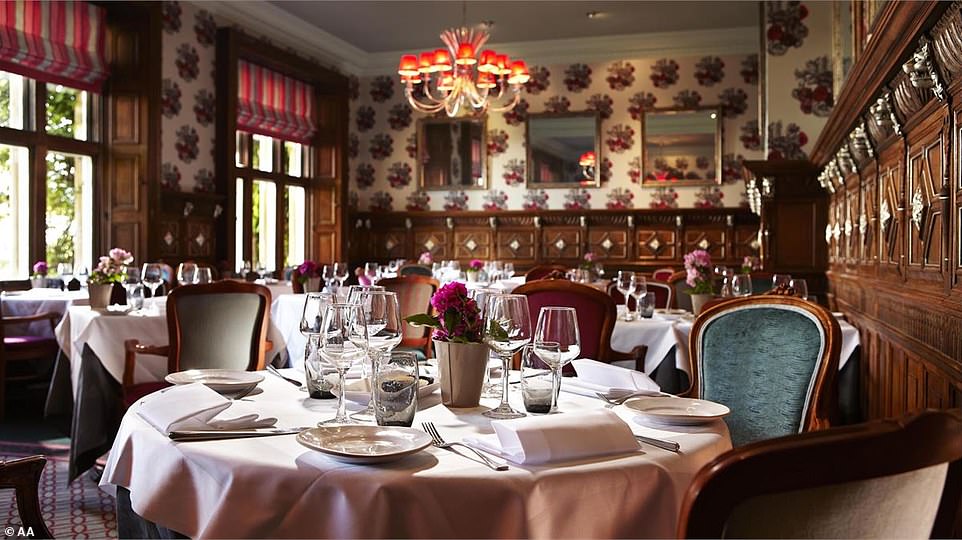 The Camellia Restaurant, pictured above, is set within a ‘handsome Victorian mansion hotel’ in West Sussex 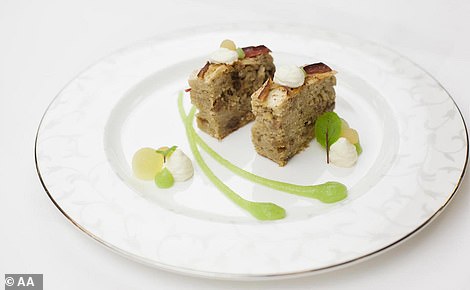 The judges decided to award The Camellia Restaurant, which is housed in a ‘handsome Victorian mansion hotel’, an extra rosette this year, taking its rating from two to three.

Visitors can look forward to ‘lovely views of the garden’ and modern British cooking with a sound foundation in the classics, according to the AA. 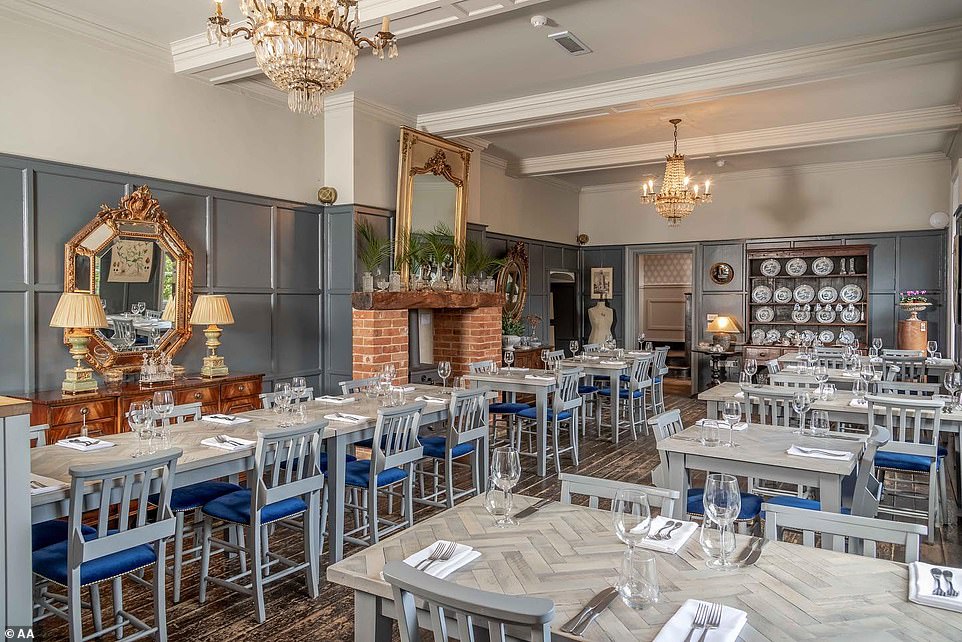 The chandelier-hung main dining room at The Dial House, where guests will encounter ‘a very relaxed and informal atmosphere, but with professional and attentive service’ 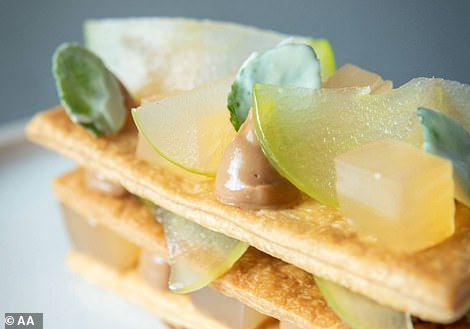 ‘Expect sparky modern cooking from a kitchen that likes to bang the drum for regional ingredients,’ says the AA of The Dial House

Bumped up from two rosettes to three is The Dial House, which occupies a ‘splendid’ Georgian building. Guests can dine in an array of rooms – the chandelier-hung main dining room, the garden room with a terrace, and the cellar with bare brick walls.

‘Expect sparky modern cooking from a kitchen that likes to bang the drum for regional ingredients,’ says the AA, adding: ‘There’s a very relaxed and informal atmosphere, but with professional and attentive service.’

The judges advise plumping for the ‘beautiful tender pork belly that almost melts in the mouth’, and that’s served with ‘flavoursome’ carrots and rhubarb. 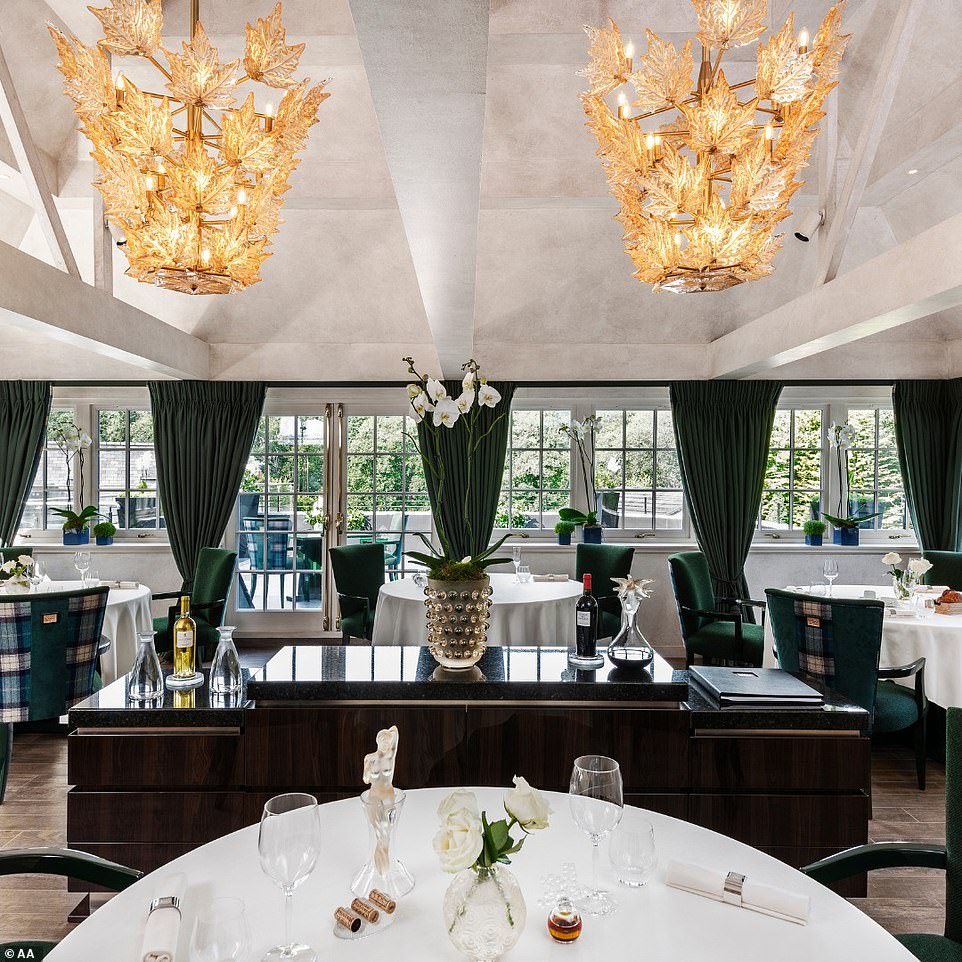 The newly opened Glenturret Lalique Restaurant (pictured) impressed the AA, earning three rosettes from the off 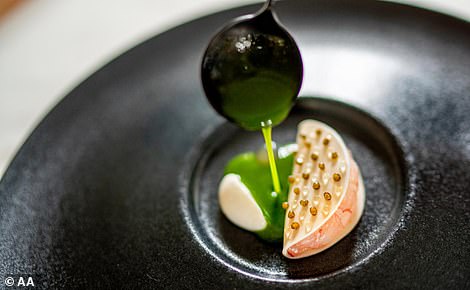 A dish at the Glenturret Lalique Restaurant, which is known for whipping up ‘highly skilled, precise, modern European cooking with a Scottish focus’

A new addition to Scotland’s restaurant scene, the Glenturret Lalique Restaurant – part of a working distillery – opened its doors last summer. In that time, it’s earned an impressive three rosettes from the AA.

The judges describe the eatery’s tableware as ‘stunning’ and the service as ‘formal, French, yet friendly’.

‘A daily-changing fixed menu displays highly skilled, precise, modern European cooking with a Scottish focus,’ says the AA, adding that you should look out for the ‘intriguing Kumquat Penicillin palate cleanser’ and ‘The Sweetie Box’ dessert on the menu. 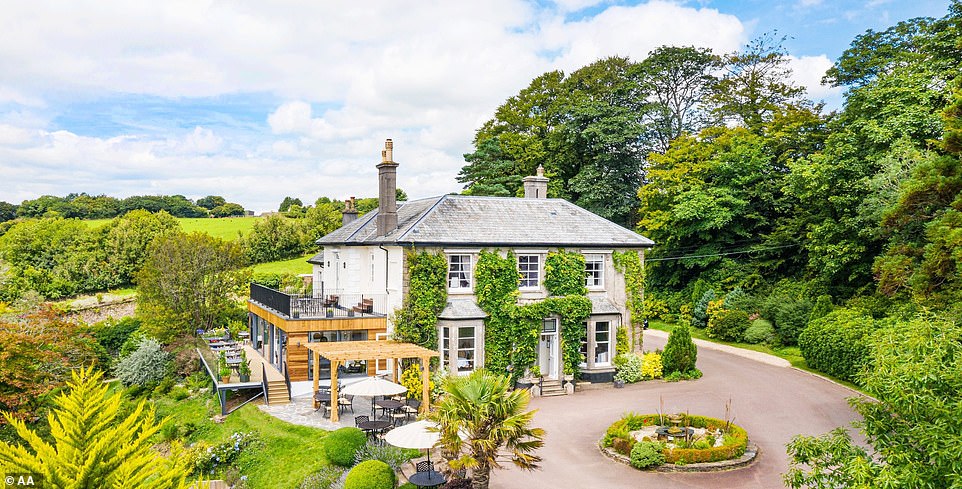 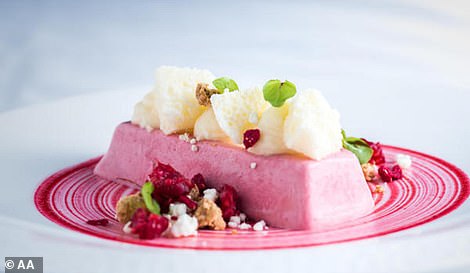 Horn of Plenty has an emphasis on ‘local and seasonal produce’

‘With stunning views over the Tamar Valley, the charming Horn of Plenty is a mid-19th-century country house hotel that once belonged to the Duke of Bedford’s mining chief,’ says the AA.

The restaurant, which has transitioned from two rosettes to three, has an emphasis on ‘local and seasonal produce’.

Watch out for the roasted venison loin, which is ‘possibly the best venison’ that the AA’s inspector has ever had – and pairs ‘perfectly’ with a glass of the Italian Zinfandel. 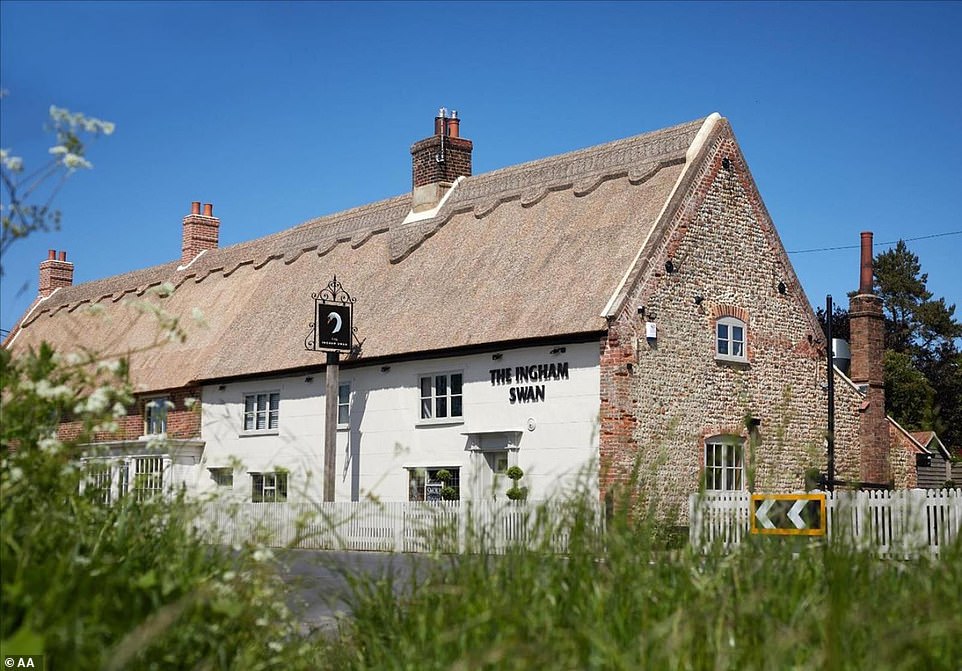 Service is ‘relaxed yet very attentive’ at the thatched Ingham Swan in Norfolk, pictured above 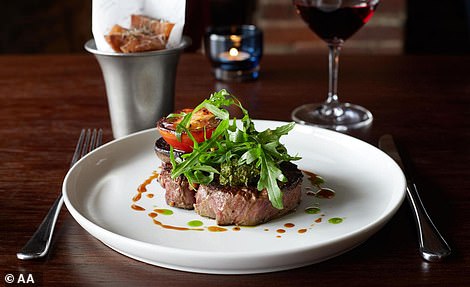 Dig in to ‘modern British dishes’ at The Ingham Swan

What’s more, service is ‘relaxed yet very attentive’ and ‘there’s a good selection of well-chosen wines available as well as a large selection by the glass’, according to the AA.

The judges add that ‘you’ll love the dining area’, which is described as a space with light wood flooring, dark wood tables, blue chairs and exposed brick walls. 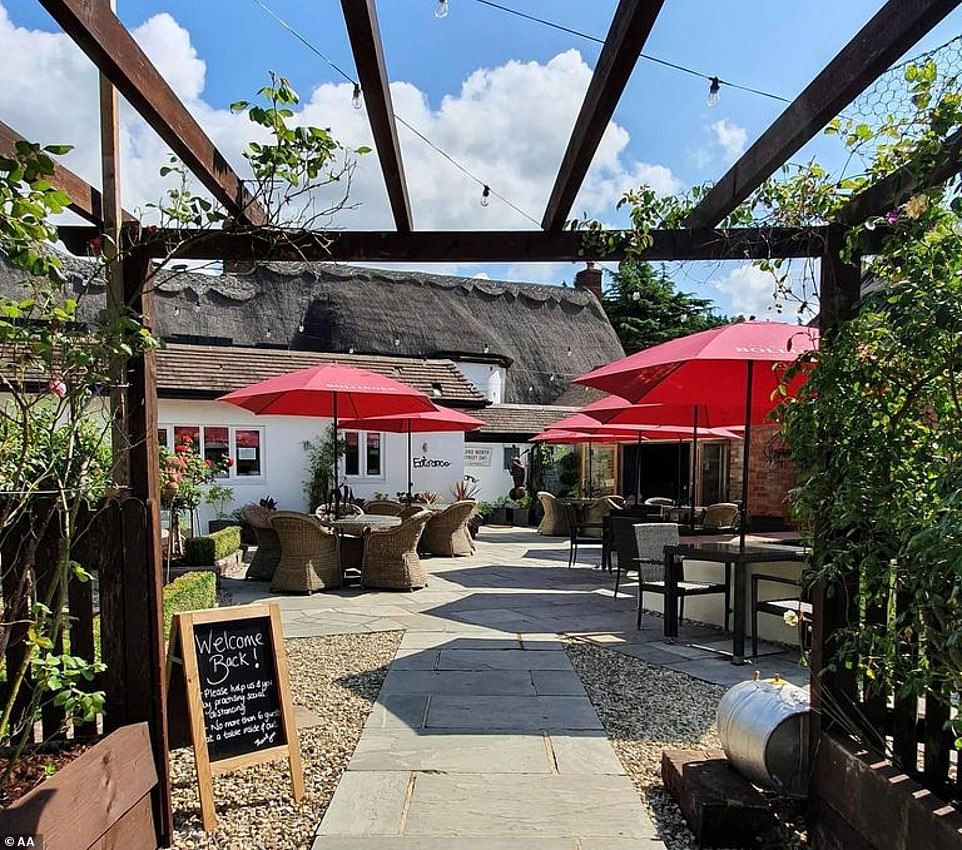 The Nut Tree Inn, pictured, is a ‘fine pub with a reputation for great food, beer and wine’, according to the AA 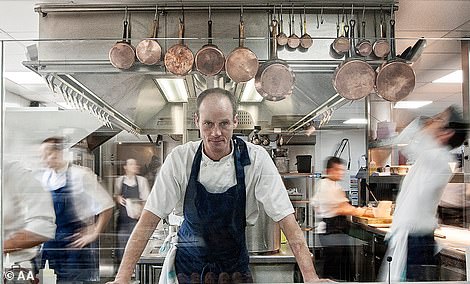 Pictured is The Nut Tree Inn’s chef-owner Mike North, who has run the acclaimed eatery for the past 15 years

Impressing the AA’s inspectors, The Nut Tree Inn – where diners are met by ‘lots of local produce, including veg from the garden’ – has ascended from two rosettes to three.

The AA notes that the thatched cottage has been home to Michael and Imogen North and their family for the past 15 years, and in this time, ‘it has become a fine pub with a reputation for great food, beer and wine’.

It says: ‘Its roots are solidly in classic cooking techniques using the best produce possible and treating the ingredients with integrity to offer balanced dishes full of flavour with a keen eye for presentation.’ On top of that, service is described as ‘friendly and upbeat’.