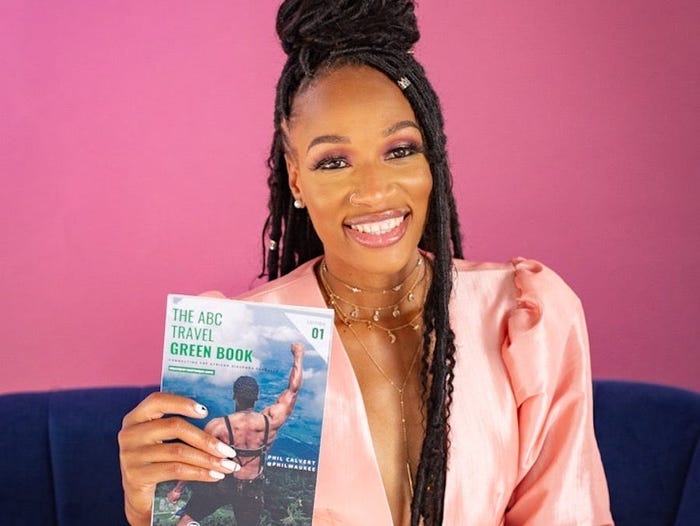 In 1936, Victor Hugo Green, a Black postal worker from New York, created "The Negro Motorist Green Book," a guide for local Black travelers to find restaurants, shops, and hotels in which they'd be free from the discrimination rampant during the Jim Crow-era. A year later, due to overwhelming demand, a national version was published.

In 2020, Martinique Lewis created a modern-day adaptation called "The ABC Travel Green Book" that lists Black-owned businesses around the world, as well as events, festivals, and tours pertaining to Black culture.

According to Lewis, 84 years after the original 'Green Book' was published, little has changed for Black travelers

"You're going to always experience anxiety [as a Black traveler] because there's always going to be racism," she told Insider, adding that it doesn't matter whether the racism is overt or not.

She explained that this is one of the things the "ABC Travel Green Book" deals with. The self-published directory outlines her own experiences in certain places, details whether there have been any hate crimes lately, and whether these places have a Black community.

An avid traveler, Lewis was sick of not seeing herself reflected in travel ads and campaigns

Lewis, now a diversity in travel consultant, worked in fashion until late 2017. Once she noticed a lack of diversity in the travel industry, however, and the fact that travel publications, tourism bureaus, and travel companies weren't doing anything to attract Black travelers, she couldn't unsee it.

She decided she wanted to help the travel industry change and that it had the financial incentive to do so. Lewis said she wanted to "make them understand how much the Black consumer, the Black traveler, spends." African Americans spent $63 billion on the US travel and tourism economy in 2018 alone, according to a report by Mandala Research — and that's just the US.

She adds that around the time she noticed the lack of representation, she also noticed Black travel communities starting to pop up online, which she said affected where Black travelers went.

"We were literally planning our travel itineraries based off of what we saw on social media," she said.

She decided to hold companies accountable

She quit her job and used her savings to preach the importance of diversity and inclusion at various conferences around the world, beseeching companies to do more for travelers of color.

Frustrated by a lack of action, she started making report cards for the industry, giving well-known travel brands letter grades for their diversity and inclusion efforts across various metrics. This garnered some buzz, she said, and brands started hiring her to do internal training and influencer trips.

She first heard about the original "Green Book" while working at Nomadness Travel Tribe, which Lewis describes as "as the oldest Black travel movement in America."

"I kept thinking, god, I have to do something like this. Because as a traveler, I was finding these communities of Black people in places that you would have never thought they would be," she said, adding that she wanted to share these unique experiences she was having with others.

Amsterdam is what really got her into the idea of creating a modern-day version, as she said she was surprised to find the Dutch city home to a huge Black community.

"It's all just Black history, there are all these Black restaurants, there's a Black hospital, there are Black cafés. There's a group dedicated to Black women who come to Amsterdam," she said.

The book took her almost two years to write

"Researching it was rigorous," she said of the nearly two years it took her to put the book together. "These are things you can't find on Google, you can't find on Yelp. There's no way to identify what the Black-owned businesses are if you don't know word-of-mouth or you haven't been there yourself."

Close to giving up, she credits Blackout Tuesday on June 2, when people posted Black squares on their social media feeds to protest racism and police brutality, with re-energizing her to finish the book.

She said that companies started reaching out to her wanting to talk about diversity, and while the timing annoyed her ("Now, all of a sudden, you want to talk about Black-owned businesses?") she said she felt that the book could be a resource for allies as well.

"What I was trying to do with the Green Book is help people with their itinerary to be able to patronize Black-owned businesses, to be able to support and celebrate Black culture in places where they didn't think it would normally be," Lewis said. "I want people, if they have a love for travel, to take this book and explore these communities, so they learn something new."

She credits her frustration with brands she claimed have rarely worked with Black people, addressed Black people, or really depicted Black people in any significant way who were suddenly advertising Black Lives Matter after Blackout Tuesday with the impetus behind the Black Travel Alliance, which she founded a week later.

"It is not OK for our trauma to be your trend in this moment," she said.

According to Lewis, the alliance aims to show the industry "You have to do better and there's somebody here now who's going to hold you accountable for who you said that you are." Amplification, alliance, and accountability are listed as the pillars of the alliance's community on its website.

She said it also provides resources for members and helps with job placement ("building up African-American leaders in the tourism space"), works with brands on diversity and inclusivity, and is working on research projects that take an in-depth look at the Black travel community, emerging trends within it, and how much money Black travelers spend worldwide — a first of its kind, according to Lewis.

Her hope for the future is for diversity to no longer be an afterthought, but for it to be top of mind for brands

"I want people to say it and mean it, I don't want people to just do it because it's trending," she said. "I would like to see brands just do better."

Lewis believes that the pandemic has shed light on the inequalities of travel and is hopeful for its future. She predicts that post-pandemic, when destinations launch recovery campaigns, these will be a lot more inclusive and diverse than ever before as a result.

"I think now people just have better knowledge and are willing to move forward in making sure that everybody is a part of [travel]. So I'm excited to see it actually," she said.