The first thing a visitor to Suerte might notice after opening the menu is a section cheekily titled “Vitamin T” — a collection of the restaurant’s takes on a variety of regional Mexican classics: tacos, tostadas, tamales, tlacoyos. But those dishes have something in common that could have resulted in a “Vitamin M” section: masa, the corn-based dough that is their central focus and, indeed, the restaurant’s.

The mission of Suerte, which opened in March in East Austin, said Fermín Núñez, its 30-year-old executive chef, is “creating this beautiful thing called masa, which is the canvas for so much Mexican cooking.” The masa is made in-house, using corn sourced from two local producers: red corn from Richardson Farms, and heirloom white and green from Barton Springs Mill. “Every night and into the next morning,” Mr. Núñez said, “we make masa.”

On a summer visit to Suerte, the various iterations of masa were indeed delicious, both earthy and sweet. Carnitas tlacoyo, shaped like elongated footballs, were pleasantly soft and refried beans and salsa verde added extra character. Less successful was the quesadilla del tule, a taste-muddle of squash, Oaxacan cheese, peppers and a pumpkin seed and pistachio salsa. But the star of the T dishes was the suadero tacos, packed with meltingly soft confit brisket, an avocado salsa cruda and something the menu calls “black magic oil” (actually a combination of morita chile, fermented black beans, black sesame seeds and oil).

It is also worth venturing beyond the Vitamin T section. From “Frio & Raw,” we tried the bright and spicy aguachile, with royal red prawns in a cascadel chile broth, topped with a dark, crunchy cracker (made from masa, of course). Out of “Specialties” we sampled a wildly flavorful barbacoa of goat ribs, served with two types of salsa, housemade queso fresco and a basket of tender tortillas. And the “Vegetables” section yielded a perfect stand-in for dessert: peaches and mangos, which arrived prettily dressed in a Latin spin on green goddess dressing.

Mr. Núñez comes to the imaginative Mexican spot with extensive bona fides. He grew up traveling back and forth between Torreón, in north-central Mexico, and various locales in Texas. After settling in Austin, he worked at acclaimed restaurants like La Condesa, Uchiko and Launderette before opening Suerte with the restaurant’s owner, Sam Hellman-Mass, 33.

The chef is quick to note that his focus isn’t just masa, but creative uses of local ingredients, always with an emphasis on Mexican technique. His approach, he said, is to capture that seemingly simple — but actually sophisticated — Mexican expertise with local, seasonal ingredients.

That dedication carries over into the spirits and cocktail lists; the latter includes ingredients like Oaxacan whiskey and rum, ancho verde and tamarindo; try the mezcal-based Rosalinda. The spirits list is loaded up with dozens of mezcals and tequilas (available in one-ounce pours for easier sampling), as well as less common agave-derived spirits like sotol, raicilla and bacanora. We tried a few, which, arrived delightfully labeled to make them easier to identify. 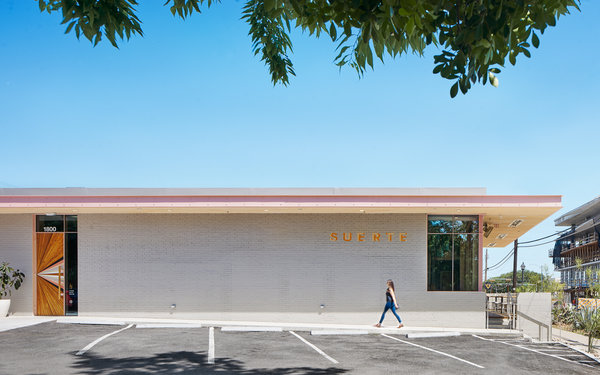 All of this is enjoyed in a light, airy space full of blonde wood and decorative items created by artisans from Mexico and Texas.

So why Suerte, which means luck? “The name came from my early days, at a previous restaurant,” said Mr. Hellman-Mass, a former chef. “All the cooks would bump fists and say ‘suerte’ — as in, have a good service.”

It feels about right for diners at the new restaurant, too: Not everything will be a winner, but with a little bit of suerte, you’ll have an enjoyable meal.