But in less than a year, another type of internet tracking has started taking over. And it is having the unintended effect of reinforcing the power of some of tech’s biggest titans. 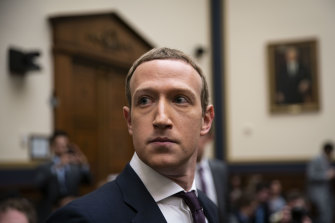 Mark Zuckerberg, the CEO of Facebook’s parent company Meta, has said his company expects to benefit from the tracking changes in the long run.Credit:Bloomberg

The shift suggests that gathering people’s online data for targeted advertising is not going away. That has implications for how companies make money online and how the internet operates. It also underlines the advantages built up by some of the largest digital platforms.

“They’ve entrenched their own power,” Eric Seufert, a media strategist and the author of Mobile Dev Memo, a blog about mobile advertising, said of Apple and Google.

For years, digital businesses relied on what is known as “third-party” tracking. Companies such as Facebook and Google deployed technology to trail people everywhere they went online. If someone scrolled through Instagram and then browsed an online shoe store, marketers could use that information to target footwear ads to that person and reap a sale.

But that kind of invasive tracking is being scaled back or blocked by Apple and Google to protect people’s privacy. Last April, Apple introduced a feature so iPhones users could choose not to be followed by different apps. Google also announced a plan to disable the tracking tech in its Chrome web browser by 2023 and said it was working to limit data sharing on Android phones.

Now tracking has shifted to what is known as “first-party” tracking. With this method, people are not being trailed from app to app or site to site. But companies are still gathering information on what people are doing on their specific site or app, with users’ consent. This kind of tracking, which companies have practiced for years, is growing.

In other words, Google is accumulating data on its own users’ search queries, location data and contact information. Pinterest is doing the same with its users on its site and app, while TikTok is gathering information on the people who are on its app.

The rise of this tracking has implications for digital advertising, which has depended on user data to know where to aim promotions. It tilts the playing field toward large digital ecosystems such as Google, Snap, TikTok, Amazon and Pinterest, which have millions of their own users and have amassed information on them. Smaller brands have to turn to those platforms if they want to advertise to find new customers.

Many small businesses already appear to be spending less on digital ads that rely on third-party data, such as Facebook and Instagram ads, and are reallocating marketing budgets to platforms with lots of first-party information, such as Google and Amazon.

“Anybody who is in their right mind and wants to reach a large audience still has to go to them,” Douglas C. Schmidt, a computer science professor at Vanderbilt University who researches digital privacy, said of the big tech sites.

Consider Stoggles, a company in Pasadena, California, that sells fashionable protective eyewear online. The firm, which spends about $US250,000 ($333,000) a month on online advertising, has long earmarked roughly 80 per cent of its marketing budget to buying Facebook and Instagram ads to identify new customers, said Max Greenberg, one of the founders of Stoggles.

But after Apple made its privacy changes, Stoggles trimmed its spending on Facebook and Instagram ads to 60 per cent of its budget, Greenberg said. The company instead bought more Google search ads, Amazon ads to reach shoppers and ads on TikTok to appeal to young people.

“The days of supercheap and very targeted online marketing are over,” Greenberg said. “We need to experiment with other platforms.”

Some tech companies said they did not consider the monitoring, collecting and storing of data on their own users to be tracking. Gathering such first-party information, they said, is the digital equivalent of a supermarket’s keeping tabs on customers in its store and using that data to persuade businesses to advertise or offer coupons. 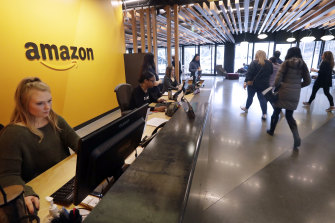 Amazon disclosed the size of its advertising business — $US31.2 billion in revenue in 2021 — for the first time. That makes advertising its third-largest source of sales after e-commerce and cloud computing.Credit:AP

Google and Apple said the shift was not a way to strengthen their own standings. Apple said it had to follow the same rules as everyone else. Google said it had pledged to regulators that it would not adopt privacy measures that gave itself an edge. It also said it was working on software to help advertisers and website publishers that did not have access to first-party data.

Theoretically, Facebook and Instagram would also benefit because they have plenty of first-party data. But their parent company, Meta, has had trouble navigating the transition. In February, the company said it expected to lose $US10 billion in sales this year because of Apple’s privacy measures.

To adapt, Meta has hired hundreds of engineers to work on new ad-targeting systems that do not rely on following people across the internet. It has also asked small businesses to share information about their customers with it to improve the performance of its ads.

In a statement, Meta said that the effort was not a way to evade Apple’s privacy rules and that advertisers must get permission from their users to share data with it. It added that it had created the program before Apple’s changes and that Google and Snap did similar things. Mark Zuckerberg, Meta’s CEO, has said his company expects to benefit from the tracking changes in the long run.

While Meta adjusts, some small businesses have begun seeking other avenues for ads. Shawn Baker, the owner of Baker SoftWash, an exterior cleaning company in Mooresville, North Carolina, said it previously took about $US6 of Facebook ads to identify a new customer. Now it costs $US27 because the ads do not find the right people, he said.

Baker has started spending $US200 a month to advertise through Google’s marketing program for local businesses, which surfaces his website when people who live in the area search for cleaners. To compensate for those higher marketing costs, he has raised his prices 7 per cent.

“You’re spending more money now than what you had to spend before to do the same things,” he said.

Other tech giants with first-party information are capitalising on the change. Amazon, for example, has reams of data on its customers, including what they buy, where they reside, and what movies or TV shows they stream.

In February, Amazon disclosed the size of its advertising business — $US31.2 billion in revenue in 2021 — for the first time. That makes advertising its third-largest source of sales after e-commerce and cloud computing. Amazon declined to comment.