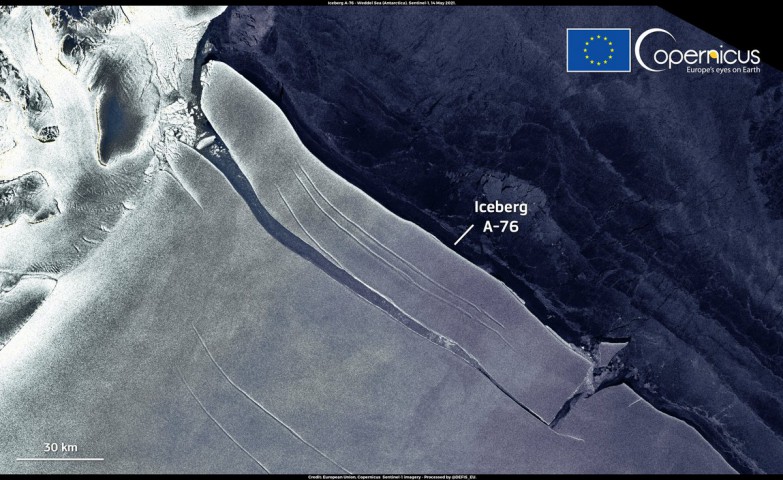 The world’s largest iceberg appears to have broken off the Antarctic ice shelf.

The 1,667 square mile slab of ice, slightly larger than the island of Majorca, broke away from the Ronne Ice Shelf in a process known as ‘calving’.

It’s currently floating in the Weddell Sea, in Western Antarctica, and was first spotted by the European Space Agency’s (ESA) Copernicus Sentinel-1 satellite.

The splitting of this particular iceberg, which is 105 miles long by 15 miles wide, was an expected event, according to experts from the British Antarctic Survey.

It’s not thought to be linked to climate change and is instead a natural process.

Dubbed A-76 by scientists, it’s the largest iceberg currently known to be floating, taking the top spot from iceberg A-23A, which also floats in the Weddell Sea – but is a puny 1,498 square miles in comparison.

Confirming the existence of A-76 required an international, multi-disciplinary effort, with the British Antarctic Survey first noticing it had broken off – later being confirmed by the US National Ice Center using ESA’s satellite images.

ESA’s Sentinel-1 satellites orbit the Earth’s poles and use radar, meaning they can observe remote regions like Antarctica in day or night.

Icebergs like A-76 tend to break up over a period of months, which is why the ‘world’s largest’ iceberg doesn’t tend to hold onto that title very long.

Earlier this year, iceberg A-68, named for the quadrant of the Antarctic it was initially sighted in, broke apart from its 2,239 square mile mass into constituent smaller ice fragments.

While the calving of A-76 was expected by researchers, there is concern that more frequent calving events could be accelerated by climate change.

Melting of Antarctica ice sheets has been modelled to raise global sea levels by 2.5 metres over the century, at the current rate of melting.

Laura Gerrish, of the British Antarctic Survey, said the A-76 iceberg was ‘part of natural cycles on ice shelves that hadn’t calved anything big for decades.’

While Gerrish admitted it’s ‘important to monitor the frequency of all iceberg calving,’ because of the possibility of climate affected calving, she said that ‘these are all expected for now.’

Antarctica holds almost 70% of the planet’s fresh water – if global warming were to accelerate, the ensuing melting would have catastrophic effects on the world’s sea levels.

The majority of that water is locked up in three massive ice sheets that span the continent.

Even a small proportion of these ice sheets melting could have catastrophic effects on the world’s climate.