Samsung might have grabbed all the headlines when it showed its bendable smartphone on stage for the first time to the public late last year, but a small Chinese startup has beaten the South Korean tech giant to market.

Meet FlexPai from Royole, the world's first truly foldable smartphone, which you can buy right now for $US1318 ($1850) directly from the company's website. 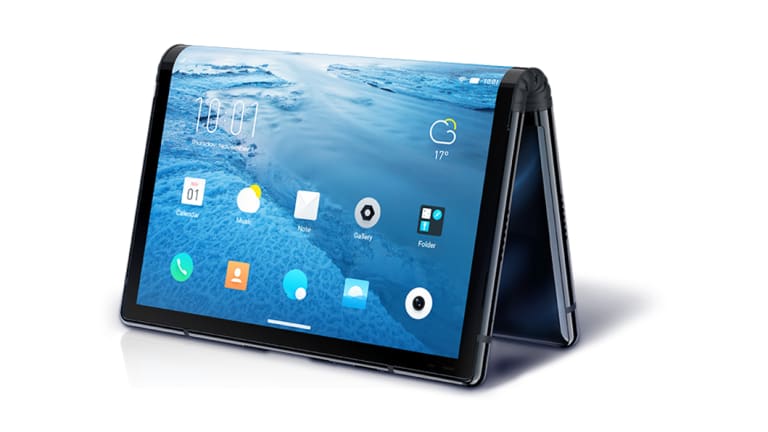 The FlexPai can be used as a two-sided phone, a full tablet or standing like a tent.

I spent some hands on time with the device at the annual Consumer Electronics Show in Las Vegas this week, and it was both brilliant and heartbreaking at the same time.

FlexPai is a 7.8-inch tablet that — with its flexible display — can bend around a 180 degree hinge to turn into a smartphone. In smartphone mode you get two 4-inch displays with an option to turn one side off to save power. There's a reassuring snap when you fold it, and the screen makes a fairly seamless transition when switching modes.

Royole says that the device can be bent more than 200,000 times before the screen starts showing signs of wear, which is equivalent to more than100 folds every day for five years. The screen itself also uses no glass, reducing the chances of it breaking or being easily scratched. 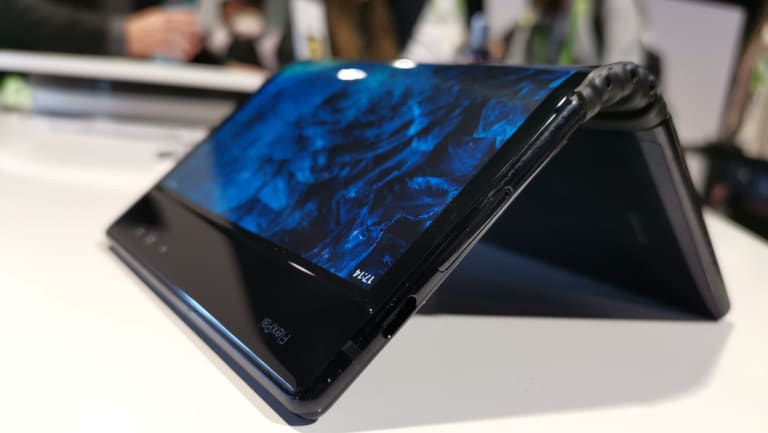 The rubber hinge isn’t the prettiest, but it works.Credit:Krishan Sharma

Other than the ability to use the device as a tablet in its unfurled state and a smartphone when in it's fully bent, Royole has added some extra functionality that takes advantage of its hybrid form factor.

Firstly the phone has a dual SIM card tray so you can dedicate a SIM for each side of the handset. Or you can prop up the phone in a tent style mode for multiplayer gaming, where one player can use one side of the screen and play against a friend staring at the other. It's a great idea, but Royole is going to need developers to actually make games that take advantage of it.

The feature that may be most appreciated here is the ability to use the main camera facing forwards or backwards. If you're taking a photo of someone else, both you and the subject can see the shot before it's taken, with the camera's viewfinder displaying on the back screen and on the front at the same time. There's an option to also disable the viewfinder on the back if you prefer.

When folded, there's a notification bar that appears alongside the hinge so you can watch videos without interruption on the main screen as incoming messages and emails are displayed on the edge. 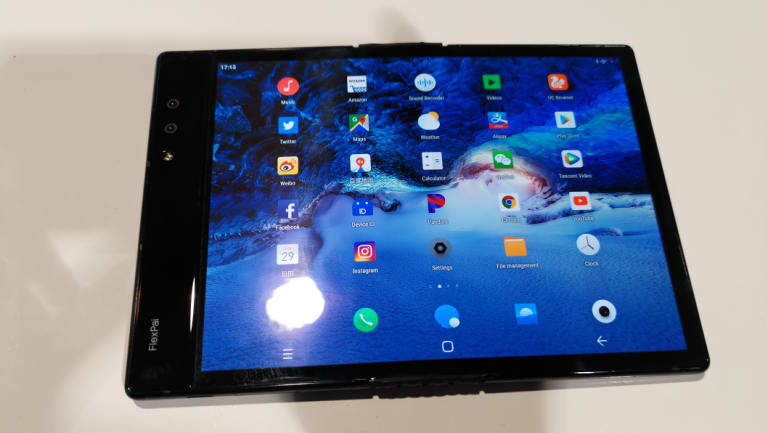 As a tablet the FlexPai is a decent size, but it isn’t perfectly flat.Credit:Krishan Sharma

The screen itself is a 1920 x 1440 resolution AMOLED display, and the bendable panel was developed entirely in-house. Royole invested over $US1 billion dollars in a factory in Shenzhen to manufacture its bendable screens, which can also be used on other items such as handbags, hats and shirts.

On the inside it's running the latest flagship Qualcomm Snapdragon 855 processor, with 6GB of RAM for the 128GB model and 8GB of RAM on the 256GB variant. There's a fingerprint scanner, USB-C port and it runs its Water OS on top of Android 9 Pie.

Google hasn't yet updated Android to take advantage of bendable smartphones so Royole had to make some custom software for the content on the screen to seamlessly spill across both screens when fully opened. But this also involves getting things like palm rejection right so you don't accidentally trigger apps or other unwanted taps when folding the screen, and this is where the experience falls over.

Regardless of whether I was folding the screen to use as a smartphone or unfurling it to use the device in tablet mode, I managed to launch apps that I had no intention of launching. Make no mistake, the FlexPai will make even the most tech savvy users look clumsy. There's also a noticeable delay as the screen catches up to the physical form factor it's being stretched into.

The other issue is that when fully open in tablet mode, the middle where the hinge rests underneath isn't completely flat, which is a noticeable issue when using it as a tablet.

At 320g the FlexPai is also on the hefty side and, although it is likely to fit in your pocket, it's bulky in its folded state thanks to the thick hinge which is adorned in a rather garish rubber material.

I wanted to love the FlexPai, I really did. Smartphones have become stale and the market has become a duopoly. Here we have a David and Goliath story of a small startup releasing a truly groundbreaking product that has the potential to revolutionise the way we use smartphones and tablets.

But the reality is that, while the hardware largely delivers on the promise, the software to take advantage of that unique hardware simply isn't up to the task.