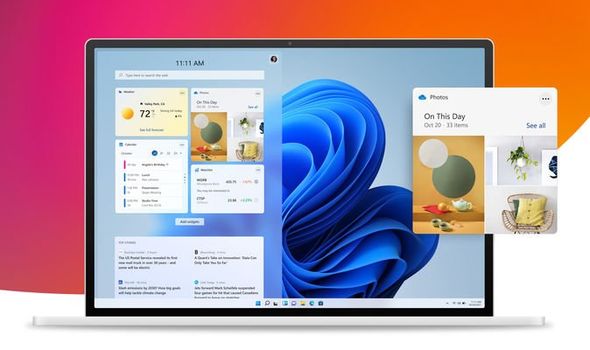 Windows 11 will be available from October 5, 2021, Microsoft has confirmed in a blog post. Starting from early October, some PC owners with an official copy of Windows 10 will be able to upgrade to the redesigned operating system completely free of charge. Microsoft offered a similar free upgrade at the launch of Windows 10 to try to boost adoption. Brand-new laptops, desktop PCs and two-in-one tablets with Windows 11 preinstalled will also begin to hit store shelves worldwide from October 5, Microsoft added.

Windows 11 is set to bring a dramatic new look to your PC. The new operating system, developed under the watchful eye of executive Panos Panay – who oversees the Surface hardware division inside Microsoft, brings an almost unrecognisable Start Menu, rounded edges to all windows, six preinstalled themes to customise the look, and a new panel of interactive widgets that can be accessed at any time. During the launch event back in June, some of these changes were lauded by fans… while others have caused anger.

To find out whether your current machine is capable of running Windows 11 (not every device with Windows 10 can upgrade to the next version), Microsoft has updated its Windows Update app. This will now scan the components in your PC and let you know if your system is eligible for the upgrade. You can check now by heading to Settings > Windows Update > Check Updates to see if your device is ready for the new OS.

Even if you are eligible for the free upgrade scheme and your system is powerful enough to run Windows 11… you might still not be able to install the new operating system on October 5. Microsoft has confirmed that its worldwide launch will be “phased” starting from October 5 in order to “focus on quality”. As such, it could take a few months before the update is available in your area.

This isn’t unusual, Microsoft has staggered the rollout of new updates throughout the lifecycle of Windows 10. This is designed to stop delays as millions of people try to download the latest software from the server on the same day. However, it also means that – should there be a show-stopping glitch or bug discovered early in the release – Microsoft will be able to pull the update before too much damage is caused.

However, with Windows 11, Microsoft is stretching out its release window for months. In fact, the Redmond-based company has admitted that not all Windows 10 devices eligible to upgrade to the next operating system will be able to do so until mid-2022. Yikes. You could be waiting nine months before you get your hands on Windows 11. By then, you’re likely going to be in need of a new machine rather than a software update.

According to design chief Panos Panay, Windows 11 was created to convey a “sense of calm and ease”. As a result, the sharp angular corners found across Windows 10 have been banished, replaced with softer, rounded windows. Colours are a little cooler across the board too, with the strong blue that characterised Windows 10 ditched.

Transparency has also been added across the software so you’ll still be able to see the application windows stacked behind menus – almost like you’re looking through a pane of translucent glass. Microsoft has redesigned every application icon across the operating system – yes, even the obscure ones hidden away in the Control Panel. Preinstalled software, including Paint, has also been given a fresh design to fit with the new aesthetics.

The Start Menu has been relocated to the middle of the screen, which Microsoft says is because you are the centre of the experience and so the menu should mirror that. Whatever the reason, it looks almost unrecognisable. The shortcuts to All Apps and the Power options have been hidden away. Instead, the main menu is filled with Pinned Apps and Recommended Apps. The latter will be based on your habits, with Microsoft’s clever AI algorithms suggesting applications throughout the day.

There’s also a search bar at the top of the new Start Menu that lets you look for applications, files, settings, and online results too. This replaces the Cortana search field built into the taskbar in Windows 10.

Windows 11 is not simply a face-lift for Windows 10, Microsoft design chief Panos Panay was keen to stress during the event.

When running the operating system, day-to-day performance should be much faster. That includes your existing PC when you upgrade to the new update as well as your next device that arrives with Windows 11 preinstalled. Likewise, Windows Hello – which uses facial recognition to log into an account – is also faster than the same machine running Windows 10.

Windows Updates have been slimmed down by as much as 40 percent, which means downloads should be much faster. Not only that, but those with devices with 4G and 5G mobile internet connections can keep their gadget updated while they’re out on the road. Updates are installed quietly in the background too.

Microsoft has a number of layouts to present multiple windowed applications on-screen at the same time. While Windows 10 let you snap two applications side-by-side, Windows 11 takes things a step further. Microsoft will a number of options based on the size of your screen, so those with more real estate will get more choice. But everyone will be able to juggle three or four windows of different sizes.

Dubbed Snap Layouts, these configurations are stored in memory. So, you can jump into Outlook to reply to an email, and then return to three or four applications configured in the same grid layout. Likewise, if you have everything set-up on an external monitor, unplug your laptop and then plug it back into the same screen, everything will return in its place. That’s handy for those who are working between an office and home.

Keeping on top of your applications will be critical moving forward as Microsoft confirmed that Android apps will be coming to all Windows 11 devices. Regardless of whether you’re running a laptop with a touchscreen, a tablet, or an expansive desktop PC with multiple screens …you’ll be able to run smartphone and tablet apps from the Google Play Store. These apps are treated exactly the same as native Windows software, so features like Snap Layouts will work too. You can even store Android apps in the taskbar.

Finally, Windows 11 includes some clever software optimisations borrowed from the Xbox Series X team to create “graphic capabilities that rival reality”. Not only that, but Microsoft will allow PC gamers to stream dozens of titles from the Xbox Game Pass, which includes access to over 100 triple-A video games. Some of the biggest games coming to Xbox this year, including the return of Halo and Starfield – the latest game from Fallout and Elder Scrolls studio Bethesda, will be coming to Games Pass soon. Like Netflix, you pay a flat monthly fee to access all of the games, although you won’t outright own any of them if you decide to cancel your membership.