Back in June Apple lifted the lid on its next blockbuster software update. iOS 14 is another big upgrade with iPhone owners set to be treated to a swathe of changes including the addition of widgets which can be packed onto the homescreen and display information such as weather, news and your daily calendar.

Apple has confirmed that iOS 14 will be available in the autumn but fans should be aware that they might not receive this upgrade at the time they’ve become accustomed to.

The US technology almost always releases its new iOS updates in September with the actual release date revealed during its big iPhone keynote.

However, due to the ongoing health crisis, this year could be very different.

Apple has already hinted that things will be delayed in 2020.

Speaking during the latest earnings call, which was held last month, Apple’s Chief Financial Officer Luca Maestri warned shareholders that sales of its next handset won’t be included in its next financial quarter, which runs until late September. 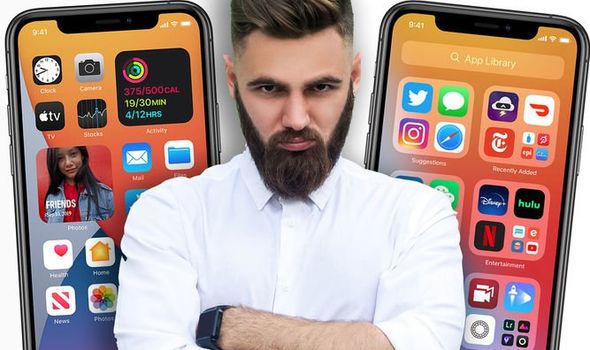 The first indication about iPhone sales likely won’t come until the end of the following quarter, which Apple calls Q1, and runs from early October to late December. This is when we’ll learn about pre-order numbers, sales over the Christmas period, and any supply constraints that might have stopped Apple from meeting demand.

“Last year we started selling new iPhones in late September, this year we expect supply to be available a few weeks later,” confirmed Maestri in the earnings call.

It’s unclear if Apple will still release iOS 14 in September despite no new iPhones arriving in stores but it seems far more likely that they will wait until the big keynote takes place which now looks likely to be in October.

If that’s the case then fans have a longer than usual wait for their current devices to get that big iOS 14 refresh.

Once it is released you can expect some pretty radical changes including the introduction of those widgets.

Yes, as we mentioned earlier, you will soon be able to transform the homescreen with everything from weather widgets and emails to activity levels and music. You can even change these information-packed squares to any size and add as many of them as you like.

And that’s not the only change as Apple is also adding something called App Library which allows you to hide those endless apps filling up your phone without actually deleting them.

Other updates include a better way to message your mates with group chats now easier to organise plus there’s some fun new ways to spruce up your Memoji characters with additional hairstyles, headwear and accessories. iOS 14 also brings picture-in-picture video to the iPhone for the first time. So, you’ll be able to carry on watching the football while you surf the web or chat with friends on WhatsApp.

Finally, Apple has changed how some apps work on iPhone. Instead of downloading a dedicated application for every takeaway order or cinema ticket purchase, Apple is now letting you access the most important part of the app straight from the homescreen. Called App Clips this addition will make it much faster to interact with a range of products and services and means your iPhone won’t be full of apps you’ve only used once.