“Is there any business that Tencent wouldn’t do?” he asked.

Mr. Wang’s quote led a 2010 magazine article about Tencent with a headline so famously profane — think the rough Chinese equivalent of an F-bomb — that two top editors were fired shortly after it was published. The cover depicted Tencent’s mascot, a chubby penguin wearing a red scarf, stabbed with knives, blood dripping to the floor.

Dramatic, perhaps, but back then the Chinese technology industry considered Tencent to be Public Enemy No. 1. It wouldn’t hesitate to copy somebody else’s idea and drive the upstart out of business. Its top executives were confronted at industry conferences and in media interviews. Entrepreneurs called it the industry’s most brazen copycat.

More than a decade later, the Chinese government is finally reining in the country’s most powerful technology companies — but not, at least for now, Tencent. While the company has drawn small penalties, the government has focused most of its attention on Tencent’s archrival, Jack Ma’s Alibaba empire. The government’s next target? It might be Tencent’s onetime rival, Meituan.

Only China’s antitrust regulators know why Tencent hasn’t drawn their full attention so far. As China’s biggest and most powerful technology company, with an outsize power to pick winners and losers, it still might — and probably should.

(Reuters has reported that the Chinese government is considering a fine of at least $1.54 billion against Tencent for failing to properly report past acquisitions and investments for antitrust reviews. If true, that would be smaller than the record $2.8 billion fine the government imposed on Alibaba in April.) 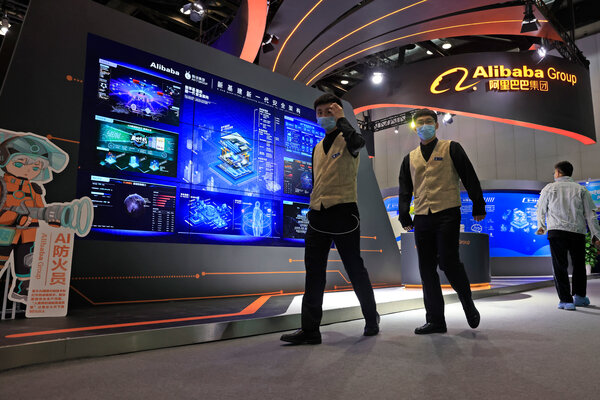 But one reason may be that the industry is no longer clamoring for somebody to take Tencent down. In fact, it has in many ways become the industry’s biggest and most deep-pocketed cheerleader. The company has managed to revamp its image by throwing money at the little guys and buying off competitors rather than driving them out of business.

No longer Public Enemy No. 1, Tencent now enjoys a status akin to an enlightened ruler of an expansive tech empire. A big chunk of the Chinese internet industry now belongs to what’s known as the Tencent ecosystem. That includes the hundreds of companies that it has invested in, including Mr. Wang’s — Tencent is now Meituan’s biggest shareholder, with a 21 percent stake. (Meituan didn’t respond to a request for comment.)

China’s tech companies “didn’t fall when Tencent was copying them,” wrote a widely shared blog post. “They lost their will to fight back and surrendered when Tencent held out a check.”

Tencent’s cozy relationships with many industry players may serve the company well. But it could still hold back competition and ultimately hurt China’s one billion internet users.

“Both Alibaba and Tencent control a lot of online resources,” said Yin Sheng, a tech consultant in Beijing. “Both of them can cause tremendous harm to our society if they choose to do evil.”

Tencent declined to comment for this column. In the past, it has said that it invests in high quality and innovative companies and that it embraces fair competition.

Few technology investors and executives will talk about either company publicly. But even confidentially, when I put my pen down and my notebook away, I hear a lot of grousing about how Alibaba treats the companies it invests in and the merchants who use its platforms — complaints that Alibaba hotly disputes. By contrast, these same people often describe Tencent and its founders as decent, humble and well behaved.

Some of that niceness comes from business necessity. Cozy relationships help cement Tencent’s power in China.

There’s no company in the world like Tencent. It’s a true monopoly on many levels. It wields the kind of influence in China that Facebook, Amazon, Apple and Google can only aspire to.

Tencent is a venture capital investor. In 2020, it lagged only Sequoia Capital, the Silicon Valley investment firm, in terms of the number of unicorns — start-ups valued at over $1 billion — it has invested in, according to the Hurun Report, a Shanghai research firm. By its own account, it has invested in more than 800 companies, including a 12 percent stake in Snap and 5 percent in Tesla. By comparison, GV, formerly Google Ventures and the most active corporate venture capital arm in the United States, has invested in more than 500 companies.

Most important, Tencent is a platform operator. It runs WeChat, a mobile messaging app with social media and financial services abilities. The WeChat business is where it becomes important for the company to have friends.

WeChat needs other companies to keep its one billion users glued to the app. An operating system and an app store in its own right, WeChat allows users to run miniprograms created and run by other companies. Those users can make purchases using WeChat’s payment system. Tesla, Airbnb and Starbucks all have their own WeChat miniprograms. So do most of major Chinese websites — barring those that WeChat forbids.

That’s where Tencent’s good relationships within the industry become important. Friendly companies build miniprograms for WeChat. Tencent invested in China’s ride-sharing and bike-sharing companies because their users pay frequently, and Tencent wanted them to use WeChat Pay.

The Tencent chief executive, Pony Ma, likes to say that half of Tencent’s life lies in the hands of its portfolio companies and partners. “When you grow, we grow together. When you fail, we as a platform fail, too,” he told a TV talk show in 2016.

That’s glossing over the huge power imbalance between Tencent and the many satellite companies in its orbit. Colin Huang, founder of Pinduoduo, hinted at that in a 2018 interview, in which he groused that WeChat declined to help censor accusations about fake merchandise on his shopping platform.

“Tencent won’t die when Pinduoduo dies,” he said, “because it has tens of thousands of sons.”

No matter how decent or humble Tencent may act, it’s a giant conglomerate with $24 billion in profit last year and spends much of it on investment. It picks winners and losers, but the winners won’t always be the best out there, thus harming innovation and efficiency.

It limits user access to other products and services. Its WeChat app doesn’t allow users to share links for merchandise on Alibaba’s Taobao online marketplace or for short videos on Douyin, TikTok’s Chinese sister company. (Other platforms block Tencent’s services.) When three social messaging apps were launched in January 2019, they were blocked on WeChat immediately.

Douyin’s parent, ByteDance, shows the possibilities when a company goes it alone. In its early days, ByteDance’s founder, Zhang Yiming, took a small investment from Tencent to fend off the company but resisted tighter ties. In a response to rumors that Tencent would invest in ByteDance in 2016, Mr. Zhang wrote that he didn’t start ByteDance to become a Tencent employee. He posted the lyrics of the song “Go Big or Go Home.”

Tencent doesn’t just court the industry. It has also long tried to get close to the government. Compared with the sometimes defiant Alibaba, Tencent has long publicly underscored its willingness to comply fully with rules and regulations.

In April, the company said it would spend $7.8 billion on green energy, education, village revitalization and other pet topics of President Xi Jinping. In the view of Hong Bo, an internet commentator, Tencent is acting for self-preservation.

“For the sake of securing its operation,” he said, “it has to look like it is shouldering more social responsibilities.”