It was a David versus Goliath fight. Apple, the iPhone giant, was suing a tiny repair store owned by Henrik Huseby in the Norwegian town of Ski. The case had gone all the way to Norway’s supreme court.

Huseby had been accused by Apple of importing allegedly “counterfeit” iPhone parts, including 63 iPhone screens, to repair phones at his shop. He was on the hook for tens of thousands of pounds in legal costs. 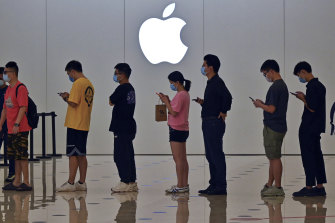 Apple and other tech titans are starting to go greener. Credit:AP

“What’s at stake is our right to repair – in Norway and everywhere else,” Huseby said ahead of the hearing.

In this case, Goliath triumphed. The court ruled in Apple’s favour in June last year in a move that was decried by “right to repair” activists.

These groups argue that big tech firms have made it difficult for independent shops to repair devices and in some cases make it so hard that consumers are forced to upgrade.

But last month, after years of being viewed as the movement’s arch nemesis, Apple performed an apparent volte-face. It announced a new “self-repair service”, offering to sell genuine spare parts, providing tools and opening up manuals so consumers can repair their own devices. The scheme will start next year and apply to its latest iPhone 12 and 13 models and its new generation of MacBooks.

Apple’s decision is likely to have ramifications for thousands of independent repair shops and its big tech rivals.

“This is a huge deal,” says Kyle Wiens, founder of iFixit, a US device repair website. “Where Apple goes, the whole industry follows.”

Over the past decade, smartphones have become harder to take apart for anyone lacking specialist tools or machines, without the risk of destroying the device. Apple became one of the first manufacturers to use a fully integrated battery in 2007, and rivals followed suit. More advanced screens and batteries meant tech firms could push consumers towards their own shops and repair services.

Activists argue this is contributing to a growing pile of electronic waste. A record 53.6 million tonnes of e-waste were produced globally last year, according to the UN.

Smartphones in particular use tiny amounts of rare earth metals that often have intensive and dirty extraction processes. It is not just the tech sector facing demands to improve repairs. Doctors have complained that medical hardware is made impossible to fix by anyone except the manufacturer, pushing up costs. Farmers have bemoaned John Deere tractors, claiming they cannot get the proper tools or diagnostic software to make repairs.

In some cases, tech firms have warned that allowing consumers to repair their own devices could be dangerous, due to the way batteries are integrated into the devices. Consumers also would run the risk of damaging the device due to parts being welded together in such a way as to make it all but impossible to take it apart.

However, tech companies have also been working to burnish their environmental credentials, investing in green energy supplies and recycled materials. They have also battled concerns that consumers are all too quickly encouraged to give up on an old device and upgrade even if it is still perfectly functional.

Apple, for instance, has increased the amount of software support it provides to iPhones, in some cases for more than five years. It has also cut down on the packaging in its new phones by no longer including chargers.

Its most recent MacBooks include fully recycled aluminium casings. The iPhone 12 also used recycled rare earth elements, which are notoriously challenging to recover, in its cameras and MagSafe connectors. A number of factors are pushing tech companies towards making it easier to repair gadgets and extend their useful life.

In the US, the White House issued an executive order in July to the Federal Trade Commission to draft rules forcing companies to make it easier to repair gadgets. It called restrictions on distributing official repair tools or manuals to independent repair shops “anti-competitive”.

“There are a lot of iPhones out there and people are frustrated by the repair options right now, particularly in rural areas,” says iFixit’s Wiens.

Meanwhile the European Parliament is planning to ensure consumer electronics can last up to a decade and has voted in favour of strengthening the right to repair smartphones. This week 500 NGOs, recycling firms and repair shops published a statement calling on the European Commission to go further and make it easier to replace batteries in devices, which too often go to waste.

“Manufacturers are wasting precious resources and forcing consumers to replace devices before they need to,” says Jean-Pierre Schweitzer at the European Environmental Bureau. The report estimated 675,000 tonnes of CO2 and almost €20 billion ($31.6 billion) could be saved by consumers by enforcing replaceable batteries. 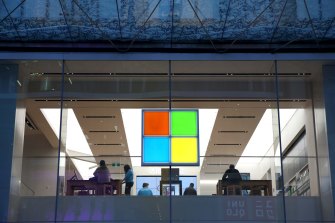 There are rumblings that Microsoft is considering offering a similar service to consumers as tech giants race to bolster their green credentials.Credit:James Alcock

The UK is also sharpening up rules around repair ability and durability. Tech companies will be required to tell consumers how long their phones will get software updates for. The Government has also introduced rules mandating that spare parts be made available for whitegoods and TVs.

Consumer group Which? says this is a good start, but it could go even further and apply to smartphone companies.

Sue Davies, head of consumer protection policy at Which?, says: “The Government could go further to protect customers by including smartphones and other products in its new right to repair rules.”

Other big tech firms are already moving to make their devices easier to repair, without having to replace the whole device, says iFixit’s Wiens.

“Microsoft has made rumblings about doing the same thing, and the new Google Pixel 6 seems designed with more DIY repair in mind,” he says.

Tech companies have also been working to burnish their environmental credentials, investing in green energy supplies and recycled materials. They have also battled concerns that consumers are all too quickly encouraged to give up on an old device and upgrade even if it is still perfectly functional.

Some have been doing so for longer. Fairphone, a Dutch smartphone company founded in 2010, developed a device based on conflict-free materials, that emphasises repair ability and has modular components that can be easily swapped out should they break or degrade.

“Keeping your phone longer lowers its environmental footprint. This approach means focusing on simple DIY repairs and replaceable parts. Enabling customers to repair their device is a great first step to making Apple’s phones more sustainable and it will be great to see them expand this initiative,” a spokesman said.

Apple’s initial repair service will focus on its latest phones and initially be available only in the US before expanding to include more devices and markets.

With smartphone makers vying to differentiate themselves from rivals, factors such as durability, environmental impact and how easy it is to repair their latest technology, could be their new key selling point.