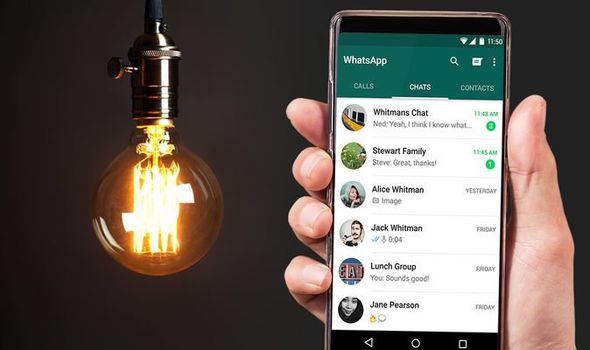 WhatsApp users desperate to test-out the feverishly-anticipated dark mode rumoured to be in the works for the popular chat app can get a glimpse of the new design thanks to a clever new trick. For those who don’t know, dark mode swaps all of the elements in the user interface that are typically bright white in favour of gloomier tones and pitch blacks.

For smartphones with OLED displays, this could result in a significant battery life boost… for everyone else, it just makes late-night texting a little easier on your eyes.

If you’re currently using Android, there seems to be a way to fool WhatsApp into enabling the new dark mode look ahead of its release. WhatsApp is believed to be in the final stages of testing for the new interface, which will purportedly ship in two possible shades of black. The first rumours of a dark mode surfaced some 18-months ago.

To get dark mode to kick-in, make sure you’re running the latest version of WhatsApp on Android. Then launch a chat and paste a link to a YouTube video into the conversation thread and click to play the clip in a picture-in-picture window. You’ll need to do this with the keyboard launched and ready to go.

That should trigger a bug that converts everything into a dark mode interface – boosting your battery.

The handy glitch was discovered by the team at WABetaInfo – a Twitter account dedicated to trawling through beta versions of new WhatsApp updates to discover new features and tricks before they launch to everyone through the Google Play Store, or Apple App Store. It was WABetaInfo that first uncovered evidence that WhatsApp was looking into implementing a dark mode – long before iOS 13 and Android 10 brought a system-wide version of the look to two of the most popular mobile operating systems on the planet.

Unfortunately, the glitch doesn’t seem to be working for everyone. While some Android users have reported seeing the elusive new dark mode appear immediately, others have had no such joy. And those who are using WhatsApp on iOS will seemingly just have to wait until the launch.

WhatsApp included a darker version of its trademark wallpaper in the latest beta version of its app, spotted by WABetaInfo, which was widely seen as evidence of an imminent launch for the dark mode interface. But despite a flurry of activity from WhatsApp – including a new call waiting feature, the ability to control who can add you into WhatsApp groups, and more – there is still no sign of dark mode.

Facebook, which owns WhatsApp, has already rolled-out support for the easy-on-the-eye new look in some of its other apps, including Facebook Messenger and Instagram. Why it’s taking quite so long to do the same with WhatsApp, which is now used by an unimaginable 1.5 billion monthly active users, is unclear.

As always, Express.co.uk will keep an eye out for more news on WhatsApp dark mode and when you can get your hands on the update. Stay tuned.