Virgin Media, BT, Sky and TalkTalk have all been put to the test in a bid to crown a winner of the fastest UK broadband supplier and there’s one firm that appears to be way out in front. This latest speed report comes courtesy of internet-obsessed blog ISPreview which used Thinkbroadband‘s independent speedtest database to work out exactly which firm offers customers the best average downloads. All of the most popular telecoms firms feature in results, but who comes out on top?

According to this independent test, Virgin Media has the fastest average download speeds by some considerable margin. Customers who subscribe to Virgin Media are experiencing average speeds of 98.3Mbps.

That’s a 9.58% bump on last year so Virgin Media has clearly been toiling away improving its service for the millions that rely on it each day. Coming second in the speed league is Zen internet with average speeds of 42.7Mbps recorded across the UK, followed by AAISP (42Mbps) and Vodafone (38.6Mbps).

Sadly, if you’re a BT, Sky or TalkTalk customer then you’re in for some bad news with none of these popular suppliers even ranked in the top five. Ouch.

BT broadband took sixth place with average speeds of 37.9Mbps while TalkTalk and Sky could only manage average downloads at 25Mbps. For context, the average UK home broadband speed is 68Mbps …so these speeds are quite far behind the majority of people in the UK. 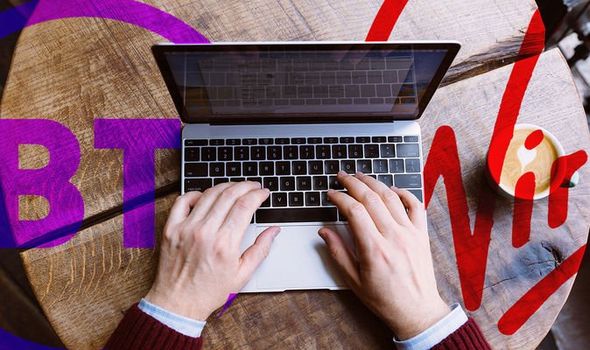 And things don’t really change when assessing these suppliers based on upload speeds either. Upload speeds are the amount of time it takes to back-up your iPhone to the cloud, or upload a YouTube video or send a document. If you’re working from home and need to quickly send files around the web, Virgin Media is your best bet. The ISP won that test as well with average upload speeds of some 13Mbps.

Again, Zen came second with AASIP third and Vodafone fourth. This latest report comes as all of the main suppliers are boasting that speeds are getting better for millions of consumers.

Virgin recently announced that it is offering big improvements to its service with its ultimate Gig1 broadband becoming available in more areas and more customers being offered its 500Mbps speeds.

Sky and TalkTalk have also announced that they are investing heavily in full-fibre which will not only make things faster but also much more reliable. In a statement to Express.co.uk, a TalkTalk spokesperson said: “As our lives increasingly move online, access to fast, reliable and affordable broadband has never been so important.

“Following our successful rollout of full fibre in the north east through FibreNation and our recent Openreach trials, we are delighted that we’ll be able to bring ultrafast connectivity to more customers in July.”

BT also continues to roll out its Fibre 1000 plan to more homes which will allow subscribers to download a full HD movie in under a minute.