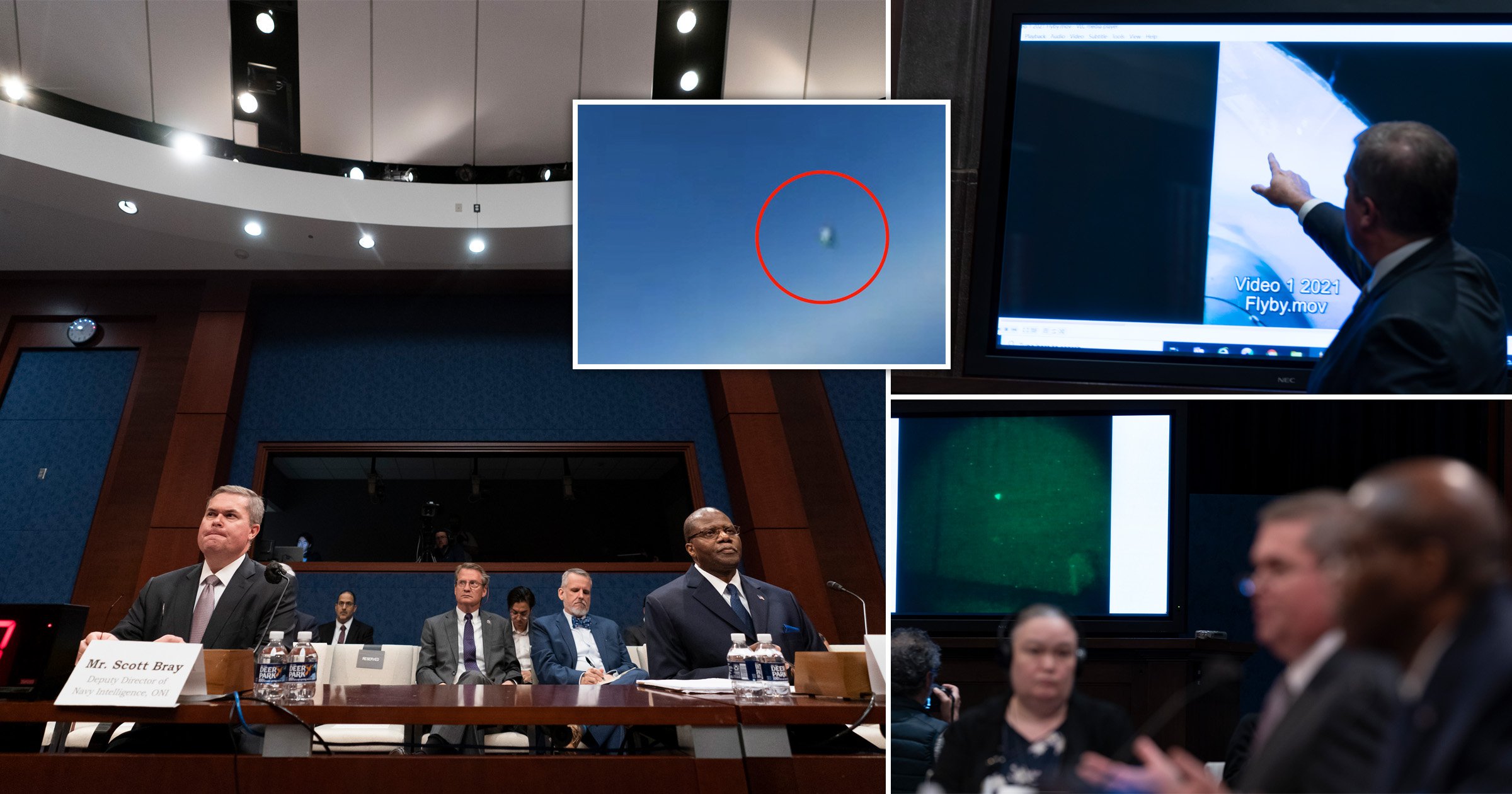 The Pentagon revealed declassified photos and videos of UFOs to Congress on Tuesday for the first time in over 50 years.

In one short video, a small object appeared to zip past a military pilot. A second video and photo showed two glowing triangle-shaped objects flying by an aircraft, viewed in the night sky through night vision goggles.

The visuals were displayed to the House Intelligence Committee’s Counterterrorism, Counterintelligence, and Counterproliferation Subcommittee during testimony from Deputy Director of Naval Intelligence Scott Bray and Under Secretary of Defense for Intelligence and Security Ronald Moultrie.

Bray presented the photos and videos to the committee, explaining that the triangles seen in the images had been unresolved for quite some time, but officials eventually identified them as unmanned aerial vehicles.

For the other visual, however, Bray said the military had no idea what was spotted zipping through the air.

‘I do not have an explanation for what this specific object is,’ Bray said in an exchange with Intelligence Committee Chairman Adam Schiff, a California Democrat.

Bray added that many unidentified aerial phenomena (UAP) reports have a ‘limited amount of high quality data and reporting,’ which prevents officials from drawing firm conclusions about some sightings.

While lawmakers warned there is still a stigma associated with UFOs, they conceded that they have the potential to be a real threat to national security.

‘For too long, the stigma associated with UAPs has gotten in the way of good intelligence analysis,’ said subcommittee Chairman Andre Carson, an Indiana Democrat.

‘Pilots avoided reporting, or were laughed at when they did. DOD officials relegated the issue to the back room, or swept it under the rug entirely, fearful of a skeptical national security community.’

Ronald Moultrie, who oversees the intelligence subcommittee, vowed that the Pentagon is committed to determining the origins of the unidentified aerial phenomena.

‘We know that our service members have encountered unidentified aerial phenomena, and because UAP pose potential flight safety and general security risks, we are committed to a focused effort to determine their origins,’ Moultrie said.

Last June, Congress requested a report on UAPs and the Office of the Director of National Intelligence (DNI) provided a preliminary assessment summarizing 144 incidents reported by military personnel dating back to 2004. The office was only able to explain one of those incidents.

Since that report, the Pentagon has made it its mission to ‘eliminate the stigma’ around reporting UAPs .

Moultrie said the Pentagon has not ruled out the possibility that these incidents could be connected to extraterrestrial life.

After the open hearing a separate closed hearing was held to brief the committee members.