The next phase of the TV technology war is about to kick off, with South Korean giants – Samsung and LG – squaring off against each other, jostling for a place in Australian living rooms.

The pandemic has driven a surge in TV upgrades and big-screen adoption, and arguably cemented OLED (organic light-emitting diodes) as the dominant display technology for premium televisions. LG sold more than four million OLED TVs globally in 2021 — double the amount it managed in 2020 — which LG Australia’s home entertainment marketing boss, Tony Brown, puts down to a mix of demand, the right product and good timing. 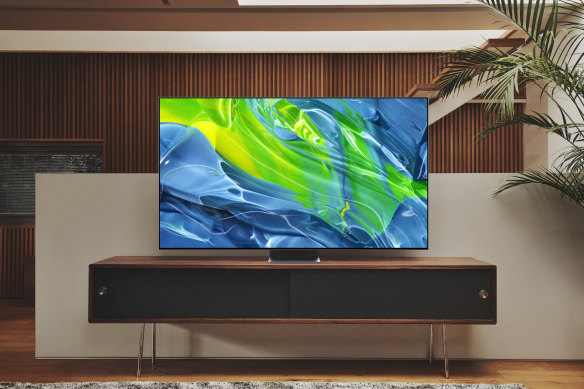 Samsung’s S95B is the company’s first OLED TV in around a decade.

“LG had been investing in OLED display factories for the last three or four years in China. We brought those on to production and they were the same quality as what we’ve been making in Korea, finally,” he said.

LG’s C1 TV was a big part of its success in 2021, offering picture quality and tech specs previously only found in much more expensive models, while also coming in a broad range of sizes from 48-inch to 83-inch.

“We were having a lot of conversations about whether Australians would like [the smaller TV models] because Australians love their big houses, big cars, big TVs. So, we put some posts up on social media asking if people would be interested,” Brown said.

Suffice to say, given the company ended up proceeding with the smaller model and shrunk things even further to 42 inches for this year’s C2, the response was positive.

“It’s rare in big companies that a Facebook post with some feedback changes the direction of a business, but it really did help us bring that 48-inch OLED model to Australia, and it’s been very successful and very much in demand,” he said.

Meanwhile, LG’s South Korean compatriot Samsung has introduced an OLED model of its own in 2022 — the first Samsung OLED to be sold in Australia since 2013 — following a decade of insisting its LCD-based QLED (quantum dot LED) technology was superior.

The company had favoured LCD for its brightness, but technology has now developed to the point that OLEDs can be almost as bright.

“We wanted to bring to market a screen that offered unparalleled picture quality and viewing experiences with the industry-leading colour and brightness that Samsung is renowned for, along with the deep blacks of OLED technology,” said Jeremy Senior, Samsung Australia’s vice president of consumer electronics.

“With Samsung OLED, we believe we have achieved that.” 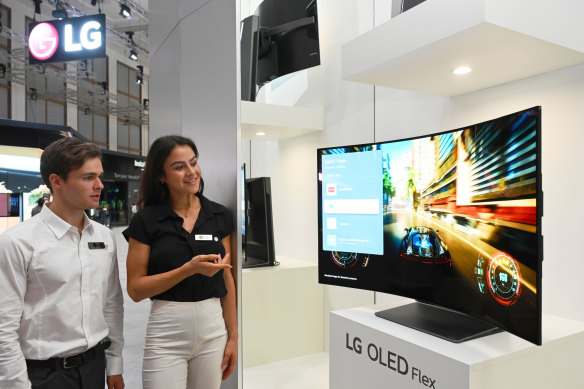 LG’s OLED Flex, shown at IFA, can be used as a normal flat TV or set at a range of curvatures.

Samsung’s OLED TVs are priced in step with LG’s C2, with both 65-inch models available for around $4500. Spec sheets point to small differences, including a brighter panel on the Samsung, and support for the Dolby Vision format on the LG, but they appear generally comparable. However, the first generation of Samsung’s new OLEDs are only available in 55- inch and 65-inch models; those wanting bigger or smaller will have to stick with QLED for now.

“Ultimately, Samsung’s TV range is all about choice without compromise,” Senior said.

But LG isn’t losing any sleep about the threat posed by Samsung.

“What we’re going to see is a lot of competition in the next three months for consumers, which will lead to some really amazing products being at pretty sharp pricing.”

But when it comes to design and connectivity, it’s LG that’s playing catch-up. Samsung’s had great success with its range of high-end fashion-forward TVs, including the artwork like Frame, rotating phone-like Sero and leg-mounted Serif.

This year LG has introduced similar concepts including the freestanding Easel and Posé, and at the Berlin tech fair – IFA 2022 – it’s showing off the world’s largest OLED TV (97 inches) as well as a bendable TV that can be set at any of 20 different curvatures to suit different spaces.

“In the next couple of years it will be more about the design and formatting of the product, as you see thinner and more flexible screens come out,” Brown said.

Meanwhile for Samsung, the message at IFA is all its products will be made more efficient, more sustainable and more interoperable thanks to greater connectivity and integration of its smart home platform. For TVs, Senior said that meant for example quickly and easily syncing up with soundbars or speakers, enabling seamless transitions between game consoles and cloud gaming apps, and collaboration between the TV and you connected appliances.

“Beyond screen size and picture quality, openness and connectivity will be what sets TV manufacturers apart in the coming years,” he said.

“Getting all of your smart home devices to work together has been an industry challenge for years, and it’s our focus to offer innovative products that don’t just improve the lives of consumers but accelerate the industry to be open, connected and always-evolving.”