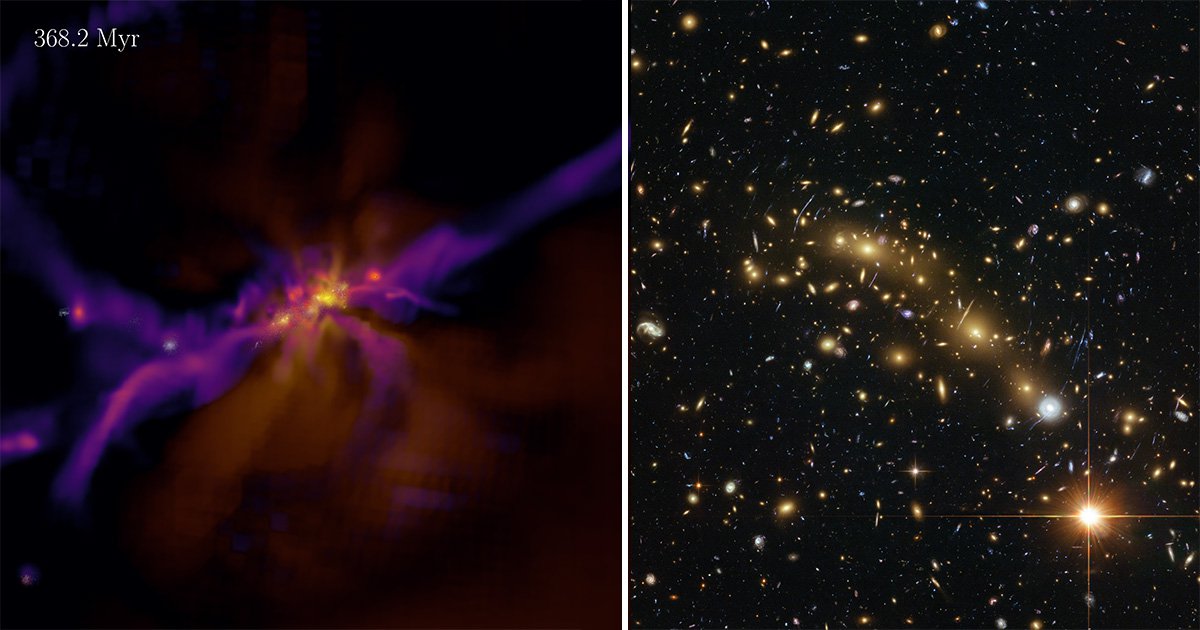 The formation of stars for the first time – the ‘cosmic dawn’ – occurred some 250 million to 350 million years after the Big Bang.

We know this thanks to a new study led by researchers at UCL and the University of Cambridge.

They examined six of the most distant galaxies currently known.

The light from these galaxies has taken most of the universe’s lifetime to reach us.

The team found the distance of these galaxies away from Earth corresponded to a ‘look back’ time of more than 13 billion years ago, when the universe was only 550 million years old.

Analysing images from the Hubble and Spitzer Space Telescopes, researchers calculated the age of these galaxies as ranging from 200 to 300 million years, allowing an estimate of when their stars first formed.

Lead author Dr Nicolas Laporte, of the University of Cambridge, who started the project while at UCL, said: ‘Theorists speculate that the universe was a dark place for the first few hundred million years, before the first stars and galaxies formed.

‘Witnessing the moment when the universe was first bathed in starlight is a major quest in astronomy.

‘Our observations indicate that cosmic dawn occurred between 250 and 350 million years after the beginning of the universe, and, at the time of their formation, galaxies such as the ones we studied would have been sufficiently luminous to be seen with the James Webb Space Telescope.’

The JWST, scheduled to launch in November, will be sensitive enough to observe the birth of galaxies directly.

The researchers analysed starlight from the galaxies, looking at a marker in their energy distribution that indicated the presence of atomic hydrogen in their stellar atmospheres.

This provided an estimate of the age of the stars they contain.

The hydrogen signature increases in strength as the stellar population ages but diminishes when the galaxy is more than a billion years old.

Researchers say the age-dependence arises because the more massive stars that contribute to this signal burn their nuclear fuel more rapidly and therefore die first.

Co-author Dr Romain Meyer, UCL Physics & Astronomy and the Max Planck Institute for Astronomy in Heidelberg, Germany, said: ‘This age indicator is used to date stars in our own neighbourhood in the Milky Way but it can also be used to date extremely remote galaxies, seen at a very early period of the universe.

‘Using this indicator we can infer that, even at these early times, our galaxies are between 200 and 300 million years old.’

The researchers estimated the redshift of each galaxy which indicates its cosmological distance and hence the look-back time at which they are being observed.

Ever since 1929, when Edwin Hubble discovered that the universe is expanding, it has been known that most other galaxies are moving away from us.

Light from these galaxies is shifted to longer (and this means redder) wavelengths – in other words, it is redshifted.

Co-author Professor Richard Ellis, UCL Physics & Astronomy, said: ‘Over the last decade, astronomers have pushed back the frontiers of what we can observe to a time when the universe was only 4% of its present age.

‘However, due to the limited transparency of Earth’s atmosphere and the capabilities of the Hubble and Spitzer Space Telescopes, we have reached our limit.

‘We now eagerly await the launch of the James Webb Space Telescope, which we believe has the capability to directly witness cosmic dawn.

‘The quest to see this important moment in the universe’s history has been a holy grail in astronomy for decades. Since we are made of material processed in stars, this is in some sense the search for our own origins.’