MIAMI — There was money in the air. Buzzwords floated around, like NFT, BTD, blockchain, token. There was a frenzied energy.

And there was heat — a humid, sticky South Florida heat; the kind all the Californians and New Yorkers who moved to Miami during the pandemic’s winter doldrums were warned about. The kind generated by thousands upon thousands of people gathering to worship at the altar of cryptocurrencies.

Such was the vibe at Bitcoin 2021, an occasional gathering of digital currency enthusiasts run by a magazine named after the cryptocurrency. Last year’s event had been postponed. But on Friday and Saturday, at least 12,000 people descended on Miami to make up for lost time, flocking to the largest Bitcoin conference in the world and the first major in-person business conference since the pandemic began.

The exuberance of being in person, indoors, in a crowd for the first time in more than a year was electric. Everyone hugged, no one masked. The money zipped between digital wallets. The conference swag included neon fanny packs, festival bracelets and a Lamborghini car. The jargon — stablecoin, peer-to-peer, private key — flowed. So did the liquor. 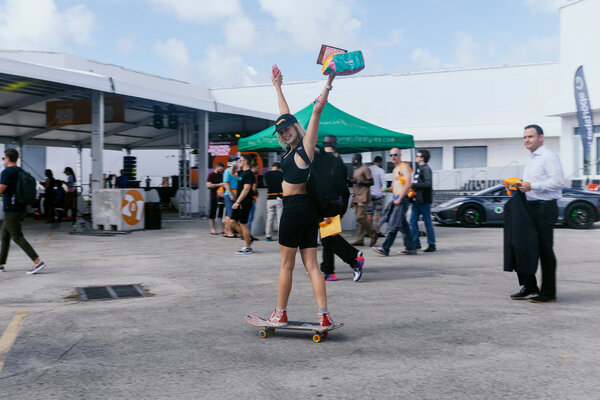 For a few days, the city was a raging fireball of finance, technology and joyful anarchy, of unfathomable wealth and desperate striving. Bitcoin 2021 heralded the receding of the pandemic, with comfortingly familiar and mundane elements of a business conference: the branded plastic sunglasses, brightly colored sponsor booths, lanyards and panels. Some attendees wore business casual. Others looked ready for a music festival. One donned a furry rave bikini.

It was another sign that the often absurd world of digital currencies was inching its way toward mainstream acceptance, or at least mainstream curiosity. Since late last year, Bitcoin has been on a wild ride, setting price records. Even a dramatic plunge from a high of $64,000 in April to $36,000 now did not dampen spirits. They’re BTD — buying the dip. Wall Street bankers, institutional investors and Senator Cynthia Lummis, a Republican from Wyoming, all came to Miami.

Was everyone there to schmooze, to revolutionize the global financial system or just to get rich?

Several attendees told me the event offered catharsis, a signal that the pandemic was really ending. The line on Friday morning to enter the venue, a warehouse and outdoor site called Mana Wynwood, stretched more than a mile. It was the largest crowd I had seen in a year.

Others were simply there to party. The bar opened right away and had as many takers as the coffee station.

‘You will be a millionaire’

There was a reason we were in Miami and not New York, San Francisco or Los Angeles. The city has gone full crypto.

Bitcoin A.T.M.s sprinkled the Wynwood neighborhood. A cryptocurrency exchange called FTX recently bought the naming rights to the Miami Heat’s arena. Miami’s mayor, Francis Suarez, announced this year that the city would accept tax payments in cryptocurrency, let its employees collect salaries with it and explore holding some on its balance sheet. (The logistics of these announcements were still being studied.)

Shortly after 9 a.m. on Friday, as the crowd streamed into the air-conditioned warehouse, a conference organizer introduced Mr. Suarez as “probably the most irresponsible politician in all of America, the mayor of the mecca of freedom.”

Mr. Suarez set a defiant tone. “I’m here to tell all the haters and all the doubters that this is not a moment, this is a movement,” he said. The crowd erupted in whistles and cheers.

Moishe Mana, the real estate mogul who owned the venue, walked around the crowded concourse of booths and crypto art with a small entourage. After working for years to bring companies, people and innovation to the city, he was basking in Miami’s ascent.

New York and San Francisco’s appeal was waning, Mr. Mana said. “Every city has its own golden age,” he added. “Nothing stays forever.”

Mr. Mana was not a big crypto guy, per se, but he recognized its power, comparing the devotion of its followers to a religion. “The more you fight religion, the more holy it becomes and the stronger the movement becomes,” he said.

“If you own a Bitcoin today, you will be a millionaire in the future. For sure. Congratulations,” he said.

Later, Jack Dorsey, chief executive of Twitter and the payments company Square, offered his own endorsement. “If I were not at Square or Twitter, I would be working on Bitcoin,” he said.

A few blocks away, in a warehouse co-working space called LAB Miami, about 50 people gathered to talk about the digital art and collectibles known as NFTs, or nonfungible tokens, which have exploded in popularity this year.

Around half of the group were Miami residents like Stephanie Davis, who left her job at Google in Silicon Valley and moved with her husband, Eric Kami, last year. Mr. Kami, who also worked at Google, has a sock start-up called Tribe Socks.

In Silicon Valley, leaving Google to work on socks would result in people asking if they were OK, Ms. Davis said. But in Miami, she said, “Everyone is saying, ‘Congratulations!’”

Addressing the room, Drew Austin, an entrepreneur and investor, described his success on NBA Top Shot, a site for buying and selling digital basketball clips. Another panelist, Alex Taub, cut in to clarify: “He basically spent $30,000 to $50,000 and it’s worth like $2 million-plus.”

Mr. Austin credited NBA Top Shot with making cryptocurrency accessible for mainstream users. “I’ve been preaching crypto to my friends since 2013 and the first time any of them have done anything with crypto is NBA Top Shot,” he said.

The conversation turned to the recent dip in the NFT market. The weekly value of NFT sales has fallen by 90 percent from its euphoric peak in early May, according to an analysis by Protos, a crypto-focused media company.

“Ninety percent of NFTs are going to be worthless,” Mr. Taub warned.

The conversation moved on to Zed Run, a site for buying, racing and breeding digital horses. Ali Spagnola, a popular YouTuber who started selling her paintings as NFTs, asked Roman Tirone, head of business partnerships at Zed Run, how long the digital horses lived.

“The horses never die,” he said.

Down the road at the historic Lyric Theater, a crowd sipped wine at a “Wine, Women and Crypto” gathering. Najah Roberts, a cryptocurrency executive, and Hill Harper, the actor who created an app called The Black Wall Street, explained that investing in cryptocurrency was a key step toward financial freedom and wealth for the Black community.

Only 14 percent of American adults have purchased cryptocurrency, according to a survey by The Ascent, a financial services ratings site. Of those who haven’t, 20 percent said they planned to this year.

One attendee, Shownda Pagan, a nonprofit executive, said she bought Bitcoin and another cryptocurrency, Dogecoin, over a year ago after her nephew and son encouraged her to do so. She also bought stock in AMC, the beleaguered movie theater chain, which has skyrocketed and become a “meme stock,” egged on by traders on social media. She said she was blown away by the fast rise of her holdings.

“Now I’m in love with this stuff,” she said.

As the sky turned pink and then black, Bitcoin 2021 splintered into cocktail hours, rooftop dinners, boat parties and clubs.

I witnessed colleagues who had worked together via Slack and Zoom for a year meet one another in person for the first time, hugging. Under string lights eating buffet sushi, a young man droned on about something called DeFi staking. EDM gently thumped.

Some gossiped about the previous night’s “Whale” party, thrown for attendees who bought a special $19,795 ticket to the conference, and speculated about who would win a boxing match on Sunday between Floyd Mayweather Jr., the former boxer and current crypto peddler, and Logan Paul, the YouTuber. (Mr. Mayweather had spoken at Bitcoin 2021.) Elon Musk, who can make cryptocurrencies fluctuate with a single tweet, was praised and derided.

After a year of isolation, it felt as if Twitter had come to life. But we were all there together, and the view was nice.