In mid-2019, a Reddit user — known as “Roaring Kitty” on some social media accounts — posted a picture on an online forum depicting a single $53,000 investment in the video-game retailer GameStop.

The post attracted little attention, except from a few people who mocked the bet on the struggling company. “This dude should sell now,” a Reddit user named cmcewen wrote at the time.

But Roaring Kitty was not deterred. Over the next year, he began tweeting frequently about GameStop and making YouTube and TikTok videos about his investment. He also started livestreaming his financial ideas. Other Reddit users with monikers like Ackilles and Bowlerguy92 began following his every move and piling into GameStop.

“IF HE IS IN WE ARE IN💎💎💎,” one user wrote on a Reddit board called WallStreetBets on Tuesday.

Roaring Kitty — who is Keith Gill, 34, a former financial educator for an insurance firm in Massachusetts — has now become a central figure in this week’s stock market frenzy. Inspired by him and a small crew of individual investors who gathered around him, hordes of young online traders took GameStop’s stock on a wild ride, pitting themselves against sophisticated hedge funds and upending Wall Street’s norms in the process.

Their actions — pushing up GameStop’s price by buying so-called options contracts that offer a cheap way to bet on a stock’s direction — have shocked established investors because Mr. Gill and his online comrades are the antithesis of the Wall Street titans who have long ruled the stock market. 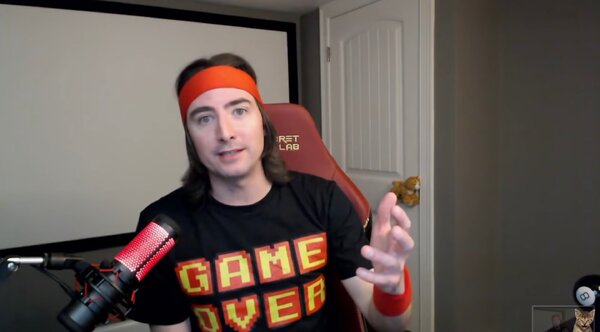 Working far from well-heeled financial offices, Mr. Gill and his fans socialized on Reddit and YouTube and used no-fee online trading platforms like Robinhood and WeBull. Many were so devoted to their GameStop investment that they spent hours each week chatting in the comments section of Mr. Gill’s videos, delving into the company’s financial filings and arcane details about free-cash flow and video game consoles.

Their show of force this week underlines how the financial markets have changed by merging with the world of social media and a younger generation of traders who have been empowered by online platforms. It has also made some in this new generation wildly wealthy.

On Tuesday, Mr. Gill posted a picture on Reddit that showed his $53,000 bet on GameStop had soared in value to $48 million. (His holdings could not be independently verified.) The post was “upvoted” — the equivalent of being liked — more than 140,000 times by other users. GameStop, which traded at $4 a year ago, closed on Thursday at $193 after reaching more than $480 earlier in the day.

“Your example has literally changed the lives of thousands of ordinary normal people,” a Reddit user named reality_czech wrote this week to Mr. Gill. “Seriously thank you.”

Larry Tabb, the head of market structure research at Bloomberg Intelligence, said the rise of traders like Mr. Gill “would have been impossible even a few years ago” because every trade came with a fee and there was less focus on the markets on social media. But with people now stuck at home in the pandemic with easy access to free trading at online brokerages, “these guys saw an opportunity and they took it,” he said.

Mr. Gill did not respond to requests for comment. His online accounts and email addresses were tied to his old office in New Hampshire and his Massachusetts home. Mr. Gill’s mother, Elaine, confirmed in a brief phone call that her son was Roaring Kitty.

“I’m proud,” she said, before hanging up.

Mr. Gill’s life as Roaring Kitty began in 2014 when he started a limited liability company with that name. Before that, he was an All American runner in college who could cover a mile in 4 minutes 3 seconds, according to local newspapers. After graduating, he worked as a chartered financial accountant and a financial wellness educator, a recently deleted LinkedIn profile showed.

Mr. Gill’s first posts on WallStreetBets showed the screenshot of his E-Trade portfolio with the options trades he had made on GameStop, all of them betting the stock would go up. In the comments, he explained that Wall Street did not appreciate how much GameStop would benefit as new video game consoles were released.

Shortly after Mr. Gill placed his trades, Michael Burry, an investor made famous by the Michael Lewis book “The Big Short,” also expressed interest in GameStop. On Reddit, Mr. Gill pointed to Mr. Burry’s post as validation. When others questioned the investment, Mr. Gill held firm.

“Dude everyone thinks I’m crazy, and I think everyone else is crazy,” he responded to a commenter when GameStop announced sales had dropped 30 percent in late 2019.

Last summer, Mr. Gill started a Roaring Kitty channel on YouTube where he talked for hours about GameStop. He had 418 YouTube subscribers through last November, according to the web tracking firm SocialBlade.

In one of his first YouTube videos, he wondered aloud, “Maybe there’s going to be no one tuning in, so this is silly.”

He explained that to avoid disturbing his 2-year-old daughter, he was filming in a basement room called the “Kitty Corner,” with a stuffed animal cat on the doorknob.

Fast-talking and cracking jokes in between analyzing stocks, Mr. Gill sipped beer, brandished cigars and told viewers he sometimes used a Magic 8-Ball to guide his investments. He often wore a baseball cap over his long hair and a T-shirt with a cat in sunglasses.

The comments section of his videos soon became a gathering place for a small group of other GameStop fans. One YouTube follower, Joe Fonicello, known as Toast on Twitter, said he tuned in from an old van that he was traveling across the country in with his girlfriend.

“She thought I was crazy until she heard the thesis” for what GameStop could be worth, said Mr. Fonicello, 21, who said he and his girlfriend’s investment in the stock has grown to over $250,000 this week from less than $10,000 originally.

Mr. Fonicello said chatting with Mr. Gill and others online was not just about money. “What went from a great few hours of stock analysis turned into a few hours of just spreading positivity,” he said.

Last August, Ryan Cohen, the founder of the pet food site Chewy.com, announced that he had taken a big stake in GameStop. A few weeks later, Mr. Gill’s investment hit $1 million, according to pictures he posted of his portfolio.

Through financial filings, Mr. Gill’s crew also discovered that hedge funds such as Point72 and Citron Capital were betting that GameStop’s price would fall, in a maneuver known as short-selling. That angered them.

“That’s your ignition switch. A common enemy, so to speak,” said Rod Alzmann, 31, a corporate strategist in Florida who has bet on GameStop for even longer than Mr. Gill and posted online as Uberkikz11. “The speculation is a rush, plus fighting the man.”

In December, Mr. Gill’s wife made a cameo on YouTube when her hand appeared on a livestream to clink glasses with him to celebrate GameStop’s stock reaching $20. Mr. Gill wore a pink party hat and sunglasses and sipped what appeared to be champagne.

“I certainly do not drive a Lambo,” he said in the video, referring to a Lamborghini. “We rent this house that you see, so it’s been a wild ride for us as a family.”

Earlier this month, Mr. Cohen joined GameStop’s board. That caused the company’s stock to rise, enriching Mr. Gill and others. When Mr. Gill showed another picture of his investment on Jan. 13, some of the 44,200 people who looked at the post said his decision not to cash out even a penny of GameStop kept them going.

Late last week, 190,000 viewers tuned in to the Roaring Kitty YouTube channel, which now has more than 74,000 subscribers, as Mr. Gill, in a red bandanna and sunglasses, said he would be stepping away “for a bit.” That day, he livestreamed for seven hours while watching a chart of GameStop’s surging stock, laughing and calling out to longtime comrades in the comments.

On Thursday, several online brokerages shut down trading in GameStop, causing the company’s price to plunge by almost two-thirds before steadying. Even ardent supporters wondered if Mr. Gill had finally caved and sold.

Mr. Gill then posted another picture on Reddit showing he had stayed firm — and had lost $15 million. His fans cheered.

“IF HE’S STILL IN, I’M STILL IN,” over 100 different followers responded in quick succession.