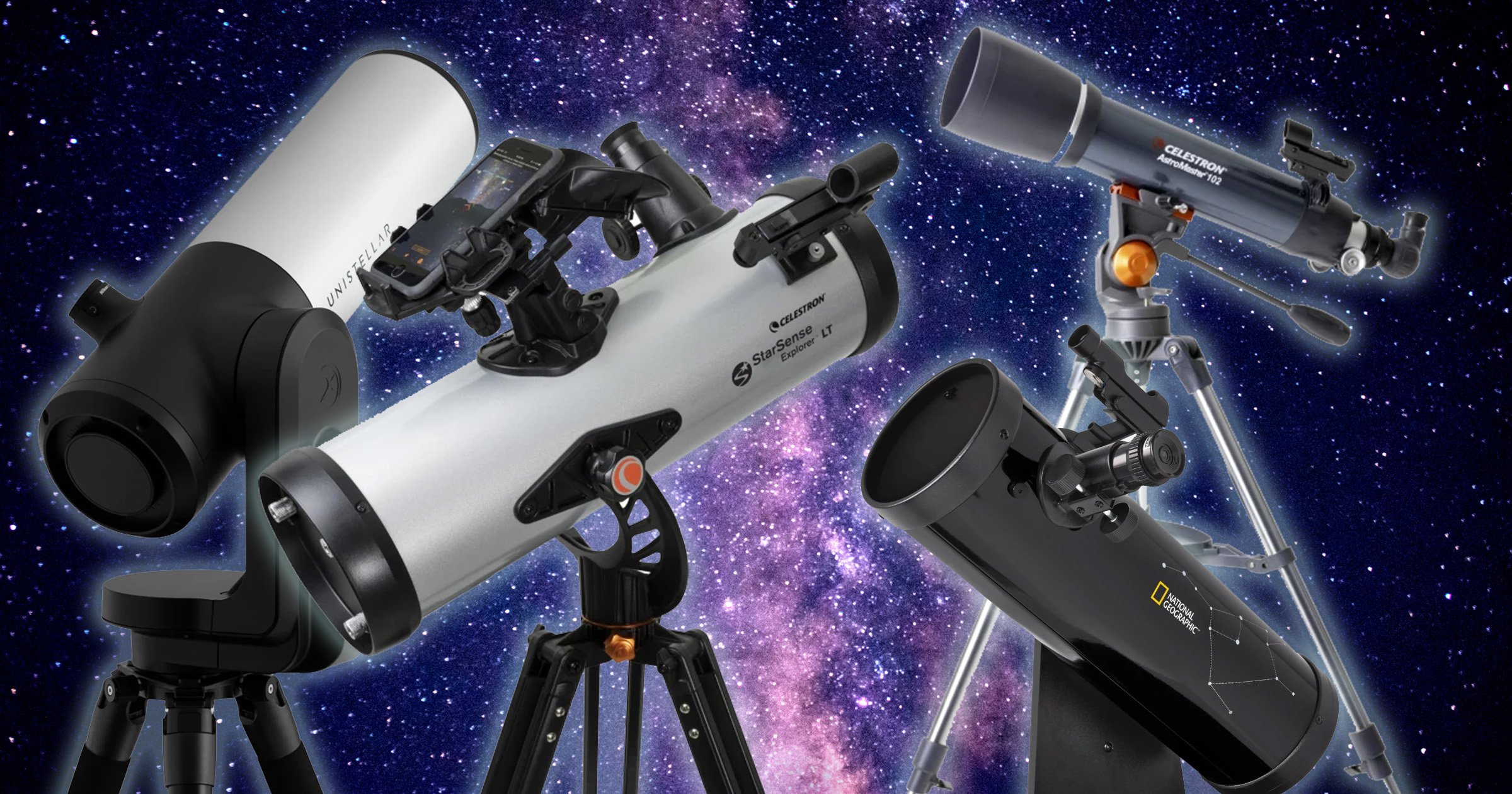 At Christmas, we’re reminded that three wise men followed one.

On TV, we have physics professor and national treasure Brian Cox discussing them.

In 2000, we even had pop philosophers S Club 7, who clearly possessed no knowledge of distance in light years and the limits of human anatomy, suggesting we reach for them.

Enthused by the Webb Telescope and these great minds, I’m getting my stargazing groove on and preparing to make my own first contact with astronomy thanks to several tech-enabled telescopes…

If you’re fascinated by astronomy but the reality of learning to identify constellations by spending time outdoors in the cold and dark is totally alien, we have you covered.

The eVscope eQuinox (£2,599, unistellaroptics.com) may look like a traditional astronomy telescope but it’s not.

Download the allied app, pair it with the scope, get the device’s autonomous field detection to recognise which bit of the sky at night it’s pointing at, and you’re up and running. The app gives you information about what you can see, how long it will be visible and what else is available if you fancy a poke about.

Once you’ve selected a target, the motorised mount whirrs pleasingly into action, moving vertically and horizontally until it has located its target. You don’t look through an eyepiece on this telescope, though. You view the

image on a tablet or phone screen through the app. Then you can snap a picture and upload it to social media, demonstrating you’re not the type of cosmic voyager who gets easily lost in space. Note to readers: more sci-fi movie and TV series name checks are coming up.

Stellina (£3,327, vaonis.com) is a similar proposition to eQuinox, even though it has a different aesthetic. Users place the futuristic-looking white plastic rectangular box on to a tripod.

Once set up, the middle section of the device rotates out to point at the stars. This central column houses the telescope and the astrophotography wizardry. It also scans the area of the sky it’s facing. Users can then select constellations, galaxies or other celestial objects on the app for the scope to find — and it will then deliver pictures of the results to your device screen.

I can’t select a favourite from these two scopes. I’m equally wowed by both. Set-up is simple and their allied apps are easy to understand and intuitive to operate. You can even place them in your garden, then sit on the sofa indoors observing the universe while technology does the heavy lifting.

There is, however, a price attached to this level of amazing. Also, as a novice astronomer, you may want to conduct your own space odyssey by doing some of the work yourself. Fortunately, there are plenty of products on the market that provide a tech halfway house…

This is a more traditional point-and-search scope, where users navigate their way through the sky manually via a laser sight. The StarSense app, however, hugely helps with this.

Once downloaded, your mobile is placed on a dock attached to the scope. The phone’s camera combines with the app software to take a snap of the sky. Once identified, the app guides you to whatever body you’re trying to locate via a series of arrows on your mobile screen that act like a satnav.

Another Celestron favourite is the AstroMaster 102AZ (£230, amazon.com). While it doesn’t utilise a phone dock, tech elements are provided by access to Starry Night software, which users download on to a computer, and the Sky Portal mobile app, which helps users search the sky.

This refractor has a laser sight, an impressive build quality, a substantial tripod, strong mounting and a solid panhandle control to tilt the scope. I used the software to plan my viewing, and a combination of the app and the laser sight to locate targets.

This enterprise was pretty easy and even I located obvious stars such as Betelgeuse in Orion, Vega in Lyra and Deneb in Cygnus. I appreciate these are small triumphs. But I’m a fan of this mix of app-enabled guidance and manual operation because I feel like I’m learning by doing some of the work myself.

If you’re buying for a youngster, the National Geographic 114/500 Compact Telescope (£109, bristolcameras.co.uk) is pretty good. On its movable base is a compass and 360-degree markings so users can find north and the position of objects on the horizontal axis, before using the marked handle on the height adjustment wheel to locate them on the vertical.

I kept this scope on the desk in my office and used it to observe the Moon — the clarity was great. I even managed to use manual coordinates to locate Mars.

There’s new hope I could enjoy astronomy yet. Yes, that was another sci-fi film reference.

You’re outside, it’s dark and it’s cold, and you’re using an app to locate Jupiter ascending. Then you drop and break your mobile phone. Oops… but with the Cat S62 Pro (£499, catphones.com), you have no such worries.

This durable delight is encased in a high-grade aluminium body and a rubberised non-slip coating.

Boasting a toughened scratch-proof Gorilla Glass 6 screen, it’s drop-proof, dust-proof and waterproof. It also possesses a heat-sensitive camera so you can check what’s creating that rustling sound near your flask in the pitch black.

The makers sent two of these phones into a 35.3km orbit to test their durability credentials. Both survived intact.

Not content with a regular telescope? Here are some of the biggest… in the universe.

In 1990, the Hubble Telescope launched to help study the cosmos. But a flaw 1/50th the thickness of a human hair in its primary mirror threatened to scupper the $1.5 billion project.

Repaired during a 1993 Space Shuttle mission, Hubble has allowed scientists to more accurately date the universe at 13.8 billion years old.

This planet, 20 light years from us, exists in the ‘Goldilocks zone’ — meaning it’s at a distance from its star that isn’t too hot or too cold. Initial speculation suggested it could support life.

The Event Horizon Telescope (EHT) is not one device. It’s a network of observatories in Chile, Greenland, the South Pole, Hawaii and other places.

Like an astronomical Avengers, these institutions combine their powers and, in 2019, EHT produced the first direct picture of a black hole 6.5 billion times the mass of the Sun.

Launched on Christmas Eve 2021 from French Guiana, this $10 billion masterpiece of engineering is the largest and most powerful space telescope ever constructed.

It will deepen our understanding of the origins of the universe by observing parts of space where the first stars and galaxies formed.