As the international mobile standards body meets in Australia this week, Telstra chief Andy Penn is making a last-minute push to ensure 5G copes with the challenging conditions of our country.

The telco is hosting the 3GPP mobile standards body on the Gold Coast, where 600 delegates from around the world will ratify the international standards to underpin the new 5G mobile networks and devices.

While 5G offers faster download speeds by using higher frequencies, the trade-off is signals can't reach as far. Previous mobile standards were designed for more densely populated regions like Europe and the US, but when applied to Australia they can mean sparse coverage for our far-flung population. 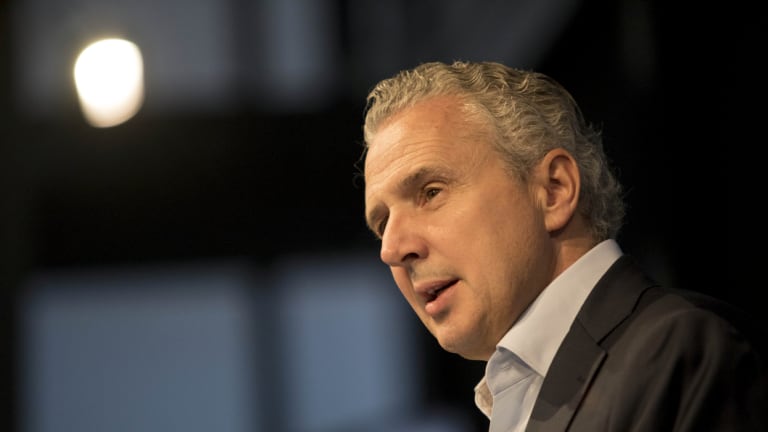 Andy Penn is pushing for a 5G standard that suits Australia.

The Telstra chief executive tells Fairfax Media he is "confident", however, that the final 5G standard will allow for each mobile tower's reach to be extended from 35kms to around 200kms, meaning better coverage even in the bush.

In terms of the number of people using it globally, Penn expects 5G coverage to spread more quickly rather 4G, just as 4G outpaced its predecessor. Yet even if long-range 5G standards are adopted, he can't guarantee that Telstra's 5G network will ever match the footprint of today's Australian 4G coverage.

"The short answer is I don't know the answer to that question," Penn says, "but what will happen is 5G will be integrated with 4G — bonded together — and ultimately it will become the predominant technology."

Telstra is already rolling out 5G coverage in regional cities like Toowoomba, and has committed to deploying 200 5G-enabled base stations across the country by the end of the year. The telco plans to launch 5G services in 2019, as does rival Optus, although the first devices will be mobile hotspots. The first 5G-capable smartphones are expected to come later.

The network will initially run over the 3.4GHz band, with plans to add faster short-range 26GHz "millimetre wave" bands once those frequencies are auctioned off by the government. This wait won't slow down the footprint of the 5G rollout.

While the 26GHz band can offer a significant speed boost, Penn says it is possible the high-frequency band could be reserved for business usage, and not just limited to metro areas. Its short range is better-suited to fixed-wireless devices, rather than mobile devices which would be forced to regularly jump between base stations when on the move.

Telstra's standard home NBN broadband modem currently switches across to the 4G network during a fixed-line outage and Penn says it would "absolutely make sense" to upgrade this to 5G as it becomes available.

"Customers just want to have the best experience where and when they need access, and we as an industry — including the NBN — have got to find ways to continue to solve that for customers," he says.

Even so, he insists that fixed and mobile broadband each have their strengths and weaknesses.

"The average fixed broadband customer at home uses about 50 times as much data as the average mobile customers," Penn says. "To provide that sort of capacity on a mobile network has very significant capital implications."

"Then you've got the NBN which is the wholesale provider for fixed broadband, so there are some structural issues that we will need to navigate our way through, but from a customer's point of view they just want the best possible experience."

With the federal government's recent decision to ban Chinese-owned manufacturers — including Huawei and ZTE — from providing equipment to Australian 5G networks, the melding of the old and new networks could present issues for telcos that have used gear from those providers in their 4G infrastructure. But Penn says Telstra will be unaffected.

"All of our radio access equipment is Ericsson for 4G and for 3G, so that's not an issue for us," he says.

Telstra is already managing to squeeze 2Gbps speeds from its 4G network, and while 5G can push this to 10Gbps, Penn says 5G's ten-fold increase in capacity will have a bigger impact on overall network performance.

Mobile data usage is growing at 30 to 50 per cent each year for Telstra customers, making 5G important for dealing with mobile peak-hour traffic jams.

"You can drive your car on the freeway and go fast, but good luck if there are thousands of cars in front of you, that's a capacity problem," Penn says.

"I need to deploy 5G, frankly, just to deal with the volume of data usage I know is coming if you project out the current usage trends, particularly for streaming video and live sport."

In August, Telstra saw its biggest ever demand for mobile sports coverage with 1.2 million streams over a single weekend with a peak of 500,000 simultaneous viewers.

"It is those sorts of things which have caught operators out," Penn says. "Without being critical of my competitors, there have been events where they've just completely got the loads wrong and it's completely crashed."

"Working with partners, we can plan and manage the network load so viewers get a great experience."