Nearly every weekday morning, Valentin Vivar curls up in bed next to his older sister, Araceli, and switches on one of his favorite television shows.

After the coronavirus pandemic shut down their schools in March, the siblings attended virtual classes from their apartment in Queens on Araceli’s iPhone. Their parents could not afford another device, and their class attendance was sporadic because sometimes both had school at the same time. Valentin, who needed speech therapy, was missing out on conversations with classmates, and he was struggling to pronounce words.

Then a teacher told them about the television program, and Valentin was hooked. He sounded out letters and words and formed strong bonds with the teachers he saw onscreen.

Now, Valentin “wants to read books by himself, and he’s writing new words,” Araceli said. “I really like to see him learn and grow.”

Around the country, educators and local television stations have teamed up to help teachers make their broadcast debuts and engage children who are stuck in the doldrums of distance learning. The idea — in some ways a throwback to the early days of public television — has supplemented online lessons for some families, and serves a more critical role: reaching students who, without reliable internet access or a laptop at home, have been left behind.

In some places, the programs air on weekends or after school. Elsewhere, districts have scheduled time to watch it during the school day. In New York, the program airs every weekday on a public television channel, part of a network of PBS stations working with school districts.

Fox stations in several cities are airing teachers’ lessons as well, thanks to Melinda Spaulding Chevalier, a Houston resident and former TV news anchor who thought of the concept in March. She pitched a daily program featuring teachers to her old boss, D’Artagnan Bebel, the general manager of Houston’s Fox station. He was in.

Less than two weeks later, local educators were on the air, teaching condensed lessons for an hour.

In Houston, an average of 37,000 people watched the program each time it aired in the spring, and about 2,200 people were watching the San Francisco version each day this fall, the TV stations said. “We Still Teach,” the Chicago version of the program, which began in May, reaches 50,000 households in the area each weekend, according to Nielsen.

“We’re not solving the digital divide, but from my experience with the personal connection of coming into a viewer’s kitchen or living room, I felt this could be a more immediate way to help bridge the gap,” Ms. Spaulding Chevalier said. “We’re letting them know they haven’t been forgotten.”

The divide in education between families that can afford laptops and strong Wi-Fi signals and those that can’t has been well documented, and often affects rural areas and communities of color. In 2018, 15 million to 16 million students didn’t have an adequate device or reliable internet connection at home, according to a report from Common Sense Media, a children’s advocacy and media ratings group that receives licensing fees from internet providers that distribute its content.

The gap between the haves and the have-nots has been exacerbated by school shutdowns. As recently as October, at least thousands of students in the United States were still unable to join remote classrooms because they had no access to a laptop. But 96 percent of Americans were estimated to have a working television set, according to Nielsen.

Ms. Spaulding Chevalier’s sister, Tamika Spaulding, who produces the Chicago version of the program with her friend Katherine O’Brien, said they had acted with urgency.

“There are a lot of plans to address the digital divide, but they have four-year rollout plans,” Ms. Spaulding said. “So what are you doing for the student today, right now, who’s just not getting educational content?”

The plan was embraced by hundreds of educators who agreed to set up tripods in their living rooms, assemble makeshift props, send in footage and make their broadcast debuts. Some of their content is aimed at younger children, and other segments target high school ages. 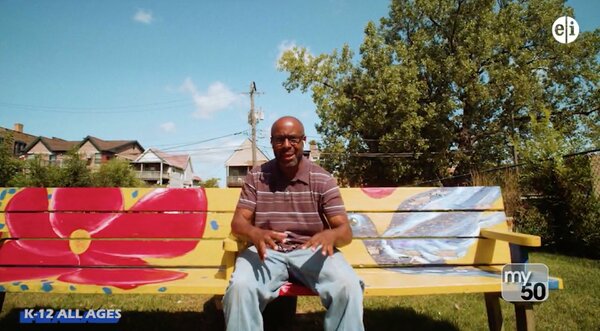 Erik Young, a high school social studies teacher in Chicago, said he had jumped at the chance to provide extra help to students stuck at home.

“It was needed for lots of us,” he said. “In addition to us missing our students and our school family, you really do miss the camaraderie.”

Mr. Young filmed a series of social studies quiz shows and cheesy history poetry in his basement on his daughter’s iPhone, starting over whenever he stumbled over a line. His efforts epitomized what the show’s creators consider one of the program’s most endearing characteristics — a grass-roots, rough-around-the-edges quality.

“This is what we do — creating something out of nothing is quintessentially what it feels like to be a Chicago Public Schools educator,” said Stacy Davis Gates, the vice president of the Chicago Teachers Union.

The Fox stations are airing the educational program for free, without requiring districts to pay for airtime and without running commercials. Future Chicago broadcasts are dependent on whether the creators continue producing it.

Educators say the program has helped children form deep connections with the teachers they see onscreen — a classroom type of relationship that is tough to reproduce through remote learning.

“There are no frustrating tech disruptions,” Ms. Spaulding Chevalier said, explaining why children are often more drawn to the teachers on TV than on a computer screen. “Students are able to focus on the lesson, on a larger screen, and with a medium that’s comfortable.”