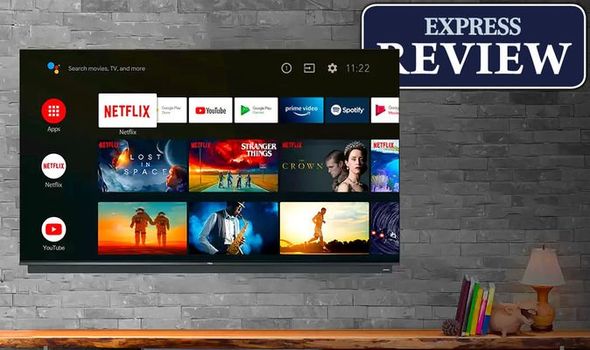 How much do you need to spend to get a great TV? It’s a tough question, but Chinese brand TCL thinks it has the answer. And that answer is: “not as much as you’d think”.

The telly brand has made a name for itself in the UK, mainland Europe, and the United States offering aggressively-priced TVs that strike a good balance between price and quality. When TCL announced plans to bring QLED panels to its most reasonable price point yet, we wanted to check whether the brand was still maintaining that balance between price tag and quality viewing experience. Express.co.uk has been watching movies, bingeing boxsets and streaming sport on the TCL C81 Series for a few weeks now. Here’s what we think.

TCL’s C81 Series is available in three sizes: 55-inch, 65-inch, and 75-inch. Aside from the panel size, there aren’t any other notable differences between the sets. TCL doesn’t sell its TVs direct from its website, but does offer links to retail partners, including AO, Amazon, Hughes, and Costco. All three pack the same technology, with the only real difference being the size of the panel that’ll squeeze into your living room. Prices start from £670 and max-out at £1,149 for the 75-inch model.

Thankfully, in our testing, that doesn’t translate into a telly that’s only half as good. Part of that comes from the hardware, but the software plays a large role too. One of our biggest issues with affordable TVs is the clunky operating system that powers them — this software is often slow, struggles to play any media formats from a USB, doesn’t support half of the streaming apps you want to install, and never gets updated.

That’s something TCL has got very right. The Huizhou-based firm has turned to Google for the operating system on its C81 range. Android TV is fast and stable. It doesn’t offer all of the bells and whistles we’ve seen with Google TV, which launched last year alongside a new Chromecast and offers boxset and film suggestions based on your viewing history as well a more modern user interface design. However, Android TV supports most of the streaming services you’ll want to watch, including Netflix, Amazon Prime, Disney+, and YouTube.

Crucially, these are all capable of streaming in 4K HDR, so you’ll be able to take full advantage of that shiny new QLED panel. The C815 also packs Freeview Play, which offers access to all the major terrestrial channels and their respective catch-up services. 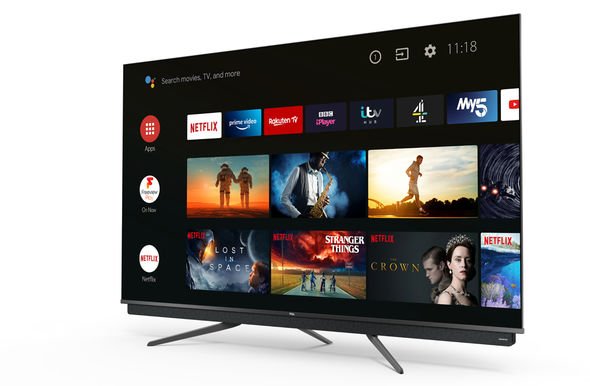 Android TV in the TCL C81 also supports Cast functionality straight out of the box, so there’s no need to invest in a Chromecast to wirelessly beam video, gameplay, or Chrome browser tabs onto the big screen. Friends and family on your Wi-Fi network can queue-up songs on a YouTube playlist using the feature too.

And finally, there’s support for the Google Assistant baked into the TCL C81. The telly ships with two remote controls — a smaller minimal design, as well as a more traditional button-laden model. But truth be told, you don’t really have to bother with either.

Thanks to the hands-free Google Assistant support, the TCL C81 acts like a Google Nest smart speaker. So, you can use the wake phrases “OK, Google” or “Hey Google” to summon the AI assistant to change your channels, pause the action on-screen, or search for a movie or actor (handy if you’re struggling with the spelling of either!). Not only that, but Google Assistant is also capable of all its usual tricks too, so it’ll check the traffic on your commute, read out the latest headlines and weather report, control any smart lightbulbs, and more.

If you’re already heavily invested in Amazon Echo smart speakers around your home, you’ll be able to switch to voice assistant Alexa, which is also included in the TCL C81 too.

TCL has also seen off another pitfall that more affordable TVs often fall into – sound quality. Built-in speakers on flatscreen panels are never going to rival your local multiplex, but manufacturers don’t often prioritise this aspect, presumably because they figure most movie fans will invest in a soundbar for their set-up. Thankfully, TCL has teamed-up with ONKYO to build a 2.1 sound system into the back of the set.

Admittedly, this does make the C81 pretty bulky, which isn’t ideal if you’re looking to wall-mount your telly, but it means you’ll be able to enjoy some pretty immersive sound straight out of the box… and crucially, without needing to spend any more cash on your set-up. The dedicated down-firing bass speaker at the back of the set is particularly impressive.

Even if you’re not a movie buff, this addition will make music streamed to your telly much better.

Of course, if you want to add a soundbar to the mix down the line, Android TV lets you disable the built-in system and revert to HDMI Arc, so that’s not an issue. But even at £750, it’s great to see TCL thinking about an all-in-one solution for viewers. 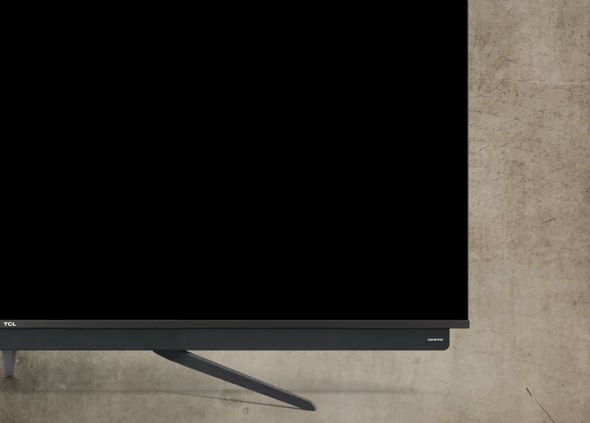 All of this would be meaningless if the picture quality wasn’t very good.

And thankfully, that’s another aspect where the TCL C81 lands on its feet. For those who don’t know, QLED stands for Quantum Light-Emitting Diode. In a nutshell, QLED panels work in the same way as standard LED TVs – meaning there is a backlight built from hundreds or thousands of LEDs that light the individual pixels. QLED improves on standard LED by employing nanoparticles – known as quantum dots – to super-charge the brightness and colour of these individual pixels. The result is more vibrant colours.

With all of these slightly similar initialisms, it can get a little confusing, but it’s important to know that QLED panels aren’t the same as OLED. The latter tend to be much pricier and capable of producing cavernous blacks. That’s because OLED – or Organic Light-Emitting Diode – panels don’t rely on a uniform backlight. Instead, each individual pixel is an LED which can be switched on and off to create colour or total darkness.

The difference between QLED and LED really shows when watching bright, colourful footage, like the latest nature documentary from David Attenborough. Colours are incredibly vibrant — without looking artificial. Support for HDR also means the panel is able to handle extremes of light, like gloomy scenes lit by sunlight from a single window. Without HDR, High Dynamic Range, the areas with of highest contrast can quickly lose detail and become blown-out (if things are bright) or a little muddy (in the gloomier parts of the screen).

It’s worth noting that TCL supports 100Hz refresh rate, which should make fast-paced action, like a tennis or football match, a little clearer on-screen. However, it’s not enough to take full advantage of the latest generation of consoles, Sony PS5 and Xbox Series X, which support gaming at 120Hz. To truly see what your new console is capable of, you’ll need to shell out a little more on a high-refresh rate set. 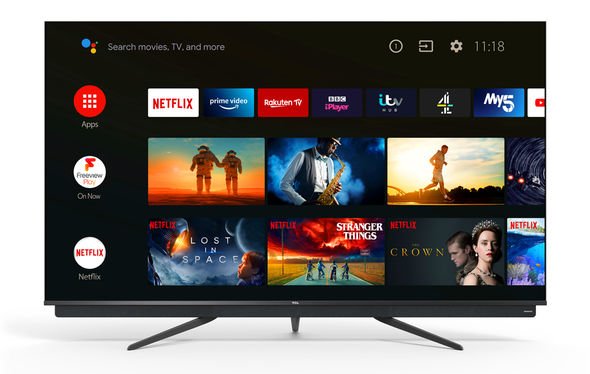 With the C81 Series, TCL offers an affordable QLED panel with a reliable operating system, support for both major smart home assistants out-of-the-box, and some solid sound. Of course, there are some minor quibbles — you’ll need to spend some time tinkering in the settings menu to get the most out of the QLED screen as the presets aren’t the best example of what this screen is truly capable of — but these are the sort of nitpicks you’d expect at this price point. And what you get for the price is truly astonishing.

If you’re looking to upgrade your movie nights-in, haven’t already invested in a sound system, and don’t want to shell-out a four-figure sum, you’ll struggle to find a better option that the TCL C81 Series.