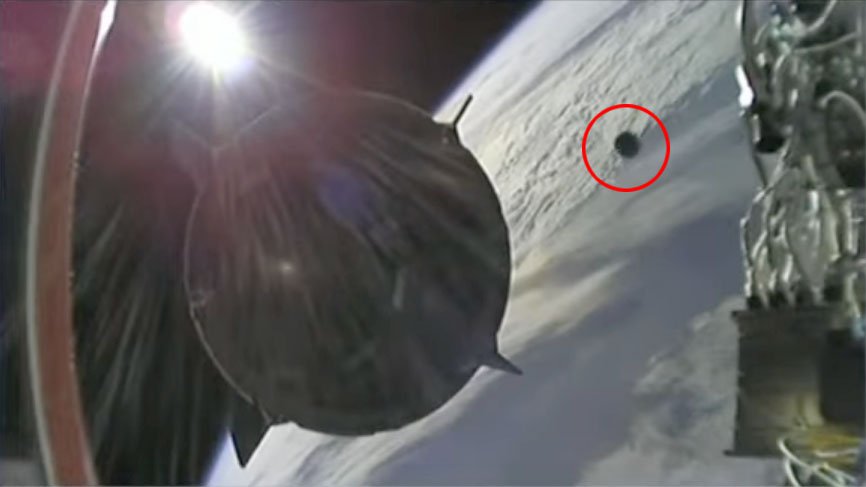 Footage captured during the recent manned SpaceX launch shows the moment the rocket nearly collided with a piece of space debris.

The piece of floating matter flew was captured on camera during the livestream of the journey to dock with the International Space Station (ISS).

It actually came from the rocket itself just 12 minutes into the flight.

The item was a piece of debris from the front capsule that broke off and was propelled to the back of the craft.

In fact, this was the first of two near-misses on the same voyage.

And while the four astronauts on board weren’t bothered by the first – the second did involve a bit of a scare.

Six hours later the astronauts were told to ‘buckle up’ when another object was picked up hurtling towards them.

‘The Nasa/SpaceX team was informed of the possible conjunction by US Space Command,’ Nasa spokesperson Kelly Humphries told Futurism.

‘The object being tracked is classified as ‘unknown.”

There was apparently no time to perform an avoidance maneuver and the astronauts were told to put on their pressurized suits and brace for an impact.

‘The possibility of the conjunction came so close to the closest approach time that there wasn’t time to compute and execute a debris avoidance maneuver with confidence, so the SpaceX team elected to have the crew don their pressure suits out of an abundance of caution,’ Humphries said.

Thankfully, the collision didn’t happen and the astronauts reached the ISS safely.