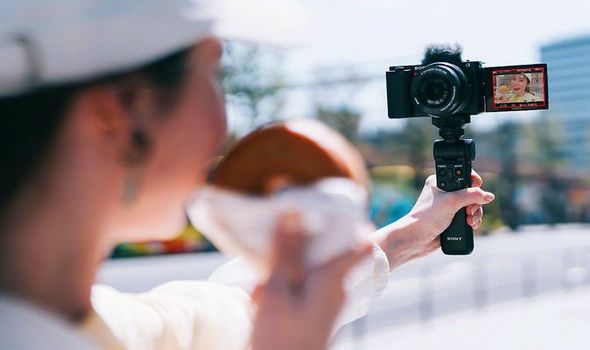 Sony has unveiled a next-generation vlogging camera that combines simple shortcuts to complex video and photo features with the ability to switch between a huge range of lenses. Dubbed Sony ZV-E10, the upgraded camera arrives with a larger 24-megapixel APS-C sensor and electronic image stabilisation.

In a nutshell, Sony ZV-E10 is designed to be the next step-up for those who have outgrown the camera on their smartphone. While smartphone cameras have come a long way – and are more than capable for those looking to start a YouTube channel or other social media account, those looking for greater quality, more flexibility around camera lenses, and better audio could find it with the Sony ZV-E10.

Like the first dedicated vlogging camera from the Japanese technology company, the Sony ZV-1, there are shortcuts to focus and exposure settings. It has a fully articulated touchscreen display, which can be used to manage your settings, and flip around so that you can see through the viewfinder – even when you’re shooting selfies

There’s also a button to kickstart the Portrait Mode – a common setting found on smartphones – that uses software to add a soft bokeh blur behind the subject.

A phase-detect autofocus system has been added to the Sony ZV-E10. It applies to both video and photo modes and should result in much snappier subject tracking, reliable eye, face, and head detect to autofocus on the subject at all time, Sony says.

There’s also a S&Q, which stands for “Slow & Quick”, button that allows you to start recording time-lapse and slow motion footage in-camera at the touch of a button. Those who are accustomed to quickly switching between video, photo and slow-motion modes within the camera app of their smartphone should have no trouble getting their heads around the buttons on the Sony ZV-E10, which mirror all of these functions.

The ability to shoot slow-motion in-camera means you won’t need to worry about spending an age in editing software to achieve the same effect.

The latter is especially important as Sony offers wireless file transfers from the ZV-E10 to your smartphone. With the camera in your rucksack, you can transfer the latest video or photo files to your phone, where they can be shared to social media in a few clicks. Cutting out an extra step to edit the video should save time for influencers on travel trips or on a tight deadline.

When it comes to battery life, Sony says camera owners should expect to be able to shoot for 80 minutes on a charge, or take around 440 photos.

There’s also dedicated microphone and 3.5mm headphone ports found on the Sony ZV-E10 to improve the sound quality of your next video. Sony also throws-in a three-capsule directional microphone with a muff to shield your audience from annoying wind noise whenever you’re shooting outside. It’s also possible to livestream from the Sony ZV-E10 when connecting to a PC or Android 11 smartphone. iOS isn’t available yet, but should be coming soon.