Samsung has announced that its debut folding smartphone, which was originally delayed following durability concerns, will launch in Australia on October 30 for $2999.

The Galaxy Fold's primary selling point is a tablet-sized 7.3-inch OLED that flexes in the middle so the device can fold into a skinny, pocketable shape. The outside of the device features a smaller 4.6-inch display so it can still be used while closed, while special software ensures tasks can be initiated on one screen and carry over to the other. 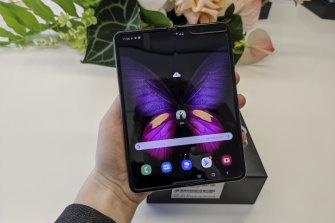 The Samsung Galaxy Fold is designed to be a tablet that can fit in your pocket.Credit:Tim Biggs

At a media event in Sydney, Samsung showed off the improvements and refinements made to the device since its original unveiling, including a redesigned protective covering on the folding screen. There are also caps on the edges of the crease that prevent objects and matter from getting under the screen, increased internal reinforcement and new dual SIM functionality that makes use of eSIM technology for the first time in a Samsung phone.

The Fold is expected to be available only in limited quantities, and Samsung says it will be sold exclusively in stores, not over the internet. Customers who have previously expressed their interest in the device will be contacted with invitations to purchase a device.

The Korean phone-maker has claimed the Fold is the introduction of a new category that it will support with new devices going forward. As phone screens are beginning to exceed six inches, the Fold is designed to facilitate an even larger screen in a form that can fit in your pocket.

Other than the folding display, the phone features six cameras, large dual batteries, wireless charging, reverse charging and a side-mounted fingerprint scanner. It also has an unusually large 12GB of RAM to facilitate the running of multiple apps simultaneously across the large screen. The phone is powered by the Snapdragon 855 processor, not an Exynos as is usually included in Samsung's phones outside of the US. A 5G variant has not been announced for Australia. 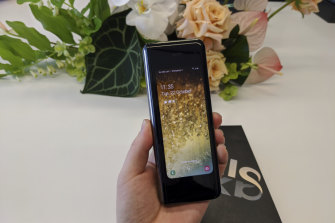 The smaller front screen allows you to check notifications or use apps without opening the device.Credit:Tim Biggs

The Galaxy Fold was originally slated for release in certain regions on April 26, but the launch was cancelled after some reviewers found their units broke easily, had malfunctioning hinge mechanisms or lacked protection against objects working their way inside through a gap in the screen.

The phone eventually made it to market in South Korea in early September, and then the US, albeit with a litany of warnings affixed. A Samsung spokesperson said that, in the event of an Australian Fold purchaser requiring a screen replacement, special arrangements would be made to keep the cost down. 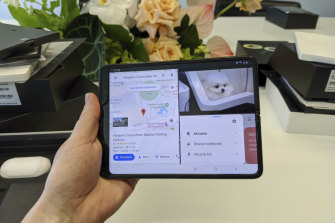 As a tablet the Fold can be used in either orientation, and fits three apps on the screen neatly.Credit:Tim Biggs

In a brief hands on at Samsung's event, the Fold felt solid and refined. It's not difficult to open, but requires deliberate force thanks to a magnetic clasp and resistance built into the screen. Once open it locks into a flat position and can be used like a tablet. It feels very unlikely to open or close accidentally, even while using as a tablet in one hand.

A primary camera array made up of three lenses sits on the back of the device and can be used with the phone open or closed, while two forward-facing setups allow for selfies in either position too. The phone's software seamlessly extended apps from the front screen to the larger inner screen, although only certain supported apps will be able to go back the other way. Support for running up to three apps at once is also limited to software that supports the feature.