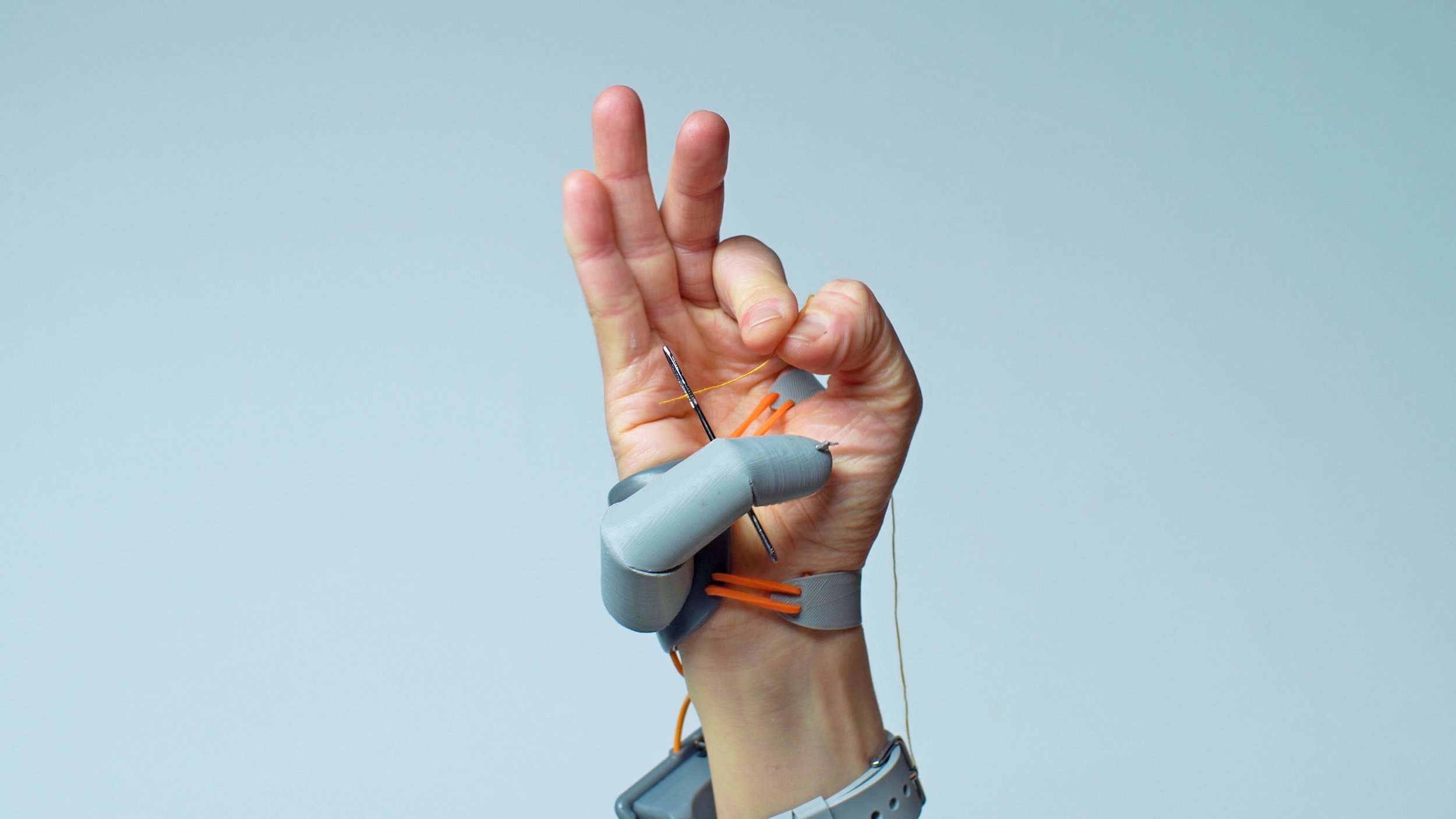 If you’ve ever felt that two thumbs isn’t enough, then science might have the answer.

Scientists at University College London have invented an additional robotic thumb that attaches below your little finger – and it’s controlled with your toes.

In a trial, 36 people were given the right-handed 3D printed device to see how the brain adapts to the new appendage.

The device, which communicates wirelessly using sensors on a user’s big toes, can move in different directions and clench its grip – all from wiggling the toes in certain directions.

But scientists have warned that prolonged use might come at the cost of user’s brains being less certain how hands work.

Participants in the study trialled the artificial thumbs for five days, as lead researcher Danielle Clode encouraged third thumb owners to use the tools both in the lab and the wider world.

‘Our study shows that people can quickly learn to control an augmentation device and use it for their benefit, without overthinking,’ said Clode.

‘We saw that while using the third thumb, people changed their natural hand movements, and they also reported that the robotic thumb felt like part of their own body.’

The extra thumb is sensitive enough to cradle a cup of coffee, while the human hand’s forefingers stirred it with a spoon – other participants used the extra thumb for flick through pages of a book they were holding in the same hand.

Researchers hope that having a permanent third thumb could eventually let people carry more objects than usual, open things with one hand or become even more proficient at musical instruments.

But professional musicians were excluded from the study, as their brains could already have different hand representations after years of musical training.

‘One of the goals of the training was to push the participants about what was possible and train them in unique new ways of handling objects,’ said Clode.

There weren’t just short tests, either – the average user wore the thumb for under three hours a day.

As well as using the thumbs, researchers gave participants an MRI scan to see which changes, if any, the brain underwent while using the thumb technology.

‘Technology is advancing, but no one is talking about whether our brain can deal with that,’ said team member Paulina Kieliba.

However, these changes only stuck around for a week or so, as a follow-up brain scan revealed the changes had failed to bed in.

Researchers with UCL’s Plasticity Lab, who conducted the study, now plan to look at the effects of prosthetic appendages on children and teenagers, and how they might improve the lives of adults with missing fingers.

‘Body augmentation could one day be valuable to society in numerous ways, such as enabling a surgeon to get by without an assistant, or a factory worker to work more efficiently,’ said Kieliba.

‘This line of work could revolutionise the concept of prosthetics, and it could help someone who permanently or temporarily can only use one hand, to do everything with that hand.

‘But to get there, we need to continue researching the complicated, interdisciplinary questions of how these devices interact with our brains.’