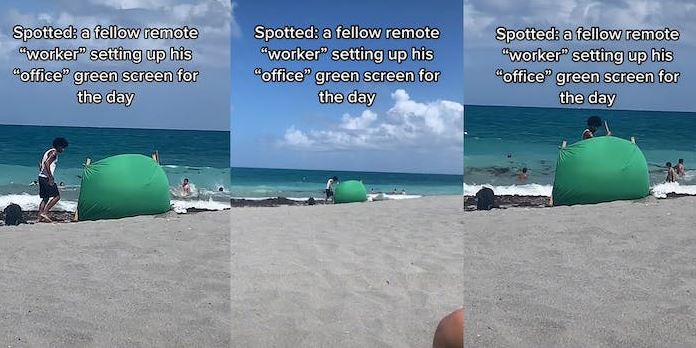 TikTok users are clashing over a viral video that allegedly shows a remote worker setting up a green screen at the beach.

Posted by user averyncmm, the short clip shows a man walking by a sheet of green fabric attached to a makeshift wooden frame.

Averyncmm captions the video, ‘Spotted: a fellow remote ‘worker’ setting up his ‘office’ green screen for the day.’

Although it’s unclear exactly what the man, who is some distance from the camera and can be seen apparently sweeping something with a broom, is doing, the clip has still managed to spark debate over what’s acceptable when it comes to home working.

Remote working became the norm for many office workers at the start of the pandemic, when countries around the world told employees to work from home.

Even as economies have reopened, many staff have continued to work remotely at least part of the time.

Some users praised the mystery beachgoer’s set-up, arguing employers shouldn’t mind where staff work, so long as they get the job done.

User Milly Rosario wrote: ‘The work gets done, right? Nothing to see here but a productive and proactive employee.’

Christopher Cuccinel added: ‘I think businesses and employees are more productive when everyone is happy lol’

Other users said it was ironic that a worker might set up a fake office at the beach, given many employees use fake Zoom backgrounds that make it look like they’re sitting on a tropical island.

Another user suggested a green-screen setting was a bit much. ‘No need for green screen when zoom got virtual backgrounds,’ they wrote.

But others criticised the set-up, suggesting a beach was an unpleasant place to work. One commented: ‘Idc what you say that’s not more comfortable than working from an office chair with back support in the AC.’

Other users expressed regret they couldn’t do their jobs from the beach. One user wrote: ‘Where are you people finding remote jobs that pay decent wages? 😫 so sick of sitting in traffic and waking up before the sun.’

Some pointed out ther practical problems with setting up shop at the beach. ‘But how do y’all keep your laptops charged??’

‘I wish I could get Wi-Fi at the beach,’ added Kaylee Collins.

Earlier this year, jobs site Indeed revealed searches for remote work had grown from a tiny 0.23% of searches in December 2019 to 2.4% in December 2021.

Although that’s a small proportion overall, the company said some sectors were recruiting significant numbers of remote workers. The sector highest proportion of remote ads was software development, which advertised 44% of jobs as remote.