Tim Sweeney, the chief executive of $US18 billion ($23.5 billion) Epic Games, tapped out an email to a contact at Microsoft to let them in on a “confidential” project.

By August 13, Epic triggered a secret switch that it had hidden inside its Fortnite game on Apple iPhones In the early hours of the morning, it moved Fortnite’s in-game payments to a system that wasn’t controlled by Apple.

In response, Apple deleted Fortnite from its App Store, kickstarting a bitter public relations and legal battle that is still being waged in courtrooms around the world. 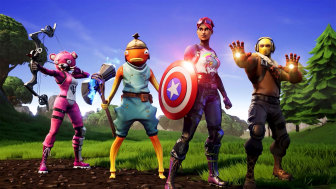 Today, Fortnite, the battle royale game loved by 350 million players, has become a pawn in a global tussle between developers and Big Tech.

The row centres on Apple’s App Store fees. Apple controls what apps can be installed on iPhones and iPads through its Store, and takes a fee of up to 30 per cent on purchases made within those apps, while Google has similar restrictions for Android phones.

Epic is demanding injunctions that would allow rival app stores on smartphones and let app developers use alternative payment methods.

If Epic prevails in court, Apple could be forced to amend its policy of taking a cut of in-app payments in favour of the games-maker, causing it to lose out on hundreds of billions of pounds of future revenues.

Apple has launched a legal offensive against Epic Games, suing the company for attempting to bypass the Apple payment system. In one court filing, Apple said that when Epic used its own payment system, violating Apple’s App Store rules, the company was stealing from them.

The outcome of the case could also be used as evidence in a raft of competition investigations that Apple is facing over its App Store around the world.

Thomas Hӧppner, a lawyer at the firm Hausfeld who has advised on competition probes into Big Tech, says: “While at first glance it may look like a battle between two giants in their field, Apple’s conduct equally affects thousands of much smaller app developers that are even more vulnerable than Epic.”

On Thursday, both Apple and Epic filed hundreds of pages of claims to a California court, providing the clearest picture yet of the two-year operation by the Fortnite-maker to challenge the world’s most valuable company.

Codenamed Project Liberty, Apple claims the scheme had been in the works since 2019 in an effort by Epic Games to eke more revenues from Fortnite, which had seen falling user engagement.

To do this, Epic, which is backed by China’s Tencent, planned to apply pressure on Apple to reduce its App Store fees from 30 per cent, allowing Epic to collect more fees of its own using its own payment mechanism and games store.

The App Store is part of Apple’s services division, which last year made $US54 billion.

Epic began formulating a plan to go after the app stores of Apple and Google, with Sweeney writing in an internal memo “it’s going to be fun!“.

It hired top law firm Cravath, Swaine and Moore and in April 2020 as Sweeney ordered the creation of a 200-strong “Special Project Team” to work on Project Liberty.

Sweeney’s plan began to come to fruition by June. In an email to Apple, his team demanded a “special deal”, filings allege, that would see Epic’s fees cut.

Apple refused on July 10. Epic responded by accusing Apple of a “self-righteous and self-serving screed”. But cogs were already in motion to launch Project Liberty.

On July 27, Sweeney briefed his board on Epic’s “Battle Plan” in a presentation called “Epic’s War Against Mobile Platform Fees”. Epic wanted to form a coalition of like-minded developers to protest against Apple’s 30 per cent fees.

It formulated its plan to roll out an update that would allow players to buy discounted “V-Bucks”, a form of in-game currency, through its own payment method in a deal called the “Fortnite Mega Drop”.

Apple reacted by immediately barring Epic from its App Store for breaching its guidelines. Epic responded with a PR blitz including a 1984-style video comparing Tim Cook to Big Brother and introducing an Apple-headed character to its game called the “Tart Tycoon”.

It also paid a PR firm $US300,000 to create a campaign focusing on how users lost out thanks to Big Tech’s app stores.

In Apple’s filings, it accuses Epic of a two-year campaign “to portray Apple as the ‘bad guy’ so it can revive flagging interest in Fortnite”. Apple says its store ultimately helps keep users secure.

It argues the App Store is not a monopoly – demonstrated by the fact Fornite players can keep playing across other PC, mobile and games consoles. It also argues it is entitled to ask for a fee from developers, since it maintains and owns the App Store. It adds that Fortnite users can also buy in-game currency on a PC or a console, then use it on their iPhones.

It claims Epic benefited from the arrangement and made $US700 million in Fortnite revenues from Apple’s devices.

‘Like bringing a butter knife to a gun fight’

Epic has a radically different version of events. In its filing it portrays Apple as an ineffectual gatekeeper over apps, suggesting that Apple’s claim that it retains control over which apps are allowed in the App Store for security reasons is overblown and so its 30 per cent cut of payments is unfair.

The Apple team that sifts through apps to check for scams “was more like the pretty lady who greets you with a lei at the Hawaiian airport than the drug sniffing dog,” an Apple employee claimed, according to Epic’s filing. Another employee allegedly said app reviews were like “bringing a plastic butter knife to a gun fight.”

In its own filing, Apple says it has a “robust” review process for suspicious apps and rejects up to 40 per cent of apps submitted to its app store.

Epic paints Apple as being desperate to keep customers using iPhones by controlling which software is available, with the business even deciding not to develop a version of iMessage for Android smartphones.

Phil Schiller, an Apple executive who ran its App store, also said that “moving iMessage to Android will hurt us more than help us.” Epic’s suggestion is clear: Apple uses its control over software to keep customers and developers tied to iPhones.

Epic is hoping to use the legal dispute to force Apple to open up its iPhones, allowing companies like Epic to run rival app stores to release apps and take their own cut of payments. Apple’s legal filing points out Epic already has such a store, which lost $US273 million in 2020.

Success for Epic could have broader implications than just who ends up taking a cut of Fortnite, however.

Through its grand plan, Epic has escalated its own grievance with Apple into a globe-spanning battle over the future of Big Tech’s App Stores. It has signed up publishers and music streaming services including Spotify to its efforts.

Even if Apple wins, some legal experts believe that there would still be a case to answer in Europe due to differences in competition law. “Even if the US Court decides in favour of Apple, this would not mean that Apple would also be off the hook in Europe,” says Hӧppner, of the law firm Hausfeld.

The trial in California, which kicks off on May 3, may just be the first round in this battle royale.

Most Viewed in Business