When the white nationalist Tim Gionet stormed the U.S. Capitol with a mob of Trump loyalists on Wednesday, entering congressional offices and putting his feet up on lawmakers’ furniture, he also chatted live with more than 16,000 of his fans.

Using a livestreaming site called Dlive, Mr. Gionet — known by the online alias “Baked Alaska” — broadcast his actions inside the Capitol. Through Dlive, his fans then sent him messages telling him where to go to avoid capture by the police. They also tipped him with “lemons,” a Dlive currency that can be converted into real money, through which Mr. Gionet made more than $2,000 on Wednesday, according to online estimates.

Mr. Gionet operates one of at least nine channels that used Dlive to share real-time footage from the front lines of Wednesday’s rampage. He and hundreds of other members of the far right have turned to the platform after mainstream services removed them. In 2017, Mr. Gionet was kicked off Twitter; last year, he was barred from YouTube.

Dlive’s increasing popularity shows how an online exodus of far-right figures on Facebook, Twitter and YouTube since the November election has now moved beyond alternative social-networking, news and video sites like Rumble, Gab and Parler. Livestreaming is also benefiting — especially as a way to communicate live with followers and to earn money by spreading hate.

That shift gained further momentum this week after Facebook, Twitter, Instagram, Snapchat and Twitch limited President Trump’s accounts for inciting Wednesday’s violence and clamped down on other right-wing personalities. On Friday, Dan Bongino, a right-wing podcaster, tweeted that he was leaving Twitter for good because it was an “anti-American platform” and that he would be on Parler instead.

Dlive said in a statement on Friday that it had “zero tolerance toward any forms of violence and illegal activities.” It added that it had suspended, forced offline or limited 10 accounts and deleted 100 broadcasts. Dlive also said it was freezing the earnings of streamers who had broken into the Capitol. 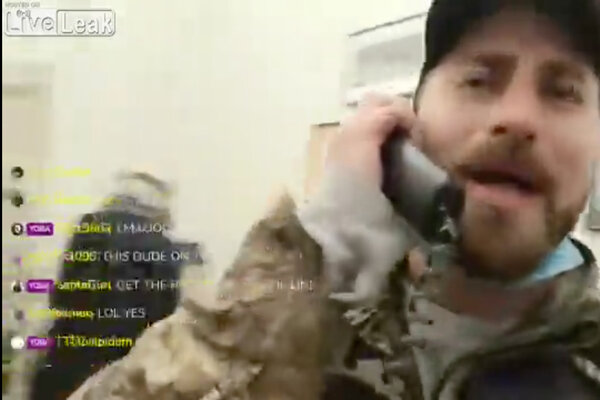 But streamers and misinformation researchers said Dlive’s emergence as a haven for white nationalists was unlikely to change. That’s because the site, which was founded in 2017 and is similar to Twitch, the Amazon-owned platform where video gamers livestream their play, helps streamers make tens of thousands of dollars and benefits by taking a cut of that revenue.

Jo-dell Brodhagen, a Dlive streamer and comedian from Ontario, said she had increasingly seen the site cater to far-right members by quickly addressing their questions and complaints while silencing longtime streamers who raised questions about their racist statements. She said Dlive favored white supremacists because it saw “the numbers and the money that’s being spent on these streamers.” She said she planned to leave the site.

Dlive’s growth has been stark, analysts said. The site reported five million active users in April 2019. On Wednesday, more than 150,000 people watched Dlive streams at the same time, one of the site’s busiest days ever, and more than 95 percent of those views went to the far-right streamers, according to Genevieve Oh, a livestreaming analyst.

Dlive was started by Charles Wayn and Cole Chen, young entrepreneurs who studied at the University of California, Berkeley. Mr. Wayn leads the company; Mr. Chen left it “a long time ago,” said Dlive, which is based in Silicon Valley.

The site was built on so-called blockchain technology created by another start-up, Lino, which raised $20 million from investors in 2018. Dlive initially positioned itself as a video game streaming platform that would not take a cut of its streamers’ incomes, as Twitch and others do. That policy changed this year.

In April 2019, Dlive scored a top-tier streamer when Felix Kjellberg, a YouTube star better known as PewDiePie, said he would stream his play on Dlive. (He returned to YouTube last year.)

But by late 2019, Dlive was “on its last legs,” according to a longtime streamer, Nikola Jovanovic. That was when BitTorrent, the peer-to-peer file sharing service, stepped in to buy Dlive. BitTorrent’s parent company, Tron, is owned by Justin Sun, a Chinese cryptocurrency multimillionaire.

By then, far-right provocateurs had started joining Dlive, drawn by its loose enforcement of prohibited speech, which essentially allowed streamers to say whatever they wanted.

In 2019, for instance, Nick Fuentes, who attended the white supremacist rally in Charlottesville, Va., and has argued for “Christian nationalism,” was barred from Twitch and started streaming on Dlive. Reddit and YouTube later barred him for violating hate-speech policies.

Mr. Fuentes’s first Dlive stream attracted just a few hundred viewers, but his audience has grown over time. Last year, some of his Dlive streams had more than 50,000 viewers at the same time, according to data compiled by Ms. Oh.

Dlive has struggled with the right-wing influx. In messages obtained by The New York Times, Mr. Wayn told employees last year that he wanted to suspend some of the white supremacists and neo-Nazis who streamed on his site. But, he added, “if today we ban everyone controversial on DLive, the difficulties we will encounter on the growth will be 10x more than having them.”

The strategy, Mr. Wayn said, was to “tolerate” them while amassing more legitimate video game players who would eventually “dilute” the right-wing community.

Dlive said in a statement on Friday that interpreting Mr. Wayn’s comments as “trying to grow with a tolerance of violence and illegal activities is misleading.”

A cursory glance at DLive shows an innocuous site. On Thursday night, 33 viewers watched a man livestream a sunset and 144 discussed cryptocurrency.

But when a user changes the settings to allow “x-tagged” content to be viewed, streams with thousands of viewers discussing the riot at the Capitol quickly dominate the home page. In his stream on Thursday night, Mr. Fuentes, who had attracted 20,000 viewers, called Wednesday’s events “a flicker of hope” that “showed what is possible.”

Neither Mr. Gionet nor Mr. Fuentes responded to requests for comment.

“Everything about this platform is fake,” said Mr. Jovanovic, 34, the longtime streamer. “It’s like a cardboard building that shows Disneyland. As soon as you press on it, it’s death and carnage.”

Mr. Jovanovic said he was suspended from the site in December after being accused of harassing a fellow streamer — an accusation he denies — and later permanently barred after complaining about Dlive on Twitter.

Other far-right users who joined Dlive last year include at least half a dozen believers of the QAnon conspiracy theory, some of whom were barred from YouTube when the platform cracked down on QAnon accounts in October.

On Wednesday, apart from Mr. Gionet, far-right-affiliated channels called Woozuh, Gloomtube and Loulz also streamed from the Capitol attack, as did an account called Murder the Media, which is affiliated with the Proud Boys, a far-right, neofascist organization. The words “Murder the Media” were scrawled on a Capitol doorway.

“Are they going to arrest us?” a Dlive streamer named Zykotik wondered aloud while discussing his plans to ignore the citywide curfew in Washington. A man who identified himself as Clifford approached in Zykotik’s stream. “Are you Dliving?” Zykotik asked. The man said he was.

Because Parler, Gab and other sites don’t offer ways to make money, streaming on Dlive has become a key piece of many far-right activists’ strategies, said Megan Squire, a professor of computer science at Elon University.

“Most donations are small amounts of money, but some donors give very, very large amounts,” she said. “Some users are giving $10,000 to $20,000 a month to streamers on Dlive.” Top streamers on the platform earned six-figure incomes in 2019, according to Ms. Squire’s research.

Shannon McGregor, a social media scholar and professor at the University of North Carolina, Chapel Hill, said Dlive’s growth was another step in the “fracture of the social media ecosystem” that could make it harder to follow the movements of extremists.

“This makes it way harder for people to track — for journalists, for researchers, for people like the F.B.I.,” she said. “Because they’re migrating from site to site, it’s sort of like they’re playing Whac-A-Mole.”