It has become common wisdom that too much time spent on smartphones and social media is responsible for a recent spike in anxiety, depression and other mental health problems, especially among teenagers.

But a growing number of academic researchers have produced studies that suggest the common wisdom is wrong. 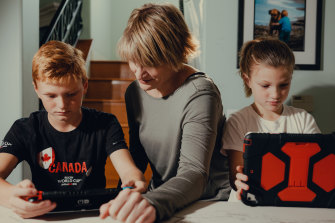 Candice Odgers, a professor at the University of California, says research doesn’t justify our fear around kids and screen time.Credit:Rozette Rago / The New York Times

The latest research, published by two psychology professors, combs through about 40 studies that have examined the link between social media use and both depression and anxiety among adolescents. That link, according to the professors, is small and inconsistent.

"There doesn't seem to be an evidence base that would explain the level of panic and consternation around these issues," said Candice L. Odgers, a professor at the University of California and the lead author of the paper, which was published in the Journal of Child Psychology and Psychiatry.

The debate over the harm we — and especially our children — are doing to ourselves by staring into phones is generally predicated on the assumption that the machines we carry in our pockets pose a significant risk to our mental health.

The World Health Organisation said last year that infants under a year old should not be exposed to electronic screens and that children between the ages of 2 and 4 should not have more than an hour of "sedentary screen time" each day.

Even technologists and Silicon Valley executives have made a point of keeping the devices and the software they develop away from their own children.

But some researchers question whether those fears are justified. They are not arguing that intensive use of phones does not matter. Children who are on their phones too much can miss out on other valuable activities, like exercise. And research has shown that excessive phone use can exacerbate the problems of certain vulnerable groups, like children with mental health issues.

They are, however, challenging the widespread belief that screens are responsible for broad societal problems like the rising rates of anxiety and sleep deprivation among teenagers. In most cases, they say, the phone is just a mirror that reveals the problems a child would have even without the phone. 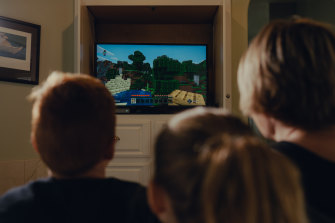 Odgers has begun joining in with her kids’ screen time.Credit:Rozette Rago / The New York Times

The researchers worry that the focus on keeping children away from screens is making it hard to have more productive conversations about topics like how to make phones more useful for low-income people, who tend to use them more, or how to protect the privacy of teenagers who share their lives online.

"Many of the people who are terrifying kids about screens, they have hit a vein of attention from society and they are going to ride that. But that is super bad for society," said Andrew Przybylski, director of research at the Oxford Internet Institute, who has published several studies on the topic.

The new article by Odgers and Michaeline R. Jensen, of the University of North Carolina, comes just a few weeks after the publication of an analysis by Amy Orben, a researcher at the University of Cambridge, and shortly before the planned publication of similar work from Jeff Hancock, the founder of the Stanford Social Media Lab. Both reached similar conclusions.

"The current dominant discourse around phones and well-being is a lot of hype and a lot of fear," Hancock said. "But if you compare the effects of your phone to eating properly or sleeping or smoking, it’s not even close."

Hancock’s analysis of about 226 studies on the well-being of phone users concluded that "when you look at all these different kinds of well-being, the net effect size is essentially zero."

The debate about screen time and mental health goes back to the early days of the iPhone. In 2011, the American Academy of Pediatrics published a widely cited paper that warned doctors about "Facebook depression."

Concern about the connection between smartphones and mental health has also been fed by high-profile works like a 2017 article in The Atlantic — and a related book — by psychologist Jean Twenge, who argued that a recent rise in suicide and depression among teenagers was linked to the arrival of smartphones.

In her article, "Have Smartphones Ruined a Generation?," Twenge attributed the sudden rise in reports of anxiety, depression and suicide from teens after 2012 to the spread of smartphones and social media.

Twenge's critics argue that her work found a correlation between the appearance of smartphones and a real rise in reports of mental health issues, but that it did not establish that phones were the cause.

It could, researchers argue, just as easily be that the rise in depression led teenagers to excessive phone use at a time when there were many other potential explanations for depression and anxiety. What's more, anxiety and suicide rates appear not to have risen in large parts of Europe, where phones have also become more prevalent.

"Why else might American kids be anxious other than telephones?" Hancock said. "How about climate change? How about income inequality? How about more student debt? There are so many big giant structural issues that have a huge impact on us but are invisible and that we aren’t looking at."

Twenge remains committed to her position, and she points to several more recent studies by other academics who have found a specific link between social media use and poor mental health. One paper found that when a group of college students gave up social media for three weeks, their sense of loneliness and depression declined.

Odgers, Hancock and Przybylski said they had not taken any funding from the tech industry, and all have been outspoken critics of the industry on issues other than mental health, such as privacy and the companies' lack of transparency.

Odgers added that she was not surprised that people had a hard time accepting her findings. Her own mother questioned her research after one of her grandsons stopped talking to her during the long drives she used to enjoy. But children tuning out their elders when they become teenagers is hardly a new trend, she said.

She also reminded her mother that their conversation was taking place during a video chat with Odgers' son; the kind of intergenerational connection that was impossible before smartphones.

Odgers acknowledged that she was reluctant to give her two children more time on their iPads. But she recently tried playing the video game Fortnite with her son and found it an unexpectedly positive experience.

"It's hard work because it’s not the environment we were raised in," she said. "It can be a little scary at times. I have those moments, too."