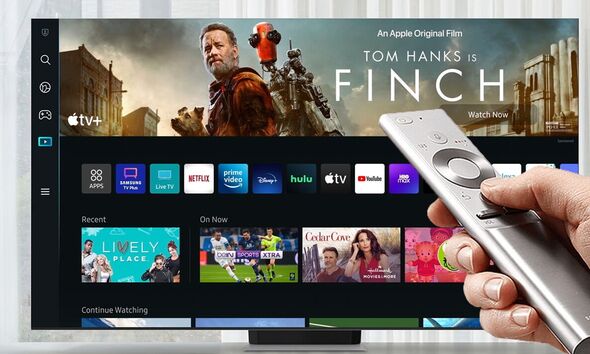 If you treated yourself to a new TV for Christmas or purchased one in the January sales then there’s good news. The Korean technology firm has announced that it’s handing out some freebies which include premium content such as access to movies, music and even fitness classes on the big screen.

Samsung is offering a whopping £1,000 off some 8K TVs plus a further £600 cashback when you trade in your old telly.

As part of the deal, you’ll get three months of access to Spotify, five movie rentals via Rakuten TV, three months of NextUp comedy plus 8K content to watch via The Explorers. For those that have pilled on the pounds over the festive break, there’s also a four-month subscription to FiiT.

This premium service, which usually costs £7.99 per month, features workouts you can do in your living room including strength, yoga, circuit and heart-pumping HiiT classes.

The total TV, music and fitness bundle is worth a whopping £160 and is definitely not something that should be missed. Samsung says the deal is available to anyone who purchased a TV after September 1 2022.

If that’s you then claiming the content is easy.

All you need to do is open the Samsung Promotion app on your TV, then connect your Samsung Account to unlock the app subscriptions. Finally, click on ‘Get it now’ to view each app’s unique voucher code and follow the instructions on the screen.

If you’ve been thinking of upgrading your Samsung TV then there’s more good news as the deal is available until March 30 so there’s still time to take advantage.

Samsung is also offering a swathe of other discounts on its televisions which include up to £1,000 off its premium Neo QLED screens, £200 reductions on QLED tellies and £400 off its stunning The Frame displays which look just like a picture hanging on your walls.

Anyone happy to trade in their current TV can also get £600 off something new with Samsung even collecting the ageing gogglebox when they drop off the upgrade.

You can find all of these deals from Samsung here.

The only word of warning is that the Korean technology giant has just announced the launch of its next generation of TVs which will arrive in stores later this year.

Samsung is promising that its latest 2023 Neo QLED TVs feature an advanced Neural Quantum Processor which uses clever AI to upscale content that might not have been shot in glorious 8K quality. That means everything you watch should appear sharper and more pixel-packed.

This is all performed on a scene-by-scene basis with Samsung promising that it makes SDR content look brighter and livelier.

“In 2023, we are pushing boundaries of innovation to offer consumers more than just premium picture quality, but a holistic, premium device experience tailored to what they need and want out of their connected home,” said Cheolgi Kim, EVP of Visual Display Business at Samsung Electronics. “With SmartThings, our advanced technology is seamless and intuitive, which can make life more accessible and enjoyable everyday.”