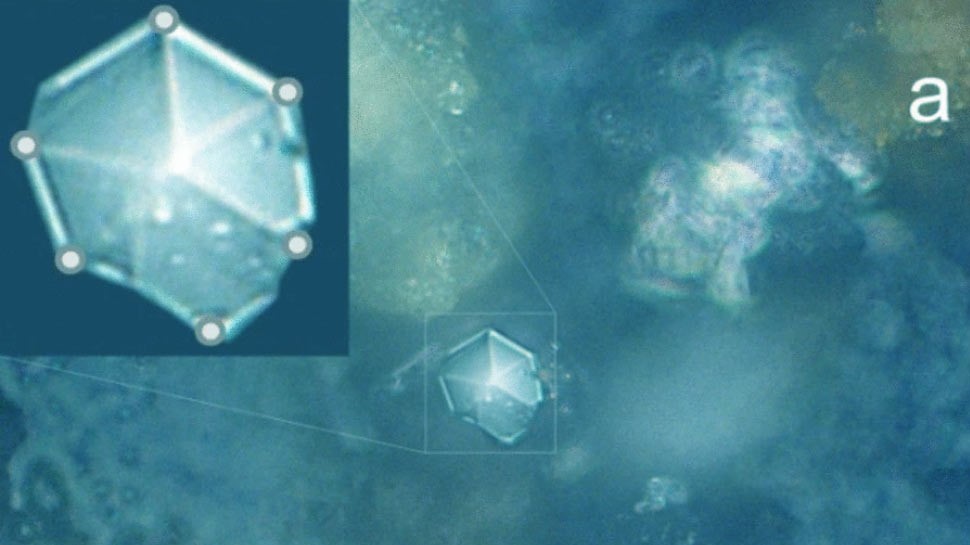 Almost a decade ago, a meteor caused chaos in the Ural mountains region of Russia.

Exploding in the skies above the city of Chelyabinsk, the space rock sent meteorites raining down on the region below.

The explosion also caused a powerful shockwave that shattered windows and collapsed roofs, injuring an estimated 1,500 people. All in all, it’s thought to have caused $33,000,000 of damage.

For scientists, it also served as a ‘wake-up call’ to better study the space rocks that can cause such calamity ⁠— and worse.

Material collected in the aftermath of the explosion is still revealing new secrets.

Scientists have now discovered a unique carbon crystal in dust from the space rock that’s never been seen before. This dust, which normally dissapates in the atmosphere or gets mixed up in soil, was perfectly preserved between layers of snow at the site.

After spotting the first crystal by chance because it happened to be in focus under the microscope’s lens, the team probed the dust for more.

Describing their research in a paper in The European Physical Journal Plus, the team said: ‘Subsequent studies using optical electron microscopy showed that there were a lot of similar objects in the meteoritic dust.’

Actually honing in on the crystals, however, ‘was rather challenging due to their small size (about 10 micrometers) and low phase contrast.’

This is less than the width of a human hair, which can measure anything from 17 to 181 micrometers across.

Further study revealed they were made up of a material called graphite comprised of layers of carbon atoms. These wrapped around a nanocluster at the centre of the crystals.

‘We found that among several possible embryo carbon nanoclusters — buckminsterfullerene (C60) and polyhexacyclooctadecane (-C18H12-) — may be the main suspects, responsible for the formation of the experimentally observed closed shell quasi-spherical and hexagonal rod graphite microcrystals.

It’s possible this unusual structure was formed by the extreme temperatures and pressures experienced during the space rock’s explosion.

The team want to investigate dust from other meteors to find out whether the crystals are typical feature or unique to Chelyabinsk.