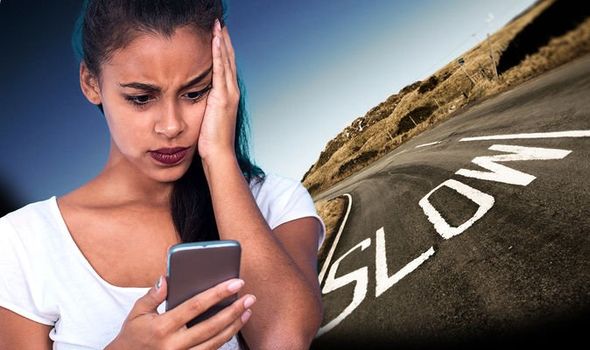 As coronavirus spread across the globe and the UK and mainland Europe went into strict national lockdowns at the start of last year, there were widespread concerns that broadband firms would struggle to cope with the increased traffic as millions worked, studied, socialised and watched shows from home. In response to the concerns, video on-demand services such as Netflix, Disney+, Apple TV+ and YouTube all downgraded their streaming quality in a bid to elevate some strain on our broadband cables. Thankfully, the impact on home broadband speeds was negligible – and we didn’t see any of the black-outs that some experts feared would accompany the “Stay Home” advice from the Prime Minister.

That said, it would be false to say there wasn’t an impact on download speeds last year …it just didn’t happen for the smartphones in our pockets.

SpeedTest.net, one of the most popular free websites to measure your current broadband or mobile data speeds, has published a retrospective report on internet speeds throughout 2020 and it makes for an interesting read. While home broadband networks were able to cope with the extra strain of millions working from home, hosting a Pub Quiz on Zoom, streaming lessons from their teacher, or binge-watching Tiger King on Netflix, mobile download speeds took a hit.

According to data analysed from SpeedTest.net, the median download speed over mobile networks, including 3G, 4G and 5G, across G20 counties dropped during 2020. Australia, Canada, France, India, Italy, Saudi Arabia, South Korea, Spain and Turkey saw consistent month-on-month declines, the data shows. Meanwhile, the United Kingdom saw decreases in mobile speeds too, although these were less pronounced than the others in the list above. 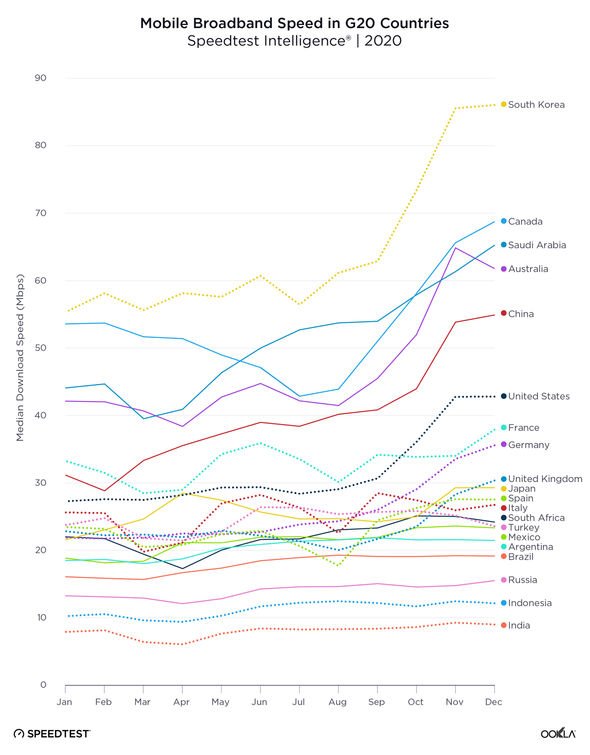 Of course, a number of countries – like the UK – saw a huge increase in the roll-out of next-generation 5G mobile networks throughout last year. These connections, which enable downloads at significantly faster speeds than the average UK broadband connection, could skew the figures. To mitigate against that, the team at SpeedTest.net simplified its research to include only median speeds, which are less subject to being skewed by especially fast 5G tests.

It’s a little unclear what caused the dip in speeds. Logically, as more of us spent time at home – there should’ve been less traffic on mobile networks, and as a result, speeds should’ve improved.

However, those who don’t have access to a broadband connection – or those whose home internet isn’t fast enough for working from home or remote-learning – were forced to rely on 4G speeds to stay connected during the pandemic. In fact, so many children are unable to rely on a strong Wi-Fi signal at home that the UK Government is working with carriers to make mobile connections free to enable them to stream lessons, download documents, and upload homework.

It’s possible these data-heavy tasks caused some of the slowdown reported by SpeedTest.net.

Head of Content for Ookla, the firm behind the free-to-use SpeedTest.net, Isla McKetta concluded: “We are impressed, on the whole, with how well the internet held up to the massive scale of increased use during the past year. Of course, month-by-month, country-level views are averages that might not reveal problems with specific mobile operators or internet service providers on individual days. If you want to assess how your internet connection is performing right now, take a Speedtest.”

The news comes as Prime Minister Boris Johnson quietly walked back his election pledge to bring gigabit-capable broadband connections to every home in the UK by 2025. This promise, which was a key part of the “levelling up” agenda, was designed to ensure every home was future-proofed with 1,000Mbps connections, which will become increasingly important as 8K video quality, remote working, and virtual reality become more commonplace. The current average UK broadband speed is a mere 64Mbps.