There was something magical about the winter of 2016. It’s not just that we could still hug people and gather in groups without second-guessing ourselves, but there was a special feeling in the air – that feeling of camaraderie sparked by everyone playing Pokemon Go. It was really the first location-based augmented reality (AR) game to take off and get people walking around their local area to discover places they had never noticed before.

Although the Pokemon Go player base has grown significantly in the past five years, it’s rare to get that same magic feeling. That’s mostly because no one would consider sprinting to catch a rare water Pokemon anymore, and most players spend far, far less time in the game than when it was first released. 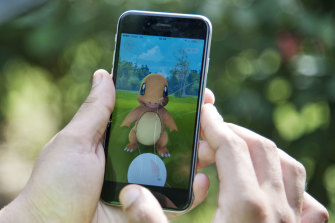 Pokemon Go had everyone out and about chasing mythical monsters in 2016. Credit:AP

But over the weekend, I experienced that magical feeling again. I went out and explored this city I’ve lived in for most of my life with new eyes, and while doing so, felt the city come alive again in ways I didn’t know I missed.

Back in 2016, a good AR game really needed the might of Pokemon Go developer Niantic and parent company Google behind it to be good. The technology is now more accessible and there is a wave of indie developers who are creating AR games and apps that allow you to go out and discover Melbourne in new ways.

One of those games, which launched on the weekend, is Eastern Market Murder, which follows the true story of a phrenologist – someone who measures the bumps on a person’s skull to their predict mental traits – who murdered the husband of a fortune teller in Melbourne’s Eastern Market in 1899.

While the game can technically be played from anywhere in the world, it’s best when played as intended: following the in-game map to walk around the real-world locations of key moments in the crime and investigation to use your phone as a window into the past. 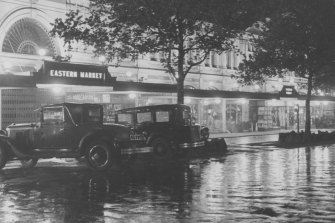 Melbourne’s Eastern Market on the corner of Exhibition Street on a wet night.

For those who aren’t familiar with AR and VR (virtual reality), VR is when you wear goggles to be transported to another world and completely block out this one. AR is when you use your phone’s camera and screen to make it appear as though a dinosaur, or 19th-century police officer, is in your living room to make you feel as though the game is coming alive in your world.

There are heaps of AR apps showing you different angles on Melbourne as it is now, but the beauty of games like Eastern Market Murder and another local AR game, Misadventure In Little Lon, is that they give you insights into Melbourne’s long-forgotten past while also encouraging you to discover its present.

For example, I had no idea there was once such a huge market precinct that specialised in fortune-telling and phrenology up the Spring Street end of Little Collins, and I also had no idea that there’s currently such a good coffee shop there now (though, I should have guessed). 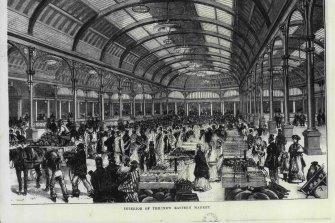 The Eastern Market was a favourite – and colourful – meeting place in the 1880s.

Anything that gives you a new perspective on a familiar place is valuable, and AR is so accessible (it sounds complicated, but any good AR game will walk you through what you need to do – or you can just ask a nearby young person) it opens up incredible opportunities for exploration.

Seeing so many groups of people wandering about trying to get justice for a long dead man called Frank honestly brought a tear to my eye. After seeing the city completely deserted for so many months last year, seeing so many diverse groups of people talking and laughing together truly showed the power of games in bringing our city back to life.

Alice Clarke is an award-winning freelance journalist, producer and presenter.