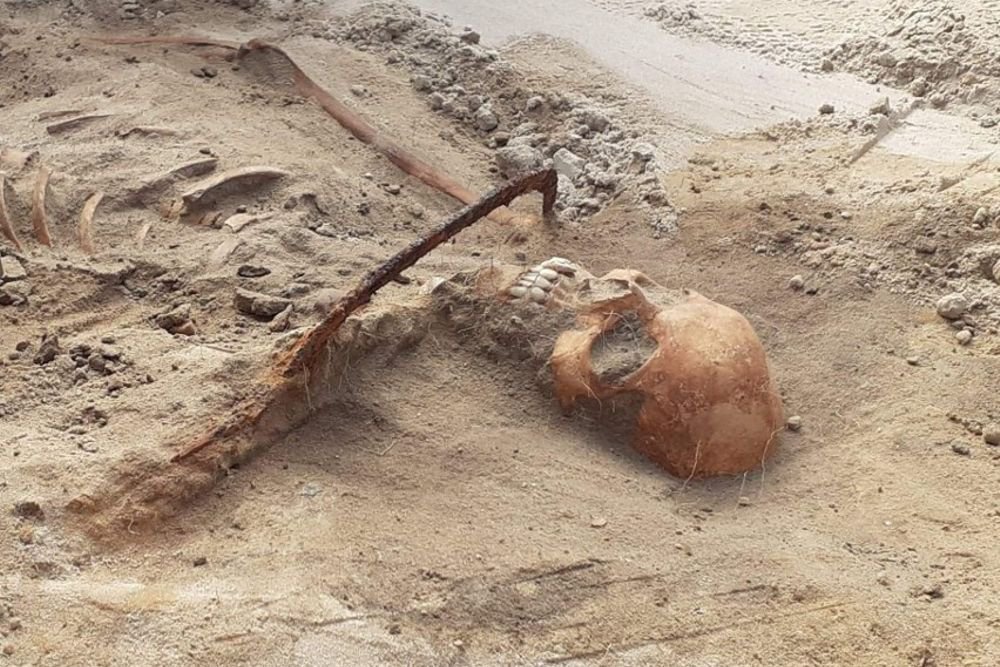 The extraordinary remains of a supposed ‘vampire’ have been uncovered at an archaeological site in Poland.

Experts found the female body with a sickle across its throat, pinning it to the ground.

‘The sickle was not laid flat but placed on the neck in such a way that if the deceased had tried to get up most likely the head would have been cut off or injured,’ explained Professor Dariusz Poliński from the Nicholas Copernicus University.

The body was found during archaeological work at a 17th century cemetery in the village of Pien in south-eastern Poland.

According to the university team, she had a silk cap on her head – indicating high social status – and a protruding tooth. Strangely, one of her toes was also secured with a padlock.

Professor Poliński explained to the Daily Mail that padlocking the big toe on the skeleton’s left foot likely symbolised ‘the closing of a stage and the impossibility of returning.’

He added: ‘Ways to protect against the return of the dead include cutting off the head or legs, placing the deceased face down to bite into the ground, burning them, and smashing them with a stone.’

Vampires and zombies are as much a part of medieval popular culture as they are today.

As far back as the 11th century, many believed corpses would claw their way back up through the ground and emerge as blood-sucking monsters.

This was partly due to the amount of infectious diseases, like cholera, around at the time.

‘People of the post-medieval period did not understand how disease was spread, and rather than a scientific explanation for these epidemics, cholera and the deaths that resulted from it were explained by the supernatural – in this case, vampires,’ said Dr Lesley Gregoricka, from the University of South Alabama.

In 2014, archaeologists in the village of Drewsko 130 miles away found six skeletons buried in a similar manner at a 400-year-old cemetery.

Sickles were found pressed against the throats of an adult man, who was between 35 to 44 years old, and an adult woman around 35 to 39 years old.