Just because you can do a thing, that doesn’t mean you should. That’s especially true when it comes to towing a 53-foot-long trailer using a standard-issue three-quarter-ton pickup.

A driver in Ontario, Canada, hooked up a 53-foot trailer—yes, like the ones that semitrucks tow—to a mid-2000s Chevrolet Silverado. We can only guess as to why, or speculate whether the driver had tried this before, but nonetheless, the adventure ended with the Ontario Provincial Police pulling the rig over and ticketing the driver, because as one might assume, this is not exactly the safest practice on a public road.

From photos posted on the police department’s Facebook page, it appears the driver had built some sort of air braking system, which would have helped with towing the trailer but definitely wasn’t enough to make it safe.

As shown in the photos the Ontario police posted to Facebook, the driver had attached the trailer via a pin to the hitch, leading one Facebook commenter to lament, “As danger as that is. [sic] I’m partially impressed with the fact that pin was able to handle the stress of accelerating and braking.” 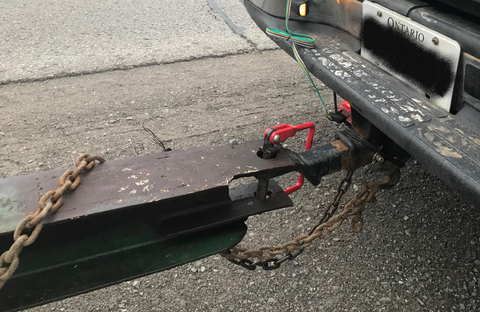 From: Car and Driver