As CES turns into an 8K battleground for television makers, LG is wowing crowds with a rollable OLED screen which rises up from a soundbar.

Unveiled at the annual Consumer Electronics Show in Las Vegas, the LG Signature OLED TV R sports a 65-inch 4K screen which silently retracts into the soundbar base when not in use. A panel slides across to cover the slot, completely hiding the rolled up screen from view. 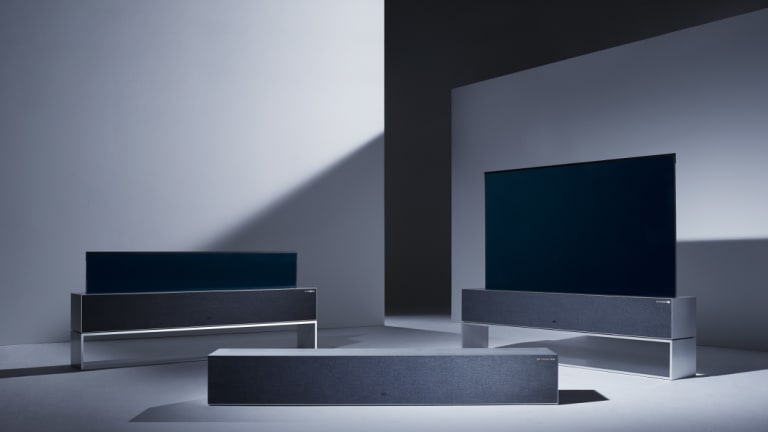 The LG rollable TV in its three modes.

The 4.2-channel, 100-watt Dolby Atmos soundbar base can still play music when the screen is completely hidden from sight in "Zero View" mode, or only one quarter visible in "Line View" mode.

Based on LG's flexible OLED technology, the rollable screen doesn't sacrifice on picture quality compared to a standard 4K OLED.

While LG has confirmed that the Signature OLED TV R is coming to Australia in the second half of this year, there is no word on local pricing. It looks likely to sell for north of $20,000. 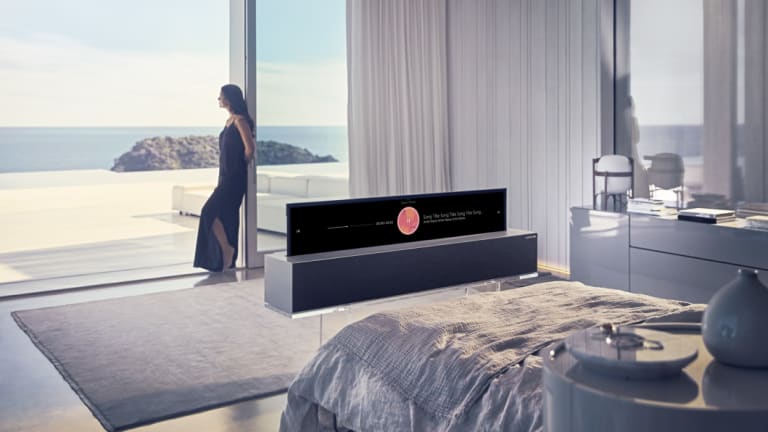 In its quarter view mode the TV can show images or music information.

Alongside the rollable TV, LG was one of a handful of TV makers showing off production model 8K televisions at CES, ready to go on sale this year. Alongside its 8K 88-inch Z9 OLED, previously shown as a prototype, LG displayed its 8K 75-inch SM99 LCD LED "Super UHD" TV.

Offering four-times the sharpness of 4K, and 16-times that of Full HD, 8K video offers 7680×4320 resolution relying on more than 33 million pixels.

While there is still nothing for Australian consumers to watch in 8K, all of the 2019 LG OLEDs will ship with HDMI 2.0 video connectors but are set to receive an HDMI 2.1 firmware update this year. Some Super UHDs will also receive the HDMI 2.1 upgrade (with LG rebranding its Super UHD technology as "NanoCell" in most countries, but not Australia).

The recently ratified HDMI 2.1 standard supports 8K video as well as 4K High Frame Rate (HFR) at 120 frames per second, thanks to 48 gigabit per second throughput.

While LG's latest televisions use the same OLED and Super UHD panel technology as last year, the 2019 models benefit from the new A9 Gen 2 processing chip.

Taking advantage of AI and deep learning, the new chip offers audio and video "content enhancement" based on the source material, as well as "content optimisation" based on the room's ambient lighting. It also takes advantage of 6-step noise-reduction when upscaling content to 8K.

On the smart home front, LG is adding support for Amazon's Alexa smart assistant to its televisions, sitting alongside Google Assistant as part of the WebOS 4.5 upgrade. LG has also improved its own ThinQ assistant to support contextual follow-up questions.

To complement these smart assistants, LG is also adding Apple's AirPlay 2 streaming connectivity to its 2019 televisions, which will also work with HomeKit, displaying Apple-friendly smart home gear alongside Google and Amazon devices in the new onscreen Home Dashboard.

Meanwhile, Samsung remains the major holdout in the move to OLED for premium screens. Instead, it unveiled a lounge room-friendly 75-inch 4K MicroLED television at CES, alongside its 219-inch MicroLED Wall. The televisions take advantage of a modular design so multiple screens can be linked in one large display.

Like LG's OLED, Samsung's MicroLED does away with a backlight in favour of each individual pixel creating its own light; allowing for amazing contrast and overall picture quality to rival LG's highly-respected OLED panels.

Samsung also displayed 8K QLED televisions at CES, unveiling its new 98-inch Q900FN QLED 8K TV after revealing several smaller 8K models back in August at the IFA technology show in Berlin. It is also adding Google Assistant and Alexa to its televisions, to run alongside Samsung's own Bixby smart assistant.

The author travelled to Las Vegas as a guest of LG.