While much of the talk ahead of this week's MWC show in Barcelona has concerned foldable smartphones with ever more camera modules on the back, LG has gone in a different direction. Opting out of the foldy race for now, the South Korean company has instead unveiled a pair of phones filled with some unusual and less expected tech.

The LG V50 ThinQ 5G (which we'll just be calling the V50), follows the V series tradition of offering an incredibly cool if somewhat niche device, as distinct from the more mainstream flagship G series. The obvious new feature here is 5G compatibility — which you can't miss because LG has included a big glowing "5G" logo on the back of the phone — but that isn't necessarily the most interesting thing here.

On the front of the phone you'll find a tall 6.4-inch OLED with HDR10 and Dolby Vision compatibility. But if that isn't enough for you you can purchase a secondary screen that attaches to the device and makes it look like a high-tech book. It clips onto the phone like a folio case, but clicks open to one of two set angles for stability. The second screen pulls power from the main phone and is also an OLED, albeit at a slightly lower resolution than the main screen.

This might not be a foldable display like Samsung and Huawei have shown off, but LG claims the setup makes the V50 a multitasking powerhouse. For example you can watch a video on one screen while messaging or browsing the web on the other, or you can split each screen two ways for four small app windows at once. Certain games will also support having controls on the lower screen and action up top, like a massive OLED Nintendo DS with no buttons.

Elsewhere the V50 provides plenty of grunt with the new Snapdragon 855 processor and 6GB of RAM. It has a standard, telephoto and ultrawide camera on the back, as well as a standard and ultrawide on the front, as well as some nice premium extras like stereo speakers with DTS:X tech built in, and a big 4000mAh battery (which is still likely to be stressed if you're using 5G and two screens). Like Samsung's S10 5G, the V50 will be exclusive to Telstra when it launches. 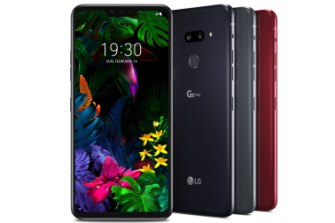 Confusingly, LG says some regions will get a G8 with two rear cameras, while others will get the full three.

Also unveiled at MWC was the LG G8 ThinQ which, while less flashy than the V50, has some unusual tricks of its own. While it packs a similar screen and camera setup — and the same chip and RAM — into a slightly smaller frame, the G8 adds a 3D time of flight camera to the front. LG calls this the "Z camera", and it's used to draw a very quick, very accurate 3D map of whatever you put in front of it.

This can be used to unlock the phone with your face, which should in theory be faster and more consistent than Apple's Face ID. But LG also lets you unlock your phone by opening your palm in front of it, letting the device recognise the specific shape and thickness of the veins inside your hand. This "Hand ID" sounds impressive, but it remains to be seen if it's more convenient or reliable than using your face.

Of course the Z camera also makes for more complex selfies, and you can even make hand gestures in front of the phone — like pinching or waving — to operate it without touching, for those itching to live out their Minority Report fantasies. On the rear camera, the G8 can apparently film in portrait mode, analysing depth in real time to deliver in-focus subjects and blurred backgrounds.

Finally, the speakers have been removed and replaced with a vibrating screen technology and resonance chamber that work together to make sound without taking up precious space on the front of your phone. This is simular to the trick used by some high-end OLED TVs. Time will tell if it's as loud and full as a traditional phone speaker, but if not at least both the new LG phones keep the 3.5mm headphone jack.

No prices for either phone have been announced so far.