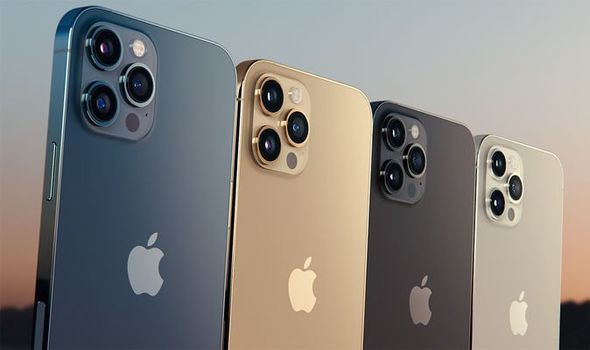 Apple has taken the wraps off its successor to the iPhone 11 Pro and iPhone 11 Pro Max. Known as the iPhone 12 Pro and iPhone 12 Pro Max, Apple claims these new flagship handsets, which start from £999 and £1,099 in the UK, are the fastest smartphones on the planet. That’s due to the Apple-designed A14 Bionic chipset, which the Californian company says has enabled it to shoot better photos, support Dolby Vision video capture, as well as 5G download speeds that are almost 5x faster than the average UK broadband speed.

There’s also new colours, a magnet built into the case to snap! to wireless chargers and more battery life than iPhone 11 Pro. What there isn’t – is a charger in the box. Apple has ditched the plug and wired headphones in order to reduce electronic waste, so anyone who needs to recharge their new iPhone by plugging it into the wall socket will need to cough-up an extra £29 at the Apple Store. Ouch. Apple announced the iPhone 12 Pro alongside a new smaller HomePod Mini, as well as a more affordable iPhone 12, and the iPhone 12 Mini – the smallest and lightest 5G smartphone on the market, according the US firm.

When viewed from the front, iPhone 12 Pro looks almost identical to its predecessor – with the same edge-to-edge touchscreen, Face ID, selfie camera, and curved notch all present and correct. Flipping the handset over, Apple has kept the same square-shaped camera bump as last year. The main camera, ultra-wide and telephoto lenses keep the same triangular arrangement, but unlike the iPhone 11 Pro, Apple has added a small LiDAR scanner.

This isn’t the first time we’ve seen Apple experiment with this technology. Apple added a LiDAR scanner to its iPad Pro line-up earlier this year. The NASA-developed technology can measure the distance to objects up to five meters away. LiDAR, which stands for Light Detection and Ranging, is the same system used by Tesla to help its vehicles drive themselves and works indoors and outdoors and operates at nano-second speeds. Apple said it added the LiDAR scanner to the back of its iPad Pro for better Augmented Reality (AR) application, which superimpose digital objects onto the real-world as you peer through the viewfinder. With the iPhone 12 Pro, Apple says the system will be able to unlock better autofocus – especially in low-light.

And LiDAR isn’t the only new feature borrowed from the iPad Pro. While the iPhone 12 Pro looks almost identical to its predecessor when viewed from the front – the side tells a very different tale. The new design takes its cure from the latest generation iPad Pro as well as previous Apple smartphones, like the iPhone 4 and iPhone 5. Gone are the bulbous curves of the iPhone X, iPhone Xs and iPhone 11, replaced with flat edges and sharper angles. This should make the smartphone a little easier to use one-handed – a common complaint with recent Apple handsets.

One thing that won’t make the new smartphones easier to use one-handed – the new screen sizes. iPhone 12 ships with a 6.1-inch OLED display, while the iPhone 12 Pro Max sports a whopping 6.7-inch panel. That’s the biggest screen that’s ever shipped on an Apple smartphone, topping the 6.5-inch touchscreen found on the iPhone 11 Pro Max last year. Apple says it has managed to keep the footprint of the iPhone 12 Pro about the same as last year, despite the bigger displays. To achieve this, the company has reduced the borders around the edge of the OLED display, however, in the comparisons shown during the online event, both iPhone 12 Pro and iPhone 12 Pro Max look slightly taller than their predecessors. 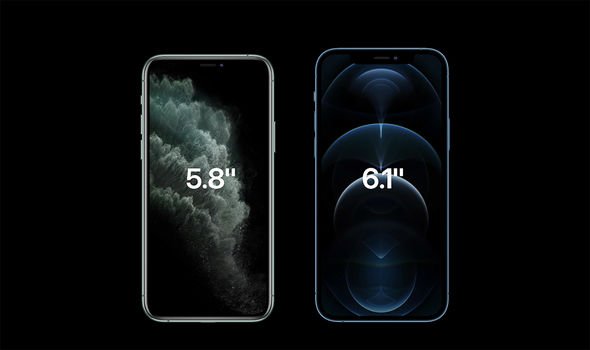 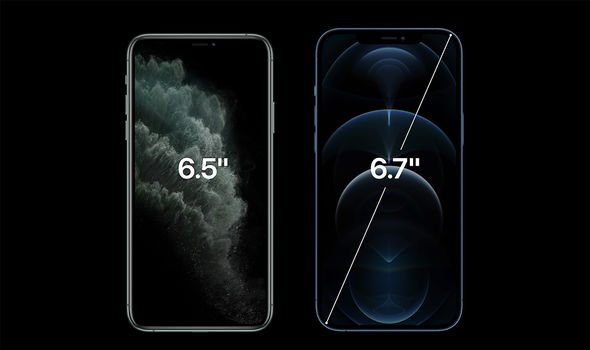 Powering the iPhone 12 Pro series is the shiny new A14 Bionic processor. The successor to the A13 Bionic inside the iPhone 11 Pro – which still comfortably ranks as one of the most powerful mobile chipsets on the market despite being a year-old compared to the latest Android rivals – Apple says it has focused on power and efficiency. The Californian company is keen to stress that, despite the bigger OLED displays and the addition of 5G support, the battery life on the new models will outlast the iPhone 11 Pro.

A14 Bionic also brings some improvements to the camera. The Neural Engine – the portion of the chipset that handles Artificial Intelligence (AI) – has expanded to 12-cores (up from eight cores in the A13) which has enabled Apple to bring its Night mode, which extracts details from the gloom without relying on the blinding LED flash, to every camera on the iPhone. Previously only available in the main rear-facing camera, iPhone owners can now take ultra-wide images with Night mode as well as selfies.

The cameras on the iPhone 12 Pro Max also benefit from larger sensors, which can gather more light to improve low-light performance. Optical Image Stabilisation (OIS) has also been improved, which helps to keep the footage steady when you’re walking with the camera as well as reduce blurriness from low-light images. 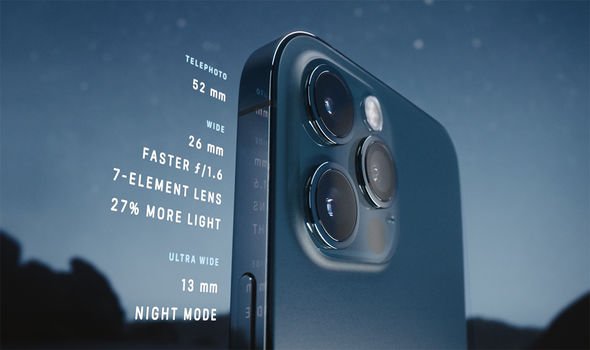 Video quality will also benefit from the addition of A14 Bionic, although there’s no new slow-motion modes or 8K video capture this time around. Instead, the headline feature is the arrival of HDR video, which captures 700 million colours. iPhone 12 Pro is the first smartphone to record in Dolby Vision HDR quality – the A14 chipset processes and colour-grades each frame in real-time with a live preview in the viewfinder. You can even tweak the Dolby Vision tuning with filters direct in the Apple Photos app. This works in 4K quality.

Apple says its iPhone 12 Pro is the first – and only – smartphone to capture, edit and share Dolby Vision video. 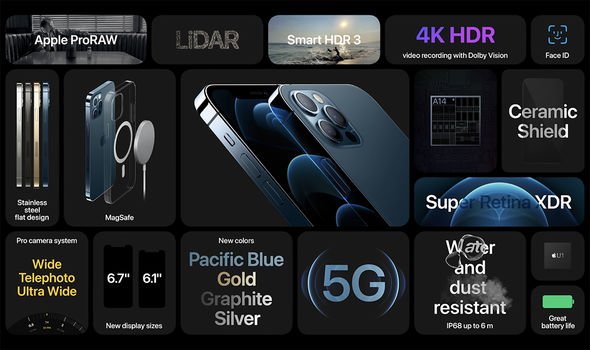 Apple is dropping the bundled EarPod wired headphones and plug from the box of all new iPhone models. The Cupertino company says the move is designed to reduce electronic waste – as most customers already have wired headphones or have switched to wireless options – like AirPods. According to Apple, the decision to remove the plug and headphones, which enables Apple to shrink the size of the box to squeeze more boxes onto every shipping container, is the same as removing 450,000 cars from the road each year.

It’s an impressive statistic. But whether customers will be happy with the decision remains to be seen. Apple is bundling a charging cable in the box, however, this is a Lighting to USB-C cable – which is needed to enable fast wired charging. However, customers who don’t already have a USB-C plug from Apple will have to cough-up £29 for the plug, which was included for free last year, from the Apple Store.