Maybe the most poignant scene in the warmly received video game “Marvel’s Spider-Man: Miles Morales” comes at the end. Miles, the titular superhero protagonist, has spent the whole game trying to save Harlem, and both he and the neighborhood look the worse for wear. A reporter on the scene asks residents who their masked savior is.

“That guy?” a muralist says, just as Miles swings away. “He’s our Spider-Man.”

The “our” is said as if it were underlined. Miles belongs to an authentic Afro-Latino community brimming with life. He wears Timberlands and dances to salsa. He speaks Spanish with his mother. He can take a bodega cat with him on his adventures. This Spider-Man is different because he’s theirs.

The character has been around since 2011 — a relative blip in the nearly six-decade history of Spider-Man — but has quickly climbed in stature among fans. And “Spider-Man: Into the Spider-Verse,” the 2018 best animated feature Oscar winner, let Miles take up more permanent residence in the American consciousness. If Peter Parker was always New York City’s “friendly neighborhood Spider-Man,” Miles makes it clear that his neighborhood matters.

“He’s going to feel that responsibility in a different way,” said Evan Narcisse, a writer for the game who helped shape its narrative. “You know how it is when you’re a Black person and you’re breaking new ground? You’re like, ‘I can’t mess up.’”

Insomniac Games brought in Mr. Narcisse, a Brooklyn-born Haitian-American writer and critic who wrote the “Rise of the Black Panther” comic book series, to help the writing team give Miles and his home a sense of authenticity. He spoke with The New York Times last week about the writing process for the game as well as the character’s importance.

The following is an edited and condensed version of the conversation.

Part of it was anticipating — or trying to anticipate — audience response: As a reader and critic, somebody who has written about Miles as a character before, what did I see as areas to explore? And the big thing for me was this can’t be a re-skin. This can’t be a palette swap of the Peter Parker game. Miles is different as a character. What kind of stories you can tell through those differences. 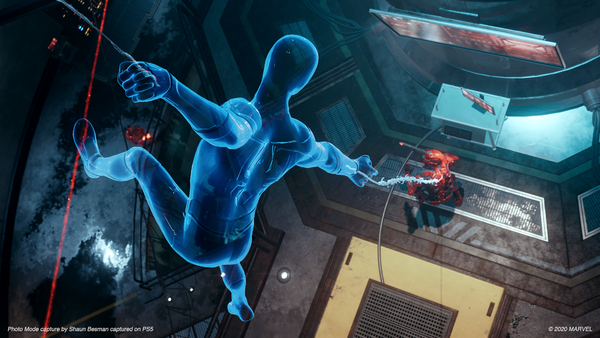 Obviously, his cultural background, his race, is one of them. But even aside from that, with Peter Parker you tell stories about a very individual kind of guilt and responsibility. With Miles, he’s got a mom and his dad, and an uncle. He has a family. So you can tell stories about family through Miles in a way that you can’t about Peter. Peter pretty much only has Aunt May.

What is it like writing a character like Miles specifically for a video game? What about the character did you feel could be expressed only in a game?

Video games as a medium I’m finding to be incredibly collaborative. There are so many disciplines that get brought to bear to create a video game, especially one of this size. So I made a comment about Miles’s fashion, about his hair, of course. There’s a whole team of artists that start figuring out their looks and polishing them. Writers are like the ligaments and connective tissue if level designers are like the muscle. Or skeleton. I’m torturing this metaphor, but different parts of a large multicellular organism. It was very much a team effort.

It’s wild, because during the development cycle of the game, “Spider-Verse” came out. It comes out, it becomes this massive hit, imprints the character on the collective psyche of the public. But there was one scene early on when Miles leaves his house and he’s walking to school, and he’s saying hello to the neighborhood. And one thing that I hit upon and we worked on was that in the video game, the neighborhood can talk back to him.

One of the things for me was early on in the game, one of the points I made was his skin should be showing through his costume. This is the scene when the Roxxon security operatives have their guns on him. So I wanted to charge that scene, obviously, with some metaphorical energy.

I remember that scene.

The reason I made the case for that is, they see his skin peeking through his costume and immediately the whole city’s going to know that this Spider-Man is different in a fundamental way than the other one. Once Harlem and other Black and brown communities in the city know that this new Spider-Man is one of theirs, they’re going to react differently to him.

So that was the one of the ideas we approached when figuring out how to voice Miles. He was always going to be in conversation with the world around him. That idea also informed the mission structures. Figuring out what a neighborhood feels like and how to make it feel like that in the video game was a big part of what was important for me. I lived in Harlem for five years, fell in love with Harlem. I was a kid who grew up in Brooklyn and then moved to Harlem, and they have different vibes.

This game feels timely in how it portrays people of color, their communities, and their relationship to political and corporate power. It just feels like it hits differently in 2020.

One of the things that I know from having written about and written comics, there’s always this weird onus on Black superheroes to solve racism. One thing that’s tricky about that trope with a character like Miles is that he’s a teenager. He doesn’t have all the answers. But I think we definitely want to gesture at themes of encroachment, gentrification, obviously. On corporate overreach and how a lot of times that asymmetrical power imbalance negatively affects communities of color.

Miles is coming into his own in pop culture in what feels like this really accelerated way. How does that inform where the character can go next?

Man, I think there’s just such an amazingly broad canvas of possibilities for Miles. I think the opportunity exists to reinvent a lot of [Peter Parker’s] characters so that Miles can have different relationships with them.

The idea of a character wearing Air Jordans or Adidas and basketball shorts, and dressed up like a kid from around the way, would have been laughed at 20 years ago. But now it’s like, “Oh wait, there’s a whole new language of style and expression that you can access through this character.” And I feel like his accelerated popularity almost invites that. It invites this idea that people can make the character their own, and they really have.