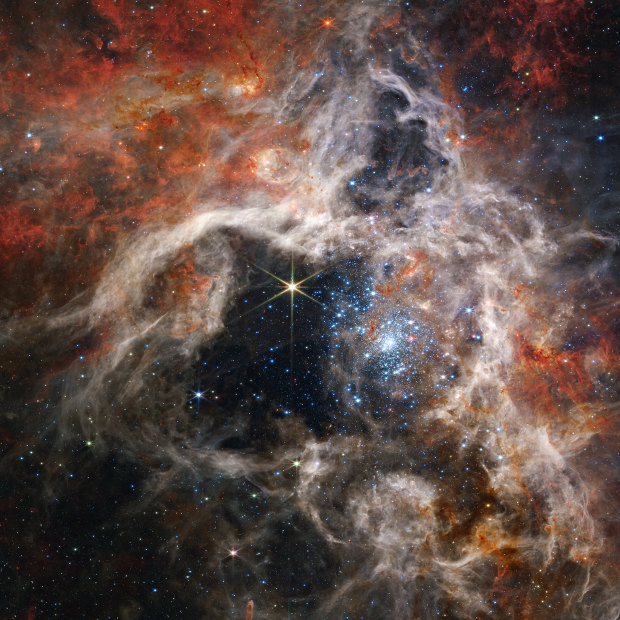 So far it’s been eye candy from heaven: The black vastness of space teeming with enigmatic, unfathomably distant blobs of light. Ghostly portraits of Neptune, Jupiter and other neighbours we thought we knew. Nebulas and galaxies made visible by the penetrating infrared eyes of the James Webb Space Telescope.

The telescope, named for James Webb, the NASA administrator during the buildup to the Apollo moon landings, is a joint project of NASA, the European Space Agency and the Canadian Space Agency. It was launched on Christmas one year ago — after two trouble-plagued decades and $US10 billion ($14.8b) — on a mission to observe the universe in wavelengths no human eye can see. With a primary mirror 21 feet wide, the Webb is seven times as powerful as the Hubble Space Telescope, its predecessor. Depending on how you do the accounting, one hour of observing time on the telescope can cost NASA $US19,000 or more.

But neither NASA nor the astronomers paid all that money and political capital just for pretty pictures — not that anyone is complaining. “The first images were just the beginning,” said Nancy Levenson, temporary director of the Space Telescope Science Institute, which runs both the Webb and the Hubble. “More is needed to turn them into real science.”

For three days in December, some 200 astronomers filled an auditorium at the institute to hear and discuss the first results from the telescope. An additional 300 or so watched online, according to the organisers. The event served as a belated celebration of the Webb’s successful launch and inauguration and a preview of its bright future. 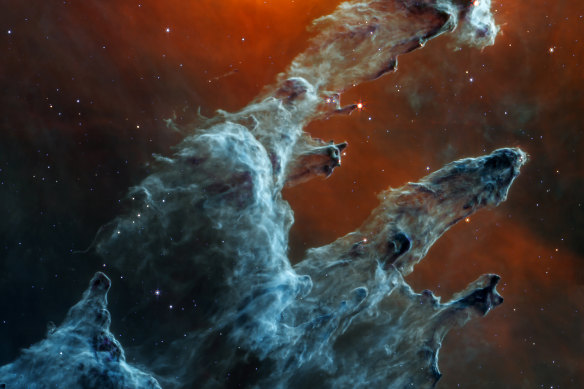 One by one, astronomers marched to the podium and, speaking rapidly to obey the 12-minute limit, blitzed through a cosmos of discoveries: Galaxies that, even in their relative youth, had already spawned huge black holes. Atmospheric studies of some of the seven rocky exoplanets orbiting Trappist 1, a red dwarf star that might harbor habitable planets. (Data suggests that at least two of the exoplanets lack the bulky primordial hydrogen atmospheres that would choke off life as we know it, but they may have skimpy atmospheres of denser molecules such as water or carbon dioxide.)

“We’re in business,” declared Bjorn Benneke of the University of Montreal, as he presented data of one of the exoplanets.

Megan Reiter of Rice University took her colleagues on a “deep dive” through the Cosmic Cliffs, a cloudy hotbed of star formation in the Carina constellation, which was a favourite early piece of sky candy. She is tracing how jets from new stars, shock waves and ionising radiation from more massive nearby stars that were born boiling hot are constantly reshaping the cosmic geography and triggering the formation of new stars.

“This could be a template for what our own sun went through when it was formed,” Reiter said in an interview.

Between presentations, on the sidelines and in the hallways, senior astronomers who were on hand in 1989 when the idea of the Webb telescope was first broached congratulated one another and traded war stories about the telescope’s development. They gasped audibly as the youngsters showed off data that blew past their own achievements with the Hubble.

Jane Rigby, project scientist for operations for the telescope, recalled her emotional tumult a year ago as the telescope finally approached its launch. The instrument had been designed to unfold in space — an intricate process with 344 potential “single-point failures” — and Rigby could only count them, over and over. “I was in the stage of denial,” she said in Baltimore. But the launch and deployment went flawlessly. Now, she said, “I’m living the dream.”

Garth Illingworth, an astronomer at the University of California, Santa Cruz, who in 1989 chaired a key meeting at the Space Telescope Science Institute that ultimately led to the Webb, said simply, “I’m just blown away.”

At a reception after the first day of the meeting, John Mather of NASA’s Goddard Space Flight Centre and Webb’s senior project scientist from the start, raised a glass to the 20,000 people who built the telescope, the 600 astronomers who had tested it in space and the new generation of scientists who would use it.

“Some of you weren’t even born when we started planning for it,” he said. “Have at it!”

Thus far the telescope, bristling with cameras, spectroscopes and other instruments, is exceeding expectations. (Its resolving power is twice as good as advertised.) The telescope’s flawless launch, Rigby reported, has left it with enough maneuvering fuel to keep it working for 26 years or more. 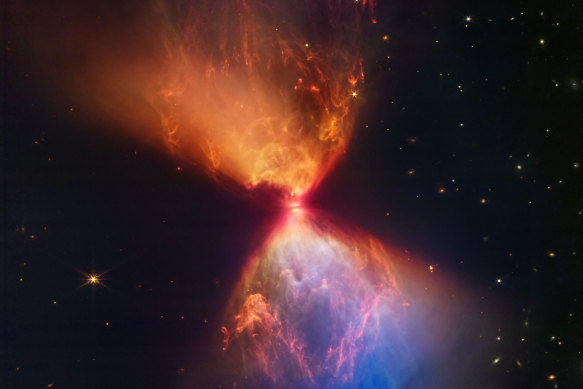 Deep in a cloud of dust and gas, a star is being born. At the center of the hourglass light from a spinning shrinking protostar leaks out the top and bottom of a thick disc of matter feeding it and illuminates surrounding gas and dust clouds.Credit:NASA, ESA, CSA, STScI, Webb ERO Production Team via The New York Times

“These are happy numbers,” she said as she and her colleagues rattled off performance statistics of their instruments. Rigby cautioned that the telescope’s instruments were still being calibrated, so the numbers might yet change.

Perhaps the biggest surprise from the telescope so far involves events in the early millenniums of the universe. Galaxies appear to have been forming, generating and nurturing stars faster than battle-tested cosmological models estimated. “How did galaxies get so old so fast?” asked Adam Riess, a Nobel physics laureate and cosmologist from Johns Hopkins University who dropped in for the day.

Webb’s infrared vision is fundamental to these efforts. As the universe expands, galaxies and other distant celestial objects are speeding away from Earth so fast that their light has been stretched and shifted to invisible, infrared wavelengths. Beyond a certain point, the most distant galaxies are receding so quickly, and their light is so stretched in wavelength, that they are invisible even to the Hubble telescope.

The Webb telescope was designed to expose and explore these regions, which represent the universe at just 1 billion years old, when the first galaxies began to bloom with stars. “It takes time for matter to cool down and get dense enough to ignite stars,” noted Emma Curtis-Lake, of the University of Hertfordshire and a member of the JADES team. The rate of star formation peaked when the universe was 4 billion years old, she added, and has been falling ever since. The cosmos is now 13.8 billion years old.

Cosmic distances are measured with a parameter called redshift, which indicates how much the light from a faraway object has been stretched. Just a few months ago a redshift of 8, which corresponds to a time when the universe was about 646 million years old, was considered a high redshift. Thanks to Curtis-Lake and her colleagues, the record redshift is now 13.2, corresponding to when the universe was only 325 million years old. 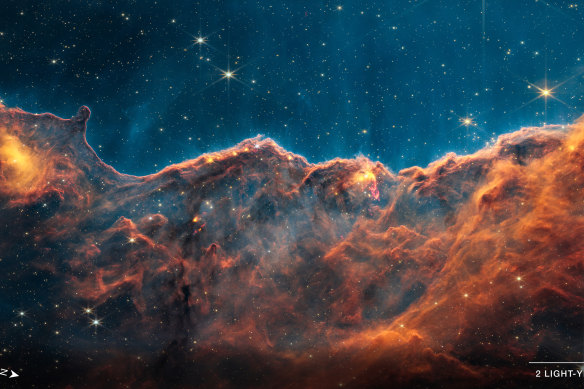 Curtis-Lake and her team had aimed the telescope at a patch of sky called GOODS South, looking for galaxies Hubble had been unable to detect. Sure enough, there were four of them, spectres in the heat-fog of creation. Subsequent measurements confirmed that they were indeed way back in time. “We didn’t want to say we believed it — publicly,” said Brant Robertson, a JADES member from the University of California, Santa Cruz.

The record is not expected to last long. The CEERS collaboration has reported a candidate galaxy that could have a redshift of 16, from when the universe was only 250 million years old.

Experts are arguing about whether these overeager galaxies reveal something fundamental, and overlooked, in current theories of the early universe. Perhaps some field or effect juiced up gravity back then and sped up the growth of galaxies and black holes. Or perhaps the discrepancies merely reflect scientific uncertainties about the messy details — the “gastrophysics” — of star formation.

For the past 20 years, astronomers have honed a solid “standard model” of a universe composed of dark energy, dark matter and a smidgen of atomic matter. It’s too soon to break that model, Curtis-Lake said in an interview; Webb has perhaps three decades of observing ahead of it. “We’re in early stages,” she said.

In the closing talk, Mather limned the telescope’s history, and praised Barbara Mikulski, a former senator of Maryland, who supported the project in 2011 when it was in danger of being cancelled. He also previewed NASA’s next big act: a 12-meter space telescope called the Habitable Worlds Observatory that would seek out planets and study them.

“Everything that we did has turned out to be worth it,” he said. “So we are here: This is a celebration party, getting a first peek at what’s out here. It’s not the last thing we’re going to do.”