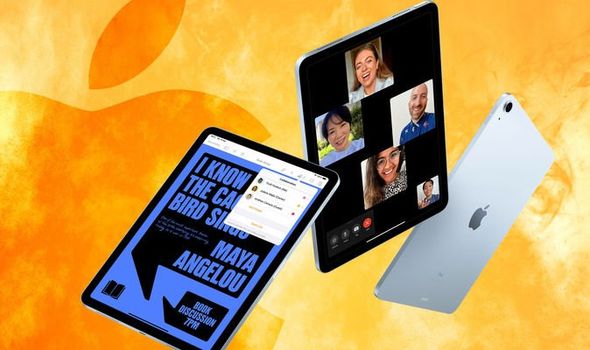 Apple announced its all-new iPad Air in a glitzy pre-recorded event last month, where it took the wraps off the Apple Watch SE, and Apple Watch Series 6. At the time, Apple only revealed that its latest iPad Air, which will ship with a new design and colour options, would be available sometime “in October”. And in the weeks since the curtain fell on that event, the Californian company hasn’t revealed any further details about when to expect the iPad Air.

Thankfully, a new leak from retailer Best Buy might have revealed when you’ll be able to hit that all-important “Buy” button on the new tablet. While the US version of the Best Buy listing still states that iPad Air will be “Available in October” – exactly like the Apple Store, the Canadian version of the same webpage claims the iPad Air will launch October 23, 2020. This discrepancy was first spotted by those eagle-eyed folks at MacRumours.

Anyone who watched the iPhone 12 launch event earlier this week will know that October 23 is already a pretty important date – it’s when those who pre-ordered the first iPhone 12 and iPhone 12 Pro smartphones will receive their parcels in the mail. It’s also the first time the new handsets will be available to pick-up from store shelves, so those looking to take a look at the smartphone before committing to an upgrade with their mobile carrier will be able to see the new gadgets in the flesh.

iPhone 12 and iPhone 12 Pro are powered by the same Apple-designed processor found inside the new iPad Air, which promises faster speeds and better battery life. Apple may have wanted to prevent details about the A14 chip – like the exact speeds when compared to rival processors from Samsung, Qualcomm and Huawei – from appearing online before the ‌iPhone‌ 12 is in customers’ hands. In recent years, Apple has always announced its latest iteration of silicon with the iPhone – not the iPad.

MORE LIKE THIS
Apple doesn’t include a charger with its £1,399 new iPhone 12… you’ll need to pay extra for that 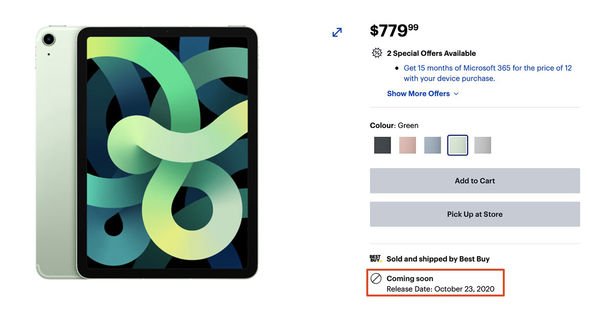 Elsewhere, the fourth-generation iPad Air borrows heavily from the iPad Pro, with an edge-to-edge display that only leaves a thin border around the tablet to hold, as well as support for the second-generation Apple Pencil which charges wirelessly when it snaps to the side of the iPad with magnets. Unlike the iPad Pro, there’s no Face ID to be found here. Instead, Apple has fitted a Touch ID fingerprint sensor in the power button at the top of the tablet. This is what will be used to unlock the device as well as authenticate Apple Pay payments online and in-apps.

There’s also only a single camera on the back of the tablet – with the ultra-wide camera and fancy new depth-sensing LiDAR scanner reserved for the iPad Pro. However, that’s something most people won’t miss. Instead, the iPad Air generous selection of colours, including Gold, Green, Blue, Space Grey, and Silver, are more likely to appeal.

Whenever the iPad Air is available to buy, it’ll cost you £579 for the Wi-Fi only model with 64GB of built-in storage. That’ll rise to £729 for the 256GB variant and tops-out at £859 for the 4G and Wi-Fi model with the same amount of storage.