“Every day the world gets a little more complicated and being a good person gets a little harder to do.” This line is from the NBC’s popular show, The Good Place, and it does a good job at summarising the difficulty of being a moral human right now. US writer Jia Tolentino makes a similar observation in her new collection of essays, Trick Mirror, “the choice of this era is to be destroyed or to morally compromise ourselves in order to be functional – to be wrecked, or to be functional for reasons that contribute to the wreck.” 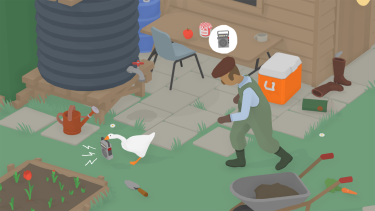 The goose steals a radio.

Being good is difficult. Pretty much every choice we make directly pumps carbon emissions into the atmosphere, contributes to unfair labour practices, props up unethical companies, or in some way contributes to another’s oppression. Unless we opt out of modern life altogether, we’re constantly compelled to do things that are morally uncomfortable, or downright wrong. This daily, repetitive compromise might be why Untitled Goose Game is so popular.

Recently developed by a team in Melbourne, Untitled Goose Game (a computer game for Nintendo Switch, PC, and Mac) gets users to play a charmingly misanthropic goose to cause random havoc in a little English village. You’re given a list of misdeeds to pursue – you steal a boy’s glasses, you throw a man’s rake in a lake, you remove a chair from under an old dart player as he goes to sit down, you frighten and harass all the humans.

There are no consequences for messing everything up short of getting the villagers to erect anti-goose signage. You derive humour and satisfaction from becoming the goose. As writer Daniel Mallory Ortberg encapsulates the experience, “Honk! Honk! I flap open my back in celebration when I make victory over the fence, when I smash it from its lock, when I smash it down, when I undo all of your doing.” It’s safe to be the goose – nobody dies and, after all, video games are just pretend – so you can focus on your jubilant chaos.

The unbridled, purposeless destruction isn’t dissimilar to properly violent games like Grand Theft Auto where you play a criminal in a big city and must destroy things, steal cars, and evade police, with options as well to murder and maim. Yet, unlike the complex world of Grand Theft Auto, Untitled Goose Game is contained in a village with only five locations, and allows us to fantasise about being a simple goose who has no other priorities than trickery. Everything you do as a goose is right, because you’re just doing what a goose does. Your antisocial antics feel natural, a biological imperative, even. Untitled Goose Game gives us a welcome space away from the stress of having to make decisions, all of which are wrong somehow.

Erin Stewart is a Melbourne writer.