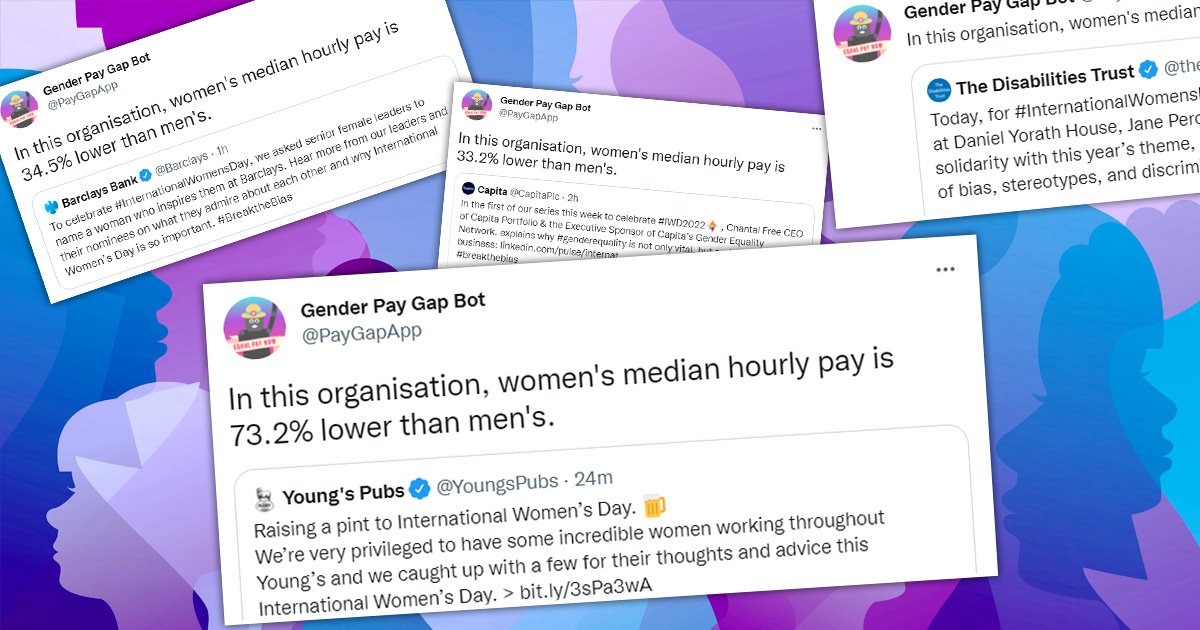 Since 2017, companies with over 250 employees have been required to report their gender pay gap every year since 2017.

But judging from conversations I’ve had with friends, awareness of this data is still pretty low.

Or it was, until Tuesday 8th March – International Women’s Day 2022.

When the usual messages of ‘empowerment’, ‘celebration’ and ‘inspiration’ from companies started flooding social media that morning, my partner Ali Fensome and I confronted them with their own data on their gender pay gap via the @PayGapApp Twitter bot.

We created @PayGapApp to put the gender pay gap data back into the spotlight.

When a company listed on the government’s gender pay gap service tweeted about International Women’s Day, the bot automatically responded with their median hourly pay gap data in a quote tweet.

Within hours, our bot had 250k Twitter followers and companies with the most stark pay disparities were getting hundreds of retweets.

Our aim was to highlight how photos of smiling female employees and inspirational quotes conceal what’s really going on behind the scenes. Women’s median hourly pay was less than men’s at 77% of companies in 2020-2021, which shows that the support companies’ pledge for International Women’s Day is rarely backed up by action.

It’s Ali’s tech expertise that brought it all together – he works as a software consultant, so he had all the right skills to automate each step and make sure it worked seamlessly.

That doesn’t mean there weren’t challenges along the way. For one, companies often use slightly different names between their social media accounts and the government data, which made matching companies to their Twitter usernames a bit more difficult.

Academy trusts are the perfect example of this: their gender pay gap data is recorded for the whole trust, but each school within it might have a separate Twitter account.

Since we launched @PayGapApp this year, we’ve posted 2190 tweets and had over 150million tweet impressions (the amount of times our tweets were shown to users).

I hope @PayGapApp has sent a message to companies that posting about ‘empowering women’ is not enough. We need the support you show on International Women’s Day to continue all year round.

Where is that solidarity when we ask for a pay rise? Or when we get interrupted in meetings? Or when we report harassment?

To say something worth saying on any type of social issue – be it gender equality, LGBT rights, anti-racism, accessibility – you’ve got to already be doing something worth doing.

Now is the time for companies to acknowledge their gender pay gap, look at what’s causing it, and implement policies like increased paid parental leave for all genders, blind recruitment and higher wages.

And to all the employers caught by the bot this year: you’ve got a whole 12 months now to work on it, so that next International Women’s Day won’t be so embarrassing for you.