Kingston, through its HyperX brand, is waging a constant war with Razer to make the blackest, sharpest and highest performing keyboards and mice — with the most RGB lights attached — that also manage to be accessible and affordable enough to put them in reach of non-professional gamers.

Now, with its new entry level keyboard and mouse, HyperX is making the bold move of stripping out premium materials and features — like mechanical keys — in order to deliver the basics and aesthetics of a high-end rig at a fraction of the price. And, despite the compromise, they've turned out pretty well. 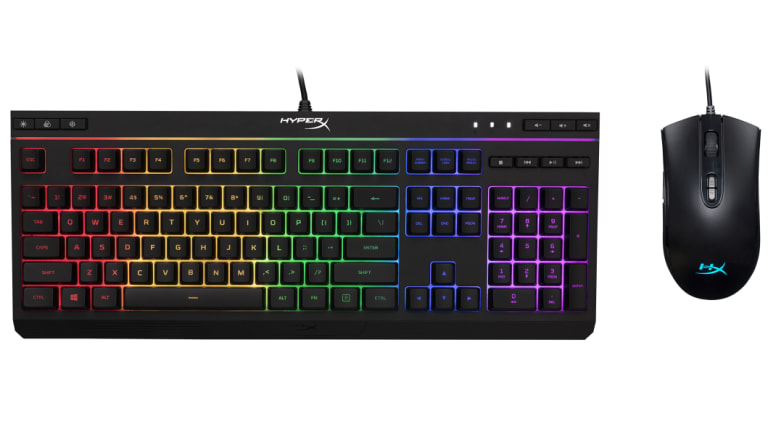 The $100 Alloy Core RGB, for starters, is quite different to the heavy, metallic, compact HyperX keyboards I've used in the past. The big plastic borders, dedicated media buttons and strip of light across the top give it the look of an edgy multimedia keyboard rather than something for hardcore gaming, which could be handy if your desk is in public view, but it feels sturdy and well built. It's advertised as spill-resistant to up to 120ml of liquid, which I did not test, but it's nice to know.

Though the keys are raised and feel very firm, you don't get the loud click you'll be expecting if you're used to a mechanical keyboard. Instead there's an incredibly smooth and almost silent action which, again, is handy if you're going to be using it within earshot of others. As a membrane keyboard this will never win over the highest of high-level gamers, but the Alloy Core does a very impressive job when it comes to responsiveness and feedback.

Another reason the keyboard can come in significantly cheaper than something like Razer's similar Ornata is that the RGB lighting is much simpler. Rather than every key being individually lit, there are five zones that can each glow in your chosen colour, with a nice-looking gradient between zones. There's also no way to fully customise the lighting via software on your PC; you use buttons on the keyboard to choose colours and effects. Still, this does look like a premium product when it's lit up, and I didn't miss the ability to define colours on a per-key basis.

The other product in the line is the Pulsefire Core mouse, a $70 device that looks a lot like the $110 Pulsefire Surge but again strips back all but the essential features. It has a less complex Pixart sensor, but still has a DPI of up to 6200 which will be sensitive enough for most players. It maintains the large, symmetrical design that feels great in your hand, but sticks with a little bit of lighting on the logo as opposed to having RGB all the way around.

You can use the HyperX software to customise the lighting, set your preferred sensitivity and define actions for each of the seven buttons (two on top and two on the side, plus the three up front), and it all works well. The action on the scrollwheel and buttons is lacking the weighty response of many high-end mice, but for the price it's excellent.

Overall these Core devices will give your desktop the look of a serious gaming rig, and enough of the functionality for most games and players. With consistent performance, a solid build and nice touches that keep the keyboard and mouse from feeling cheap — like the braided USB cables — these are excellent entry level devices.