Australians love coffee. Our baristas frequently beat the Italians in competitions, and it’s the first thing we complain about when we travel to America. We also charge a lot for our barista coffee ($3.50-$5.50).

Swiss appliance maker Jura recently released its new Z6 coffee machine, featuring the new Professional Aroma grinder, which it claims brings out 12.2 per cent more aroma. It retails for $3950 and isn’t complete without adding the new Cool Control machine, which keeps milk at 4 degrees Celsius, which Jura says is the perfect temperature for frothing (and a steal at only $249). 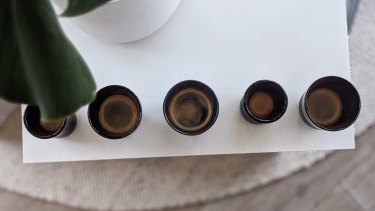 We pitted the Jura Z6 against a Nespresso machine and a barista. Credit:Karma Clarke

So, I decided to get a former barista (my wife) and a woman with a heightened sense of smell (my mother) to do blind taste tests and see which method of coffee brewing was best.

For test one, I had Maggie Kirkman drink: 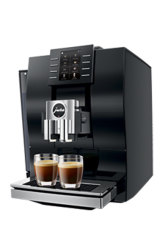 Maggie’sfirst job was to savour the aroma of each coffee and see if any gave off 12.2 per cent more aroma than the others. The Decaf Nespresso pod won easily, though the memory of the long black she’d had at Mario’s on Brunswick Street that morning was even better. Interestingly, she felt the Z6 grind had the least aroma, though it may have beat the Blue Cup and WayCap pods had they not smelled so strongly burnt.

When it came to taste, the Z6 grind won fairly easily, with the Crema Joe run through the Z6 coming second. The Decaf tasted thin, the Blue Cup tasted burnt and bland, and the WayCap tasted even worse. Visually, the Decaf had the best crema, while the WayCap had no crema at all.

In test two, Karma Clarke, a former barista and current food Instagrammer who is incredibly particular about her coffee, tried:

At first glance and smell, Karma picked the café coffee straight away, noting the café-quality appearance of the bubbles and smell. She also noted that the Z6 grind smelled strongly “fruity and yummy”, that the WayCap smelled like burnt filter coffee and had no crema, and that the Nespresso Roma capsule also smelled like café quality. She thought the Z6 grind was made using the Aeroccino, and that the Crema Joe done in the Z6 was too frothy for a latte. She also noted that the milk in the Blue Cup and WayCap cups wasn’t steamed correctly, while thinking that the steam in the Roma cup looked good – all three were done in the Aeroccino at the same time. 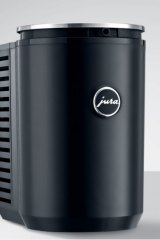 Taste, arguably the most important aspect of coffee, is where things got interesting. On the first sip, the café cup was considered too watery to be the professional one, with the Jura Z6 grind being declared better and “obviously from a Nespresso machine”. The preferred coffee was the ground Crema Joe through the Z6, which was also “probably Nespresso, because the milk bubbles are too big”. The Blue Cup was good, “better than the first [café], but not fancy”. WayCap was gritty and “not brewed properly”, while the Nespresso Roma capsule was “gritty and burnt”, though it did appear that the Roma might not have brewed correctly, as there were a lot of coffee grinds in the cup despite the machine being rinsed between each capsule being poured.

It was fascinating to see how brand loyalty played out during the test. Maggie primarily drinks plunger coffee, save from the occasional cup at a café for a treat, or some Nespresso every few months, and so had less of a brand expectation from the coffee. When it came to taste, she liked the coffees in perfect order from most expensive to least expensive. Karma frequently has café coffees to supplement the cups of Nespresso she has every morning, so it’s likely that her largely positive regular experiences with Nespresso made her associate the fancier, smoother coffee with the brand she’s used to relying on.

It was good to see the eco-friendly reusable Blue Cup pods make a reasonable cup of coffee. It’s a shame that the no-waste WayCap pods didn’t rate, but the only throw-away part of the Blue Cup pods is the foil lid, which is still a step up if you’re unwilling to take your aluminium Nespresso pods back to the store for recycling – or, worse, if you use plastic supermarket-brand pods.

Is it worth spending $4000+ to get the absolute best machine with the nicest milk quality you can make at home without the effort of a steamer? Maybe.

The Z6 does allow far more customisation and uses artificial intelligence to display the more commonly used coffee combinations on the front of the screen, which is nice, and if you’re very particular about your coffee and have a lot of money it could be a good choice. It did come out first in the home machine taste stakes in both tests, but it didn’t produce more aroma or beat an actual barista.

The barista coffee we bought for this experiment was $4.30, which is average for coffee in Melbourne, though still pretty expensive. You would have to forgo more than 1000 of those coffees (when you factor in the price of beans and milk) before such a fancy machine justified its purchase above the superior professional coffees available everywhere in Melbourne, and at least one or two cafes in Sydney.