It’s been called Illuminati Tinder, Tinder for A-listers, and The SoHo House of dating apps. Yes, I’m talking about Raya, and if you’re reading this, it’s probably because you’re eager to see what all the fuss is about, and start swiping away on influencers galore. And why wouldn’t you be? Amy Schumer, Joe Jonas, Channing Tatum are just a few of the celebrities who have been spotted on it, so if your dream partner is an accomplished creative, Raya is a goldmine. So, how do you get onto Raya? Well, not just anyone can join — and it might be a tad harder than you’d expect.

To use Raya, which is described as a “membership-based community for people all over the world to connect and collaborate,” you’ll need to apply. And just FYI, only 8% of applicants are accepted. Just for perspective, that means you have a better chance of getting accepted to Brown University, an ivy league school (with an acceptance rate of 8.5%). But before you get discouraged, here’s some good news: Contrary to popular belief, you don’t actually have to be Cara Delevigne Demo Lovato to get accepted (though it’s worth noting that both of these celebs have used it). In fact, one of my besties previously used Raya for a short period of time, while she’s a respected NYC photographer at a digital magazine, she’s definitely not famous. 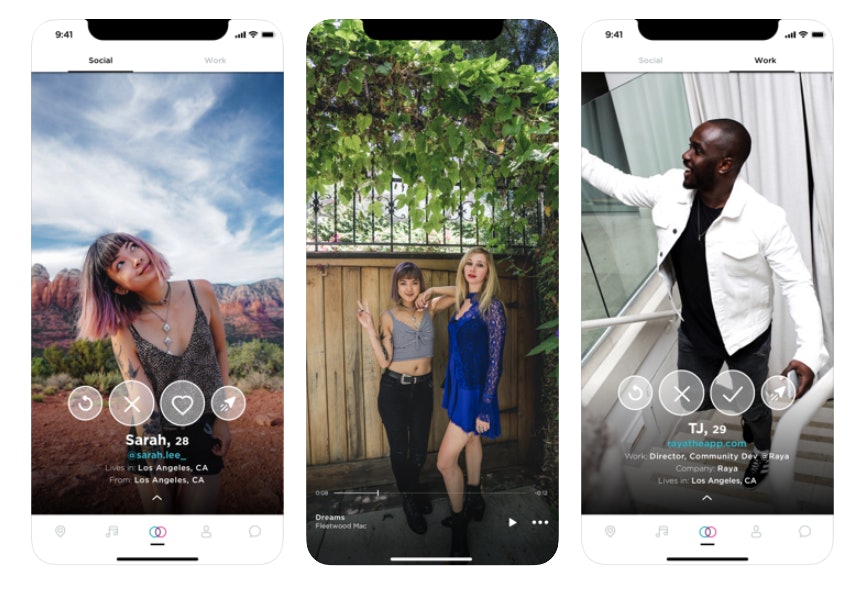 What do you need to get onto Raya? Well, for one, you need to have a referral from someone else who’s already been accepted into the community. It doesn’t matter if it’s a family member, friend, coworker, or acquaintance, but you need to get that invite in order to apply.

According to Raya’s website, applications are then assessed based on “algorithmic values and input from hundreds of members of the committee throughout the world.” So, in other words, there’s a human element to being accepted into the community — it isn’t just decided by a computer. Raya claims that the algorithm is always evolving and improving, but the committee members, who remain anonymous to each other, help to ensure a higher quality selection process. Additionally, these committee members come from diverse backgrounds, possess varied sexual preferences and interests, and represent a wide range of ages. The idea, of course, is to reduce potential biases in the acceptance process as much as possible (although Raya acknowledges that occasional oversights are inevitable).

“This process is constantly being changed for the better, but there is no such thing as perfect when it comes to things of this nature,” Raya states.

As for the length of the decision process, that can range, too — from anywhere between one day to several months. But rest assured that every single application is genuinely considered for admittance by Raya. It’s hard to know which qualities or accomplishments will secure you a spot on Raya. However, NYLON reports that some factors that can help your standing include having a cool/creative occupation and having a significant Instagram following. But before you start flashing your red bottoms, or boasting about your frequent yacht party hopping (who even are you?), know this: Being rich probably won’t help you. In fact, trying to brag about all your ballin’ could hurt your chances of getting accepted, or get you kicked off once you’re already in the community. In the guidelines and values section of their website, Raya states that applicants must not “have consistent displays of excessive shows of wealth.” Raya insists that how little or much money someone makes is considered insignificant on the app. “Rather, how someone spends their time, who they surround themselves with, and their intentions for how to engage and strengthen the community are the things Raya values,” the company adds.

So, in sum: Being hot, rich, and famous might not hurt you, but it also probably won’t get you in, either. What could get you in is an inside referral, an interesting career in a creative field, and a strong social media following.

By the way, you won’t get an official rejection letter if Raya doesn’t let you in. Instead, your application will likely just say “pending” indefinitely. In December of 2019, Business Insider reported that there are 100,000 people on the waiting list to get into Raya’s community of 10,000 members.

Raya’s selectiveness is part of its intrigue and appeal. Not only do you feel like a total boss if you’re accepted into the private community, but you can also expect a high-quality pool of potential matches. That said, if you don’t get approved, it’s not the end of the world. Lucky for you, there are other dating apps with countless viable prospects just waiting for you to swipe right on them — ones that don’t care how many social media followers you have, or require an insider invite.