With a larger screen and built-in camera for video calls and facial recognition, the Nest Hub Max is the new face of Google's smart home ambitions.

Unveiled overnight at the Google I/O developer conference in California, the $349 smart display builds on the Google Home Hub unveiled last year. With a 10.1-inch 1280×800 HD screen, the new device stands roughly 50 per cent taller, wider and deeper than its predecessor, which has undergone a price cut and been re-christened the Google Nest Hub. 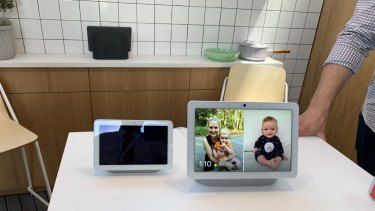 The Nest Hub Max is twice the size of the original Nest Hub (previously called the Home Hub).Credit:Adam Turner

Due to land on Australia shelves "this winter", the Nest Hub Max supports "Face Match" facial recognition, allowing users to receive personalised onscreen notifications such as calendar alerts. This includes a daily briefing when each user first enters the room in the morning and returns home at the end of the day, including information like weather forecasts, commute details and unwatched video messages.

Similar to Voice Match, Face Match supports up to six family members and links with Google's Digital Wellbeing platform to limit access to features and set time limits on services like YouTube.

The face recognition responds in less than a second thanks to the fact it relies on onboard processing rather than sending data to the cloud; a common theme with many new Google Assistant features, delivering both a performance and security boost. Encrypted facial recognition data is only stored the device and not in the cloud.

Like other Google smart speakers and screens, the Nest Home Hub addresses privacy concerns with the inclusion of a hardware switch which physically disables the microphone and camera. There isn't a switch for disabling one while leaving the other active, instead this can be done in the menus.

The facial recognition works on wide angles, activating as soon as users walk within the wide 127-degree field of view, rather than requiring users to walk right up to the camera and wait for it to recognise them. This helps make it simple and intuitive to use.

Auto framing keeps the speaker in the centre of the frame as they walk around the room. When multiple people are in view, it subtly continues to reframe the view to ensure everyone is in the shot. The camera handles difficult lighting conditions well, with the far-field microphone providing clear audio for those on the other end.

A green LED on the front of the device lets users know when the camera is on, and it blinks if you access the live video feed via the Nest app, which would make it difficult to spy on your housemates.

The camera means the Max can be configured to act as a fully-fledged Nest security camera, including support for Nest Aware alerts which detect motion and faces. Like all Nest cameras, this involves constantly uploading video to the cloud, which creates challenges for homes with limited upload speeds.

The screen can also be used to view the live feed from other Nest cameras around the home, with Google working towards bringing its Nest Hello video doorbell to Australia. 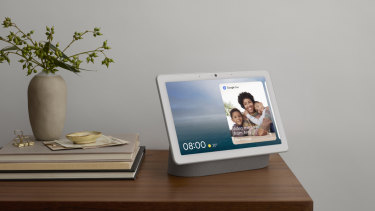 The Nest Hub Max can be used for video calls, or to send and receive video messages.

The camera can also recognise hand gestures, allowing users to look at the screen and raise their hand to pause music and resume playback, rather than shout over the noise.

The feature is part of a push to make interacting with Google Assistant less laborious and more intuitive. This includes "Continued Conversation", removing the need to say "Okay Google" before each request in an ongoing conversation. It also includes the ability to stop alarms by simply saying "stop".

The Nest Hub Max is fine for background music but isn't going to rock the room. While it goes quite loud with minimal distortion, those with an ear for detail will find it a little harsh while falling short in the low end.

The author travelled to California as a guest of Google.