According to senior administration officials with knowledge of the forthcoming report, however, the briefing only appears to confirm the UAP aren’t products of U.S. military or government technology, per a New York Times preview published June 3. That the Pentagon can’t conclusively eliminate other possible explanations for observations of the mysterious aircraft means the popular alien theory remains in play—for now.

Why Is the Government Investigating UFOs?

How did we get here? In August 2020, the Department of Defense (DoD) officially approved the establishment of an Unidentified Aerial Phenomena Task Force (UAPTF) for investigating the sightings of UAP. The task force is the first on-the-books government program affiliated with UFO research since a 2000s-era unit that analyzed unmanned aerial vehicles (UAVs) and other UAP lost its funding in 2012, even though multiple sources confirmed with Popular Mechanics that the unit remained active in secrecy after its shuttering.

The DoD formed the UAPTF to “improve its understanding of, and gain insight into, the nature and origins of [UAP],” Pentagon spokesperson Sue Gough told Popular Mechanics at the time. “The mission of the task force is to detect, analyze, and catalog [UAP] that could potentially pose a threat to U.S. national security.”

In June 2020’s Intelligence Authorization Act (IAA), the Senate Select Committee on Intelligence (SSCI) authorized appropriations for fiscal year 2021 for the UAPTF and supported its efforts to reveal any links that UAP “have to adversarial foreign governments, and the threat they pose to U.S. military assets and installations.”

In the IAA, the Select Committee on Intelligence said it “remains concerned that there is no unified, comprehensive process within the federal government for collecting and analyzing intelligence on [UAP], despite the potential threat,” and so it directed the task force to report its findings on UAP, “including observed airborne objects that have not been identified,” within 180 days.

When former U.S. President Donald Trump signed the coronavirus relief and government funding bill into law in December 2020, it contained the IAA for Fiscal Year 2021, which means the UAPTF must report its findings to Congress by June 25. That date is rapidly approaching, and this week’s New York Times report offers the first major clues about what the briefing does and doesn’t include.

What Does the UFO Report Say?

The most likely root of the unexplained phenomena may be from foreign adversaries, the New York Times suggests. The Pentagon report allegedly examines more than 120 incidents that U.S. Navy pilots witnessed over the last two decades, as well as sightings from foreign militaries. Intelligence officials believe “at least some of the aerial phenomena could have been experimental technology from a rival power, most likely Russia or China,” the Times reports.

One official with knowledge of the report told the Times that American intelligence and military officials are worried “China or Russia could be experimenting with hypersonic technology” designed to evade the U.S. military’s missile defense technology. That seemingly tracks with what a former U.S. intelligence official recently revealed.

In March, John Ratcliffe, who served as the Director of National Intelligence Community from May 2020 to January 2021, told Fox News’s Maria Bartiromo the Pentagon is sitting on “lots of reports” that include sightings of objects that “frankly engage in actions that are difficult to explain.” Ratcliffe said both U.S. Navy and Air Force pilots and satellite imagery have spotted the UAP.

The objects reportedly made “movements that are hard to replicate that we don’t have the technology for, or traveling at speeds that exceed the sound barrier without a sonic boom,” Ratcliffe said. “In short, things that we are observing that are difficult to explain.” 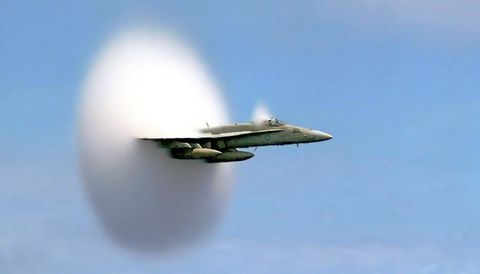 When an aircraft increases its speed, pressure waves build up on it and eventually coalesce into a single shockwave. When the plane outruns that shockwave and travels faster than the speed of sound in air, it causes a sudden change in pressure, which in turn creates the sonic boom. There’s no publicly available scientific data to suggest any aircraft can break the sound barrier without producing a sonic boom; while engineers can take steps to try to reduce sonic booms, physics says it’s impossible to outright eliminate it.

Ratcliffe admitted the Pentagon simply can’t rationalize some of the reported sightings:

Are the UFOs Actually Foreign Technology?

It’s well known that both China and Russia have developed hypersonic weapons. Last fall, for example, a Chinese video appeared to show a People’s Liberation Army Air Force bomber equipped with a hypersonic weapon system, while Russia also tested a new missile that traveled faster than Mach 5 and reportedly struck a target at sea for the first time.

Just last week, meanwhile, Russia announced it’s building a single-engine, hypersonic fighter jet. And China is reportedly working on a “sodramjet”—short for “standing oblique detonation ramjet engine”—that apparently reached nine times the speed of sound in a wind tunnel test. The engine could power an aircraft to reach anywhere in the world within two hours, the makers say.

If the UAP in the Pentagon report were indeed Chinese or Russian aircraft, “that would suggest the two powers’ hypersonic research had far outpaced American military development,” U.S. officials told the Times.

What Else Do I Need to Know About UFOs?

The imminent release of the UAPTF’s report is the culmination of recent developments surrounding UFO research, including the U.S. Navy’s April 2020 release of three videos that show unidentified aerial vehicles are genuine. The official drop came several years after the notorious clips first leaked online and properly ushered in the UFO renaissance.

In 2019, the Navy confirmed the three videos, taken by Navy pilots, indeed show UAP, but the service also said the footage should have never been released to the public in the first place. The Pentagon released the videos in order to “clear up any misconceptions by the public on whether or not the footage that has been circulating was real, or whether or not there is more to the videos,” a spokesperson told Popular Mechanics at the time.

The three videos in question show two separate encounters between Navy aircraft and UAP. One video was taken in 2015 off the East Coast by an F/A-18F fighter jet using the aircraft’s onboard Raytheon AN/ASQ-228 Advanced Targeting Forward-Looking Infrared (ATFLIR) Pod. The other clip, also recorded with a Super Hornet ATFLIR pod, was taken off the coast of California in 2004 by pilots flying from the aircraft carrier USS Nimitz. In the videos, air crews loudly debate what the objects are and where they came from.

In each case, the objects in the videos undertook aerial maneuvers that aren’t possible with current aviation technology. In the 2004 incident, according to The New York Times, the objects “appeared suddenly at 80,000 feet, and then hurtled toward the sea, eventually stopping at 20,000 feet and hovering. Then, they either dropped out of radar range or shot straight back up.” In 2019, the Nimitz witnesses exclusively shared their accounts with Popular Mechanics.

The UAPTF is expected to release an unclassified version of its report to Congress by June 25. But the report will also include a classified section, which means it’s “likely to continue to fuel speculation that the government had secret data about alien visitations to Earth,” one official told the Times.